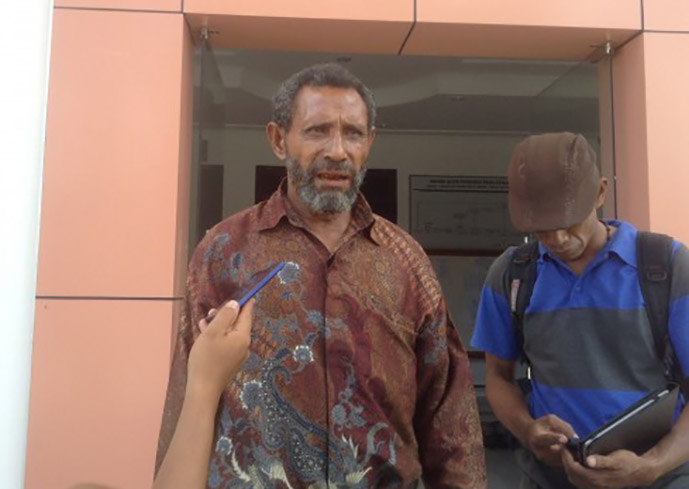 Jayapura, Jubi – Yeresiam Gua Tribal Chief called for indigenous Papuans to be united to reject the oil palm plantation to operate in the land of Papua, especially in Yeresiam Land of Nabire, Papua.

“We appeal to all, let us be together to stop the oil palm plantation in our land,” Daniel Yarawobi said to the participants in the open discussion on “Oil Palm Impact Towards the Indigenous People,” that was held at Intan Jaya Student Dormitory in Waena, Jayapura City, Papua on Monday (4/4/2016).

All parties, in particular Papuans, who are currently at the government bureaucracy, NGOs, customary, youth, women organizations, journalists and students must be united to reject the oil palm plantation, because it only gives profits to the company and business owners, while a catastrophe for the people. People will lose the land tenure rights, the ownership of the land with its entire natural resources, including plants and animals that previously of their economic resources.

“We have lost. Floods happened to us. We have hurt. We have been victims for several times,” he said to point the flooding that recently happened in Yeresiam area on 25 March 2016.

‘Where we should go to speak our voice? We have done all efforts to be heard by the government, to meet with the Nabire Regional Legislative Council and Nabire Regent, but it never produced a result until now,” he said.

Since October 2015, Yeresiam people made a lawsuit against PT Nabire Baru at State Administrative Court in Jayapura to sue its business permit issued by the former Papua Governor Barnabas Suebu in 2008. The legal process is now still undergoing.

“We sued the company to go from the land of Yeresiam, because it violated the procedure to come in our land. We never signed any letters to state the land hand over. Our name was written down, but others to sign upon our name,” he said.

Tolak Sawit activist Emile Fakdagur from Workwana Village of Keerom Regency provided a similar testimony. He said the oil plantation in Keerom came with pleasant promises but never realize it.

“Sending the children to school and university had never realized. This oil palm plantation is really pointless. It’s a bunch of lies. The company only brought a catastrophe,” he said supporting Yeresiam people to reject the oil palm plantation. (Mawel Benny/rom)

Conservation Province Status Should Not Result in Exploitation