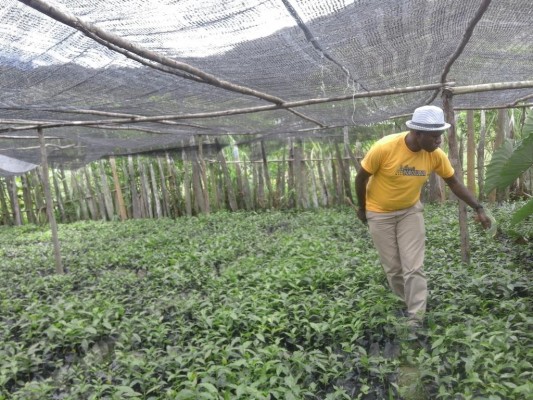 The Director of YAPKEMA, Hanok Herison Pigai, said the foundation has run the program since 2006 to introduce the local coffee of Meeuwodide.

“When we conducted an assessment to the community, they said we are late because they would gradually leave the coffee cultivation due to the market issue. We have worked together with the Oxfam New Zealand, they helped us to find a market,” he told Jubi in Enarotali, Paniai on Monday (8/2/2016).

He said P-5 Moanemati was closed in 1996, from Makataka to Mapia. Lacking of market demands reduced the production of coffee. But due to promotion by YAPKEMA, the demands on Moanemani coffee has been popular in Jakarta. Now there are many demands for Paniai and Deiyai coffees from many parties.

“We do this promotion to sell the community’s product as well as to get buyers. Therefore we build a café in Bogor,” he said.

“The local wisdom is still existed, but the habit to spend money unwisely is also raised. Yes, because people are now turning consumptive because they are being spoiled with cash, rice for poor program, and so on. So their hard work motivation has changes and start to fade,” he said.

According to him, YAPKEMA has provided the coffee seeds in Dogiyai and Deiyai to attract the local people to get back on coffee cultivation.

“We do not use the chemical fertilizer, but the mix of organic fertilizer and rice husk from Nabire. We also trained the local people to provide the coffee seeds based on the standard of Provincial Plantation Office. The officials have already visited on the ground and stated it has fulfilled the standard. With the training as well as the certification, we will ready in Deiyai and Dogiyai,” he said.

Deiyai resident Martinus expressed his appreciation on the program. He expected the international community would recognize the local coffee. (Hengky Yeimo/rom)

IN DISTRICT WAAN, THE PRICE of PETROL SUBSIDIES SOLD RP 30,000 PER LITER

Area of rice fields in Nabire is increasing every year