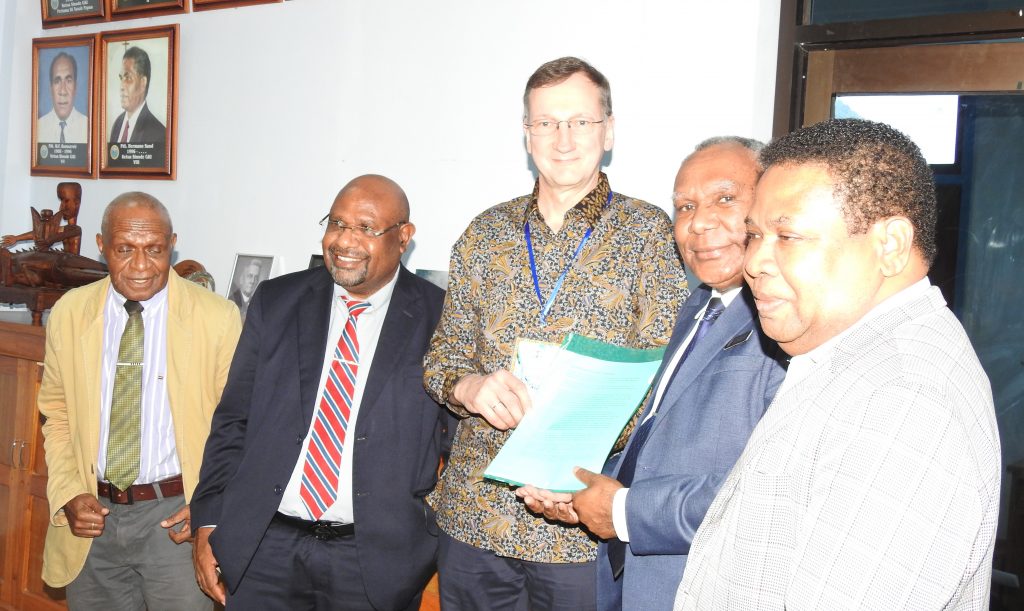 Church leaders in Tanah Papua take a picture with Peter Prove, Director of the Church Commission for International Affairs (CCIA) of the World Council of Churches (WCC). – Doc. Jubi

Jayapura, Jubi – An ecumenical delegation organized by the World Council of Churches (WCC) visited Indonesia on 15 – 22 February 2019, including the provinces of Papua and West Papua, where the cases of violence and discrimination against indigenous peoples were recently highlighted in a joint statement by five holders of the UN human rights mandate.

Peter Prove, the Director of International Affairs, said the purpose of this visit is to express solidarity and encourage church members and relevant organisations in their efforts to enforce justice and peace in Indonesia. As part of the ‘WCC Justice and Peace Pilgrimage’, this visit also focuses on issues connected with interreligious freedom and harmony in Indonesia and the human rights situation in Papua.

“The delegation led by the Communion of Churches in Indonesia (PGI) and the Christian Evangelists Church in Tanah Papua (GKI-TP),” wrote Prove in a release received by Jubi on Monday (02/25/2019).

During their visit in Papua and West Papua provinces, the delegation members met with some local church leaders, victims and survivals of human rights and conflict violations, indigenous leaders, the governors of both areas and representatives of local governments, and the representatives of local governments, Indonesian military and police in Jayapura, Manokwari, Merauke and Wamena.

Furthermore, Peter Prove said that it had been 20 years since the last delegation from WCC visited Papua due to poor access to Papua region. “Now we appreciate the fact that the authorities allow our delegation to visit Papua, and we hope this will be a beginning of more openness and open access for others,” continued Prove.

However, the delegation members felt worried after learning from nearly all Papuans they have met that many critical issues in Papua continued and tended to get worse.

Dr Jochen Motte, the Deputy General Secretary of the United Evangelical Mission who joined in the WCC visit in Papua in 1999 claimed the recent issue he had heard during this visit is not different with the problem he had heard in his last visit in 1999.

“The problem that we heard at that time (in 1999) is still the same as the problem that we are currently hearing (in 2019). And the special autonomy status has not yet been able to meet the expectations of indigenous Papuans and to end discrimination and human rights, ” said Jochen Motte.

According to Motte, the Special Autonomy Law that enacted in 2001 supposed to be a platform for Papuans to play a role in determining their political, social, cultural and economic developments in the Republic of Indonesia. However, nearly all Papuans they met during the visit, including government officials, said that this policy is a failure, and its most important element has not implemented yet.

The delegation also worried after learning that due to migration and demographic change, indigenous Papuans are now a minority in their land. Land grabbing, environmental degradation and accelerated forest and river destructions which are part of Papuans’ livelihood are complaints that many delegation members heard.

Dr Emily Welty, the Deputy Moderator of the WCC Commission on International Affairs, even concluded that indigenous Papuans appeared to be systemically marginalized and excluded in all areas of life.

Meanwhile, in Wamena and Jayapura, the delegation members met some displaced people who fled from conflict and security forces operations in Nduga Regency after the murder of 21 road construction workers on 2 December 2018 by an alleged armed group. The total number of refugees is still unknown, but many are estimated to be hiding in the forest.

Furthermore, Bishop Abednego Keshomshahara of the Evangelical Lutheran Church in Tanzania acknowledged that he saw so many children among the victims are afraid to return home due to the presence of the military and police in their villages and schools.

During their visit in Papua, the delegation received a joint request from leaders of four churches in Papua, Indonesia (GKI-TP, KINGMI Church in Tanah Papua, Evangelical Church in Tanah Papua (GIDI), and the Fellowship of Papuan Baptist Churches) to call the international ecumenical support for comprehensive political dialogue to resolve the situation in Papua.

“A precondition dialogue is a definite and only way to solve the problem in the situation that we encountered in Papua,” said Rev. James Bhagwan, the Secretary-General of the Pacific Church Conference. (*)