With the help of the ‘Jedi Knights’: Govt excuses for food estate threatening environment and Papuan forests (Part 3) 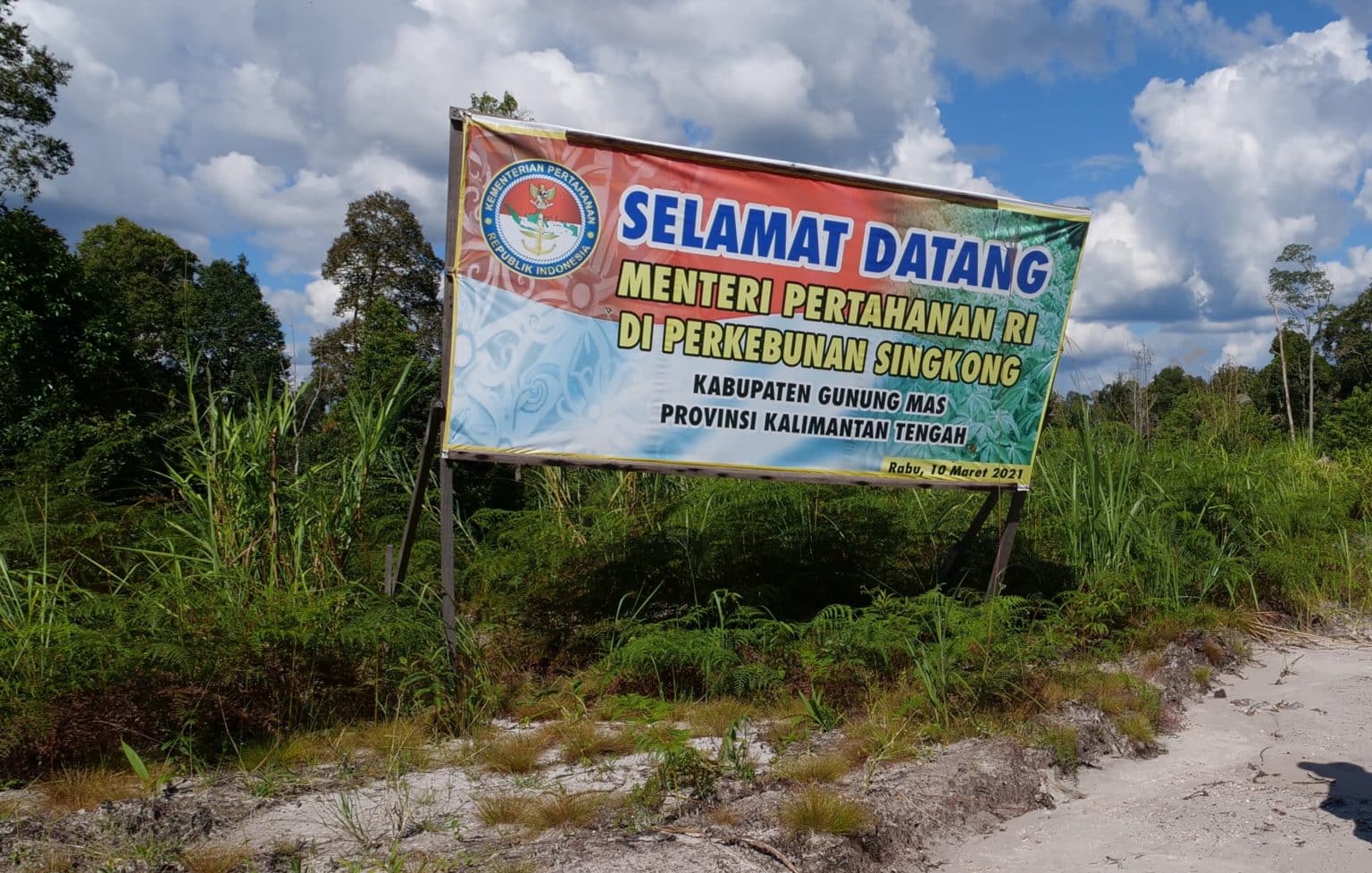 Welcome banner in the lane of the food estate logo of the Ministry of Defence (left), and the cassava plant small-sized in August 2021 – Tempo

As of January this year, food estate players have been seemingly seeking for investment from abroad to sponsor their ambitions.

Based on the document retrieved by our reporter, a company called Agrinas was actively offering investment proposals for a food estate program to the South Korean government. The figure was fantastic: Rp 4.17 trillion (US$291.9 million) only for plantations in Borneo’s Gunung Mas Regency.

In the proposal, Agrinas introduced itself as a company owned by the Ministry of Defense that reported directly to Defense Minister Prabowo Subianto. Agrinas also pledged its dream to become the world’s largest “upstream-to-downstream” producer of cassava flour, with one million hectares of plantations and 34 factories throughout Indonesia.

Agrinas also weirdly said that such an investment could “improve South Korea’s food security” while the program was originally planned to meet domestic consumption.

Both Agrinas and the Ministry of Defense denied that they were partners in the food estate program.

Agrinas denied they had submitted an investment proposal to the South Korean government but did not respond to our questions regarding the documents we found either.

Despite these objections, our investigation found that Agrinas was involved from the very beginning of this program. While the extent of its involvement is unclear, evidence suggests Agrinas plays a key role in the ministry’s plan to establish one million hectares of cassava plantations. According to its own calculations, Agrinas can earn of up to trillions of rupiah.

Data shows that the corporate structure effectively provides control and oversight to Prabowo and his cronies. Many of them are affiliated with Prabowo’s Gerindra Party. Some also hold positions in government.

Muhammad Haripin, a security and defense expert of the National Research and Innovation Agency (BRIN), described the overlapping positions as a “dead triangle”.

“The process between business interests, private interests, public interests, and government interests has become blurred,” he said. “Everything is through one door. People can change clothes quickly, as if [working] for a good cause, even though it is for their own personal or group interests”.

Agrinas was founded by a social foundation assisted by the Ministry of Defense, the Education and Housing Welfare Foundation (YKPP), which was initially established to help provide housing and education for retired and active soldiers. But such a goal changed in April 2020, when a retired Indonesian Military (TNI) general named Musa Bangun became chairman of the YKPP, during the same time Agrinas was established. Musa Bangun also holds a high position in Prabowo’s political party.

Legal documents that we found show YKPP changed its name to the Development of Defense Resources Potential Foundation (YPPSDP) in early 2021. The foundation purpose was expanded, now included “organizing business activities” and supporting the government “in the national defense field”. A number of military figures later joined the management, including the current TNI commander and Prabowo himself.

In Indonesia, foundations are allowed to hold shares in private companies on strict rules. According to Law No.16/2001 on Foundations, capital participation of a foundation in one business entity is limited to a maximum of 25 percent of the total value of the foundation’s assets. Legal researcher from the Indonesian Law and Policy Study Center Ronald Rofiandri said that the provision was intended to draw the line between the foundation’s goals as a non-profit organization and the goals of a profit-oriented company.

However, based on the YPPSDP Articles of Association and Bylaws document we obtained, the YPPSDP’s shareholding in Agrinas represents almost half of the foundation’s total wealth. The top ranks of Agrinas are filled with names of members of Gerindra, the party led by Prabowo. Some of them are people close to Prabowo: Rauf Purnama, a businessman in his 70s and president director of Agrinas, ran for the legislative with the Gerindra Party in the 2019 election. He was also part of Prabowo’s campaign team during the presidential election; Agrinas deputy managing director, Dirgayuza Setiawan, now in his early 30s, started working for Prabowo shortly after graduating from a university in Australia. He once wrote Prabowo’s speech. In an interview with The Jakarta Post in 2014, he said his father had been Prabowo’s personal doctor.

When running in the 2014 presidential election, Prabowo called Dirgayuza one of three “Jedi Knights” — referring to a rank in the Star Wars franchise. And by calling them Jedi Knights, Prabowo meant “priviledged young men who received higher education abroad and is close to the him”.

Two other Jedi Knights, Sudaryono and Sugiono, helm Agrinas from the commissioner seats, overseeing the daily performance of the board of directors. Sugiono is also a member of Commission I of the House of Representatives, whose job is to oversee the Ministry of Defense’s budget. In fact, there are regulations that prohibit politicians from working in fields related to their duties as lawmakers.

“The conflict of interest [in the food estate program] is obviously large,” said Ronald Rofiandri.

When we tried to ask Agrinas about this, they said Sugiono had resigned from his position at Agrinas. However, his name was still listed as a member of the Commissioner in the company profile document registered with the Ministry of Law and Human Rights General Legal Administration Directorate General as of Oct. 1, 2021.

Agrinas was engulfed in controversy in just three months of its establishment. In July 2020, Tempo Magazine reported that the then Minister of Maritime Affairs and Fisheries, Edhy Prabowo — a Gerindra politician — canceled the export ban on lobster seeds and granted export permits to four companies connected to Gerindra — one of them is Agrinas, which, actually has no experience in the lobster industry or export-oriented industry.

As a result of the scandal, Edhy had to be removed from his position as minister. Four months later, in November 2020, Edhy was detained by the Corruption Eradication Commission (KPK). In July 2021, he was charged with accepting a bribe of Rp 25.7 billion related to the cancellation of the export ban on lobster seeds, and was sentenced to five years in prison.

However, unlike Edhy, Agrinas was not indicted by the KPK. While the lobster seed export graft case was being investigated, the company was helping the Ministry of Defense open a cassava plantation in Gunung Mas.

The investment proposal offered to the South Korean government also mentions Agrinas as the party developing plantations in Gunung Mas. On page 4, it reads as follows: “We are establishing the first factory and plantation in Central Kalimantan with the full support of the President”, with a map of the program location displayed just below. The metadata information shows that the author of the proposal is the deputy managing director of Agrinas, Dirgayuza Setiawan.

Yetty Komalasari Dewi, head Lecturer at the Faculty of Law, University of Indonesia, questioned how Agrinas could represent the Ministry of Defense even though its status was a private company, meaning that profits did not automatically flow into the state treasury.

“The Ministry of Defense is part of the government. Why didn’t it create a state-owned company instead?” she said. “I’m sorry but it looks to me like a ‘suicide’”.

When asked about what role Agrinas played in this food estate program, in a written statement, the Ministry of Defense said that they had “never appointed a partner company to work on CLS,” referring to the Strategic Logistics Reserve (CLS), a food security program initiated by the ministry.

Meanwhile, Agrinas itself said in a written statement: “Until now Agrinas has never been a partner of the Food Estate program at the Ministry of Defense”.

Regardless of the nature of the relationship, we found evidence that Agrinas staff worked on the ministry’s food estate program. One of them is Mahesa Mukhsin, who joined Agrinas after completing his master’s degree in business administration from the University of Oxford, England. Mahesa has been the director of Strategic Planning and Risk Management for Agrinas since January 2020. On his LinkedIn profile, he mentions that at the same time, he is holding a senior position at the Ministry of Defense.

In his profile, Mahesa claims to have played a role in “planning, supervising, and leading” the ministry’s first cassava plantation development project. Mahesa’s LinkedIn profile immediately changed after we asked Agrinas about this matter. He deleted all information related to the Ministry of Defense.

Rauf, Dirgayuza, Sugiono, and Mahesa did not respond to our request for an interview. They also declined to comment on the various information we found. (*)