Why special autonomy cannot bring improvement to Papuans and why it cannot overcome separatism? 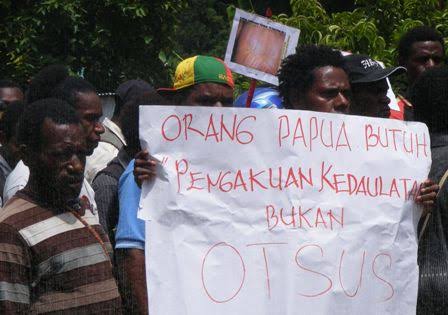 The Special Autonomy Law that implied to the implementation of the autonomy funds from the Government of Indonesia to Papua Province (yet it shared with West Papua Province that established in 2007) has been 17 years on 21 November 2018. However, many people claimed that some goals have not yet achieved during this period.

DR Agus Sumule, a team member who drafted the Special Autonomy Law, said overall it’s still under the expectation, though this law was stipulated for two reasons, namely to improve the welfare of people and to be against separatism.

“The improvement of people’s welfare can be measured using the modest method, and that also applies throughout the world, such as the Human Development Index (HDI). Meanwhile, the HDI in both provinces of Papua and West Papua is still the lowest. Although there are some efforts to scale up the HDI and the leap was considerably big, but it’s not big enough if compared to other provinces. The existing method is not effective enough. Therefore, it needs another breakthrough,” Sumule told Jubi by phone on Thursday, 22 November 2018.

“On the other hand, the Special Autonomy has been given with the expectation that the separatist movement will fade away. Therefore the Special Autonomy Law also includes some aspects such as the establishment of the Truth and Reconciliation Commission and so on. Because it doesn’t work, so who knows that the threat has gone.”

Apart from claims of progress in many sectors, continued Sumule who’s also the Dean of the Faculty of Agriculture of the University of Papua, Manokwari, West Papua Province, until now the  autonomy policy still cannot overcome the problems of both provinces.

Education must start from villages

One of the main objectives of the Special Autonomy fund for Papua is to increase the human resources through education. Although some efforts made in increasing Papuan human resources have shown some results, these do not provide both provinces with better condition.

Then Sumule took an example that currently, the number of students in Papua and West Papua is approximately 800 thousand, which half (400,000) is indigenous Papuans. Of that number, more than 200 thousand are at the elementary school. However later, more than half do not continue their study to junior high school.

Furthermore, He said it needs a breakthrough in education, for example, improving primary education. “Many say that we need to construct a dormitory. How could it be? How can we build a dormitory for 800 thousand people? That’s impossible.”

To solve this problem, he suggested that villages should become a target for education rather than cities by providing schools from the lower to higher levels.

No stipulation for a 25-year period

In regards stipulation, Agus Sumule also corrected people’s assumption that the Law No. 21 of 2001 about the Special Autonomy for Papua will terminate after 25 years running.  He said it’s not true. This arrangement only applied for the provision of  (autonomy) funds, while the regulation will still there though there is no guarantee that it would stand onwards (though it can be changed if necessary). However, there is no article in the law stating that this regulation only valid for 25 years.

“What would be ended (25 years) is related to finance,” said Sumule.

If the Special Autonomy Fund discontinued, it must ensure that the availability of funds to continue development. However, if it continues, we should consider its distribution due to nowadays many indigenous Papuans have become a minority in many regions of Papua and West Papua provinces. If there is no change in the allocation of funds, the beneficiaries who might receive compensation (and benefits) must be not indigenous Papuans.

He also maintained if the central government is willing to continue the provision of the special autonomy funds, how can they assure that the funds do not become ‘sugar’ that attracts more migrants to Papua. “That’s the question. Surely this is a big problem,” he said.

Separately, Chairman of the Papuan House of Representative Yunus Wonda said the implementation of Special Autonomy in Papua still gives uncompleted assignments to do.

According to him,  there are a few of policies covered in the articles of the Special Autonomy Law have not implemented yet, such as the recognition of local political party, the establishment of the Truth and Reconciliation Commision and the human rights court as well.

“The appointment of 14 representatives of indigenous Papuans in the Papuan House of Representatives has done, but not other things. Until now the central government has not seriously resolved many cases of alleged human rights violations in Papua by establishing the Truth and Reconciliation Commission,” said Wonda.

Moreover, he said that the main issue in Papua is the human rights violation because it has a tremendous impact on other issues. Hence, its resolution could bring a sense of justice to both victims and their families. Both the settlement process and resolution of human rights violations have become an international concern, so the Government of Indonesia must take this seriously.

“This is a crucial agenda that needs to address, and we count on the president elected for the next period,” he said.

Meanwhile, Papua Governor Lukas Enembe in the commemoration day of the Special Autonomy Law held in Gedung Olahraga Cenderawasih, Jayapura, Papua on Wednesday (21/11/2018) said during its 17-years journey in Papua, the Special Autonomy Law is still not perfect as expected by many people, due to its weaknesses and limitation. To mention one, he exemplified that Papua never had a proper grand design from the beginning. (*)

Parties Urged to Unite on Seats for Indigenous Papuans