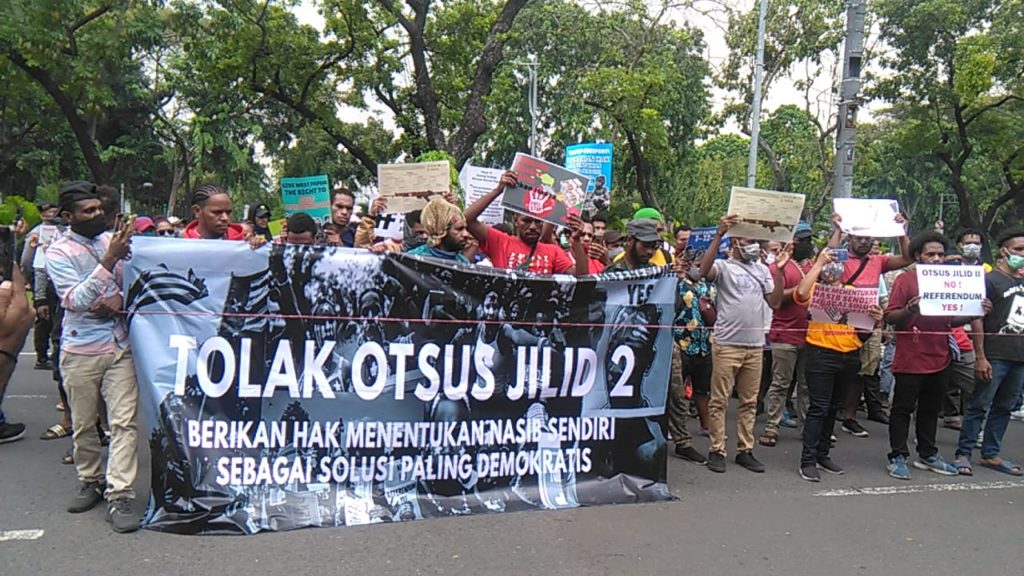 Illustration Papuan students in a demonstration in front of the Ministry of Home Affairs Office in Jakarta to protest the Special Autonomy extension, Tuesday (14/7/2020). – Jubi/ Ambros Mulait Courtesy

Sentani, Jubi – Papua should become a sovereign territory following the end of the autonomy policy era. The claim has aligned with the wishes of the people of Papua.

“Sovereignty has been a long time claim of Papuan people in some congresses, and it has never changed until today,” said Zadrahk Taime, the Papuan Customary Council Chairman for Mamta Region, on Monday (20/7/2020).

“The struggle for Papuan sovereignty has significantly linked to international law. The Government of Indonesia should recognise it,” said Taime.

Moreover, he said if Papua becomes a sovereign country, Papua and Indonesia can still help each other in overcoming shared problems. In this sense, Papua will consider Indonesia as a ‘foster father’.

“Indonesia workers will still be able to work at PT. Freeport, while in turn, Indonesia should assist Papua to deal with its domestic affairs,” said Taime.

In the meantime, Abner Giyai from the Papuan Customary Council for Grimenawa Region said Papuan people never found justice in development since the implementation of the Special Autonomy policy in 2001. The landowners had never been invited to involve in the processes of planning or implementation of the empowerment program for indigenous Papuans.

“There were no job opportunities and access to the market for local communities. When we asked for justice, it, in turn, was politicised (accused as separatists),” said Giyai.

He claimed the Government of Indonesia has never taken a lesson and evaluated the implementation of development in Papua. “During the administration of Widodo-Kala, Rp100 trillion had spent (allocated) to Papua but that’s it (the results were invisible).” (*)