When Persipura fights racism on the field 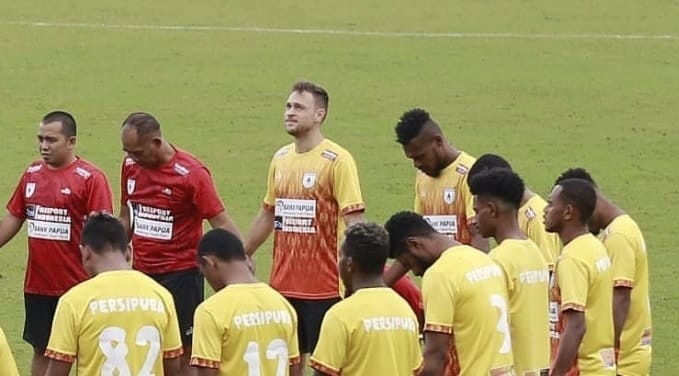 Persipura when rehearsing Batu, Malang not long ago. - Jubi/courtesy

Persipura when rehearsing Batu, Malang not long ago. – Jubi/courtesy

Jayapura, Jubi – Sometimes people think that the football competition in Indonesia was free of racism, but it wasn’t, especially during the match or practised before the game.

It was even getting worse when the referee gave a controversial decision that made players explosively emotional.

Persipura former head coach M Raja Isa from Malaysia once warned his players to be cautious during the match when the referee often gave a controversial decision which can trigger players to be emotional and lose concentration on the game.

“Though we always prayed such disruptions often came either from rival teams, supporters or referees,” he told Jubi.co.id.

And at such times like these, they heard racial slurs come out from those who watched them practice or played in the match.

Coach Isa had told his concerns to Koran Tempo, 22 December 2007 when Persipura had a lousy experience while playing in Balikpapan and Jepara.” The boys couldn’t concentrate on the match because people shouted them ‘monkey’.”

According to him, his players often got racial slurs from supporters that disturbed their concentration.

Another case was experiencing Persipura coach from Brazil Jacksen F Tiago who said the insults to the players and coach of Persipura team must always get rewarded with victory and support from all supporters in Papua. Therefore, he was prancing around when Nelson Alom set a goal for Persipura team to defeat Sriwijaya FC at Jakabaring Stadium amid racism insults and shouts.

In response to racism slurs in the Indonesian football, an Aremania supporter from Depok sent a letter to Tabloid Bola edition Tuesday, 15-22 December 2009 with the title ‘Apologies for Persipura’.

In his letter, he said,” “As a supporter of Aremania, I regretted to see the match coloured with racist shouts from the audience at Kanjuruhan Stadium, Malang…

To all members of Persipura team and their supporters, especially Jayapura residents, I on behalf of Aremania throughout Indonesia sincerely apologise if some Aremania/Aremanita had hurt your feelings,”

Meanwhile, the Chairman of Discipline Commission of Indonesian Liga Board at that time, Hinca Panjaitan, did not give any penalties to the audience because of lack of evidence. However, Persipura player Ortisan Solossa got mad and crushed the stadium’s bench at that time because of this racial slurs, and Persipura should pay a fine for his action.

“We understand they did it to respond to racial slurs from the audience,” said Panjaitan at that time. Consequently, Persipura famously known as Mutiara Hitam, the Black Pearl, must pay a fine of Rp 5 million in the ISL 2009/2010 competition in the match between Persipura versus Arema FC.

Concerning racial slurs, the Organizing Committee of Arema FC Abdul Haris had appealed Arema supporters not to sing racism chants on the match Persipura versus Arema FC held in the sixth week of Liga 1 2018 on Friday (27/4/2018) at Kanjuruhan Stadium, Malang.

Haris admitted that those racial chants often performed every time their team played against Persipura.

It needs a tough mentality

The European League has returned to the game after some break due to the pandemic, but have football supporters stopped their monkey’s shouts?, a columnist from face2face Africa.com criticising racial shouts and chants towards the African players. Have we turned our monkey chants out of the corner? Would we still hear how “strong” but not “smart’ African players should?

It needs a tough mentality for any African or black footballers everywhere in the world to face racial shouts, especially when they get compared to a monkey. Those players had experienced hearing a monkey-like sound to get banana peels thrown in the stadium.

Even former Barcelona striker Samuel Eto from Kamerun should mimic monkey’s walk every time he set a goal on the match. No anger anymore, but humour.

Meanwhile, the England team winger Raheem Sterling also commented on the racism acts during a match versus Montenegro. The 24 years old player experienced racial shouts when the England team played against Montenegro in the Euro 2020 qualification round at Pod Goricom Stadium on Tuesday (23/3/2019).

There was a scream mimicking the monkey’s voice aimed at this black England player. It was not acceptable but still happened today. The racism against black football players gave them patience and a tough mentality to compete on national, regional and international levels. It encourages FIFA to announce that it will fight racism in world football. (*)

Another armed conflict occurs in Intan Jaya, this time killing an Indonesia soldier

NINE HOUSES WILL BE EVICTED, THE FAMILIES COMPLAIN TO DPRP OF MERAUKE