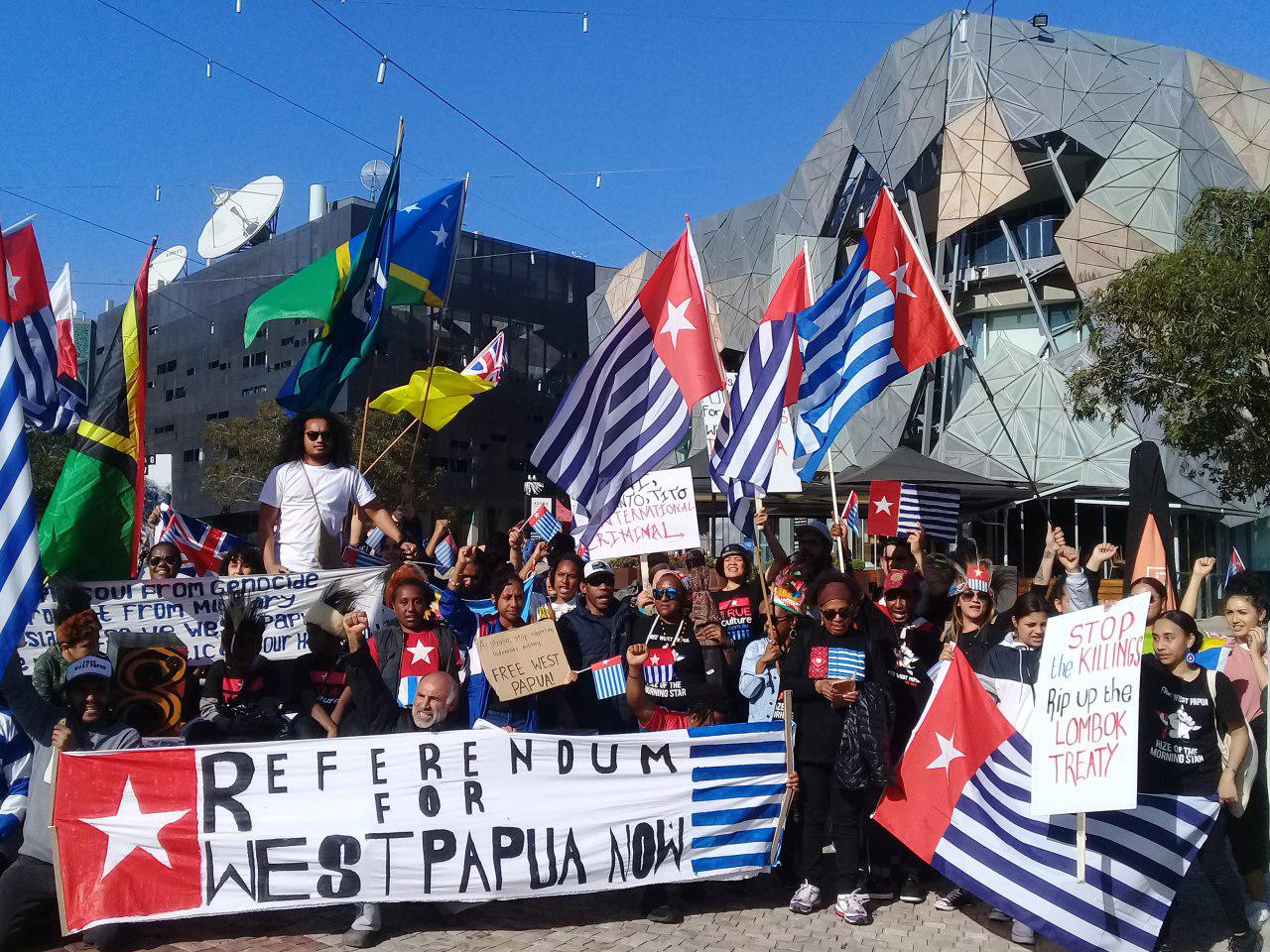 Melbourne, Jubi – Dozens of people stands in solidarity with West Papuans in front of the State Library Victoria on Saturday (14/09/2019) for calling the Australian Government to against human rights violations occurred in West Papua.

He also urged the Indonesian Government to restore the internet access in West Papua and allow international journalists free access to West Papua. “On behalf of the Melbourne West Papua community and our brothers and sisters in West Papua, I strongly urge Indonesia to withdraw its more than 6000 non-local military forces from West Papua to allow the situation there to stabilize,” said Mr. Obamak.

Meanwhile, the solidarity rally was opened with speeches from speakers representing the Australian first nation, local councilors, West Papuan leaders and students. Speakers called the Australian Government to pay more attention to what have been happening and West Papua and to take action to end oppression and human rights violations against West Papuans.

Moreland Councillor Sue Bolton said in her speech that Australia could do a lot to stop the oppressions and violations in West Papua. “What Australia does will going have to impact to West Papua. Australia through different government has tragically supported the Indonesian Government to violate West Papuans through training Indonesian military forces, mining companies that contribute to the killing and torture of many West Papuans. Meanwhile, Darebin Councillor Mark Riley in his speech emphasized the needs of open access for journalists to West Papua.

In the meantime, Papuan student Cyndi Makabori said as young West Papuan student who’s living in Australia, she is fortunate for not experiencing discrimination, torture, detention or mockery like other Papuan students in Indonesia. She also criticizes that during 57 years of integration, Indonesia has committed more than five hundred thousand of murders. It means Indonesia has failed to civilize and educate its citizens about the value of humanity and human rights. Finally, in her speech she thanks to non-Papuan supporters who stand in solidarity with West Papuans. She acknowledges the spokesperson of Free West Papua Surya Anta Ginting who’s the first Indonesian citizen arrested for treason.

After speeches, the crowd goes for a rally towards Federation Square. During the rally, they continuously chanted “Papua Merdeka,” “Free West Papua”, “Kami bukan merah putih” and “Indonesia Out”.
A supporter from Vanuatu who wish anonymous said she joined the rally to show her solidarity to West Papuans. “In solidarity as Pacific region. We are Melanesians; and all together we are strong. We support sovereignty as an obligation to the international laws.”