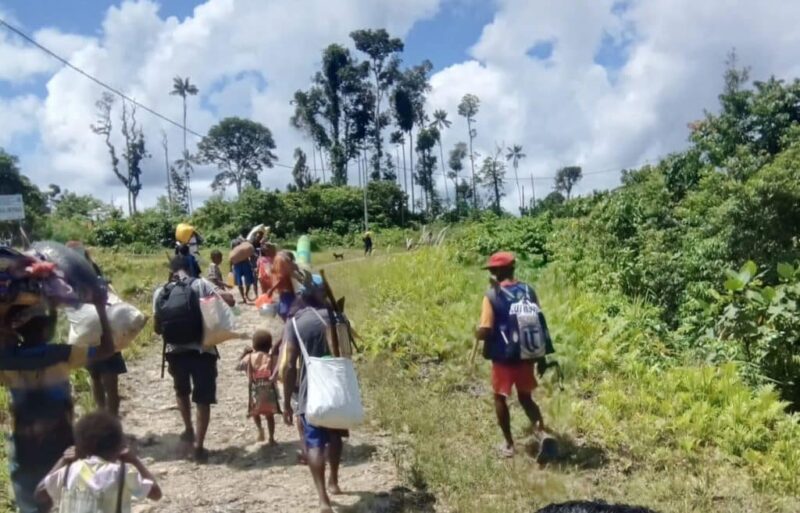 The people of five districts in Maybrat Regency fled to forest to avoid security forces. Courtesy of IST.

Jayapura, Jubi – The chairman of the Lay Apostolic Commission for the Manokwari-Sorong Diocese, Isak Bame, has reported that residents from five districts in Maybrat Regency are fleeing their villages after the attack on the military post in Kisor Village, South Aifat District on September 2, 2021, which led to security forces sweeping villages searching for the culprit.

He further said that it was also difficult for priests and church leaders to reach these displaced people as the bridge to Aisa Village in East Aifat, as well as to Ainesra Village in Far East Aifat had been damaged by unknown people. The bridges in Fuog Village and Sabah Village in South Aifat were also damaged, making it impossible for vehicles to pass.

“It is just sad that the activities of the people have been hampered [due to armed conflict]. We are still accommodating some residents who fled near the St. Andreas Parish in Ayata [Middle East Aifat],” said Bame.

Bame said more security personnel were deployed to Maybrat. They were seen building checkpoints in Kisor and Sesemuk. Security forces were also seen increasing in numbers in Ayamaru District.

“We hope that the TNI and police do not act [recklessly] against the civilians on the run or those in villages,” he said.

Head of the West Papua National Committee (KNPB) of Maybrat Yohanes Assem confirmed the information on displaced people from five districts in Maybrat. “That’s right, the civilians are evacuating. But we don’t know how many people have fled due to our distance and they fled in a state of panic. So we can’t say for sure yet,” he said.

Human rights lawyer Veronica Koman also tweeted on Monday about the latest situation in Maybrat. “A new wave of displacement of thousands of people from 19 villages in Maybrat, West Papua. They are running away from raids by Indonesian security forces following the killings of four soldiers by the West Papua National Liberation Army last week,” Koman said.

A new wave of displacement of thousands of people from 19 villages in Maybrat, West Papua.

They are running away from raids by Indonesian security forces following the killings of four soldiers by the West Papua National Liberation Army last week. pic.twitter.com/L7D7qTGD1N

Previously, lawyer Yan Christian Warinussy Maikel said the military had wrongfully arrested two civilians, Maikel Yaam (17) and Simon Waymbewer (26), for allegedly being involved in the attack on Kisor Military Post. Warinussy said that according to a report received by his party, the two were not part of an armed group. He urged the military commander to release Yaam and Waymbewer.