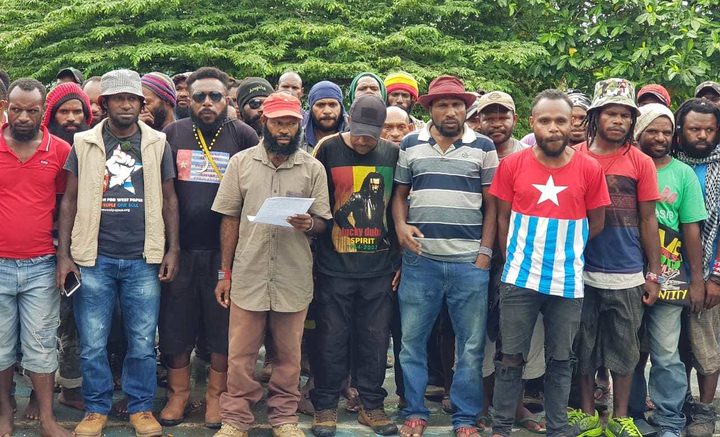 Papua, Jubi – There’s strong opposition in West Papua to a reconfiguration of military forces in the struggle for independence from Indonesia.

The ULMWP last week said the Army was a united front between the West Papua Liberation Army, or TPNPB, and two smaller fighting forces.

Representatives of the TPNPB, and the broader Free Papua Movement, have since claimed they do not support thie unification anounced in the ‘Vanimo Border Declaration’.

This has been echoed by the West Papua National Committee, or KNPB, a pro-independence organisation focussed on peaceful campaigning.

Its international spokesman Victor Yeimo spoke to Johnny Blades about their concerns.

Victor Yeimo: We still struggle for independence, for our liberation. We need a liberation army. As you know, historically, this organisation (TPNPB) exist since 1961 and until today they exist, fighting on the ground. And the two other ones (the West Papuan National Army and the West Papua Revolutionary Army) separated from TPNPB. But in reality as West Papuans know, as well as colonial (power) knows, these two organisations never have an action on the ground. It’s not a competition between one organisation and another organisation, but in the unity, to liberate the West Papuan demand for self-determination, to go for our goal of freedom, we need one military organisation only. We don’t need many organisations. It wil make confusion in west Papua people. and it will make it difficult for us to make a solution; And it’s very dangerous for the guerillas and all the soldiers of the West Papua army on the ground because if there are three commands, three shystems going on in the ground, it will be difficult, because it will create problems within our military, and it will confuse. How can we attack the enemy through three systems of military organisations? In the revolution history, as you know, we need only one organisation of military.

Johnny Blades: But isn’t that what the ULMWP is trying to achieve, that they are all uniting?

Victor Yeimo: There are concerns in the constitution of the OPM (Free Papua Movement). As you know on the 1st of July 1971 when OPM declared proclamation of independence of the republic of West Papua, they have their own constitution. And this military, TPNPB, is under the constitution of the proclamation. Yes, it is important for us to unite, but in a military… they (West Papuan National Army and the West Papua Revolutionary Army) already split from the main organisation, the TPNPB. So I think now, in reality, the people of West Papua, we want to be free. So please if you want to unite, don’t degradate the existing organisation, the TPNPB, because today as you know on the ground TPNPB is still fighting with arms on the ground.

Victor Yeimo: Yes, the military has its own discipline of military. The constitution is something that we can discuss and unite. But the military is a tool for revolution. We need only one military and one discipline. So if they (the West Papuan National Army and the West Papua Revolutionary Army) if they have their own discipline of military, please bring it to the TPNPB. we have to strengthen the exist one. So then, what we want… we have one goal. So please use the existing one as our strength to attack the enemy. That’s the solution for KNPB. We are supporting the ULMWP but we encourage them to only recognise the TPNPB as the one and only military defence.

Johnny Blades: There’s been some criticism from people in the OPM, or TPNPB, about the way this (declaration) has been done. What do you think about the reaction?

Victor Yeimo: Yes, in the ground the reaction is negative. The other headquarters of each commander, like in Lanny Jaya, also in Puncak Jaya, also in Paniai, also in Yahukimo, also in Nduga, they are not involved in this declaration. So I believe that they are opposed to that declaration.

Johnny Blades: The KNPB has generally been a peaceful organisation. What do you believe in, does the military have a role in the struggle?

Victor Yeimo: Yes we support them in resistance as a defence force, as they have the same aim: to go for self-determination. But we have a different method. We organise people in West Papua through the peaceful means (including civil resistance and demonstrations). Until today KNPB believe in peaceful means. We don’t even hope the military action will give more influence inside our struggle because today people around the world, the solidarity just becomes bigger and bigger because our peaceful action in the ground. But it will not stop them fighting, because this is the reality in every struggle, a liberation army. We want our own military. It’s something that always happens in every struggle. So we want them to fight in accordance to their method.

Johnny Blades: The political leadership of the struggle, is it accurate to say that (ULMWP chairman) Benny Wenda is the head of that movement?

Victor Yeimo: I say that ULMWP should become co-ordinating body, not become a state or acting like a state. because we have too many factions and too many history. So we want today the organisations can unite all of the factions, all of the movements in West Papua through the co-ordination mechanism… like three years ago (at ULMWP’s inception). This is something important. We will have our own nation state after independence. So what we want today is to unite, co-ordinating the agenda and organisation, everything we can discuss. So, it’s not like now, everything comes from outside, from Benny Wenda, from outside. It’s not good for the unity. It will kill the unity because in our history there are too many people claiming they are the president, who claimed they have their own constitution and everything. We don’t want that. What we want today is freedom from Indonesian occupation. (*)