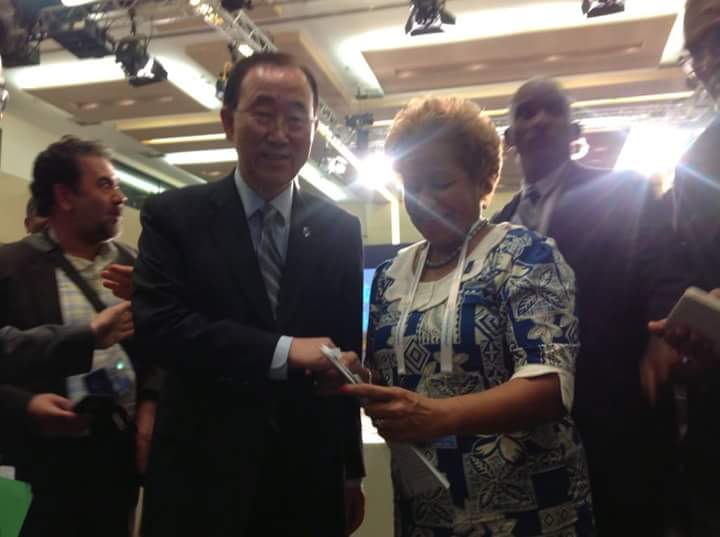 Jayapura, Jubi – There was an historic moment for West Papua at the World Humanitarians Summit in Istanbul, Turkey yesterday as UN Secretary General, Ban Ki Moon was presented with the West Papua Fact Finding Mission Report titled “We Will Lose Everything” by Emele Duituturaga, the executive director of PIANGO (Pacific Islands Association of Non-Governmental Organisations).

Duituturaga presented the report to Ban Ki Moon during day two of the World Humanitarian Summit in Istanbul, Turkey. The report was received by the assistant Secretary General.

Duituturaga who captured the handing over in a photograph said she was privileged to have had a brief exchange with Ban at the end of the summit.

“PIANGO strongly advocates human-rights based approaches and we commit to upholding norms that safeguard humanity, specifically in relation to speaking out on violations of international humanitarian and human rights laws,” she said.

“In the Pacific, we have our share of conflict induced humanitarian challenges. We applaud the closing of the Manus Refugee camp in Papua New Guinea, we are concerned about the conflicts at the Nauru detention centre and we call for UN intervention for human rights violations in West Papua.”

“As a leading civil society organisation, the Pacific Islands Association for Non-Governmental Organisations (PIANGO), representing NGOs in 21 Pacific Islands Countries and Territories, is committed to this Agenda for Humanity.”

“In the Pacific where 80% of our population are rural based, the first and the last response is always the local response and so we need to reinforce local leadership, strengthen community resilience and reprioritise localisation of aid.”

She said while governments remain the driver at the national level, community engagement is the lever.

“PIANGO is committed to facilitate effective coordination of local and national civil society organisations with the complimentary role of international NGOs.”

“We also expect our leaders to match the ambition of this agenda with national and regional strategies and accountability mechanisms for inclusive and participatory implementation, bringing all stakeholders together and at all levels – to include government, civil society, private sector, academics, parliamentarians, local authorities, faith communities and UN agencies.”

The summit which had 9000 participants from 173 states, including 55 heads of state, hundreds of private sector representatives and thousands of people from civil society and non-governmental organisations ended Wednesday. (*)

US Ambassador’s Visit to Papua Should Contribute to Conflict Resolution

New Declaration for The Future of West Papua Signed in London