‘We’ll not be safe with Indonesia,’ says Benny Wenda 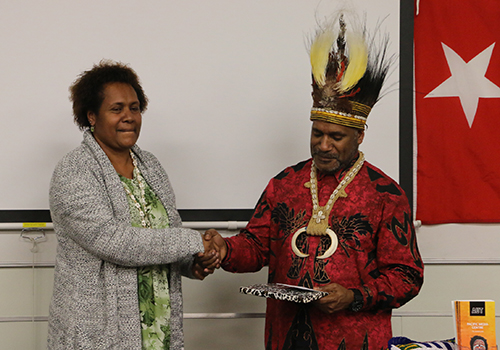 Jayapura, Jubi – Benny Wenda, a tribal chief of West Papua exiled to the United Kingdom by Indonesia, told Asia Pacific Report last week during his tour in New Zealand, that time was running out for West Papua if governments such as New Zealand do not act.

He said the purpose of his visit to New Zealand was to highlight the importance of West Papua returning to its Melanesian family.

“We really need Pacific Islanders, our sisters and brothers across the Pacific – particularly New Zealand and Australia – to bring West Papua back to its Pacific family. Then we can survive. Otherwise, it will be very difficult to survive with Indonesia,” he said.

Wenda is calling for the New Zealand government’s integral commitment to the campaign for a free West Papua.

He said this was because New Zealand had a duty, as a part of the Pacific, to raise awareness of the atrocities in West Papua.

“West Papua is a very close neighbour, so that’s why I hope the New Zealand government will speak more about the human rights situation in West Papua.”

Wenda said it was high time for New Zealand to pull away from its business, trade and investment focus with Indonesia and speak about Indonesia’s human rights abuses.

New Zealand “needs to do more” as a country, he said, because New Zealand is a country which is meant to value human rights, respect the rule of law, freedom of speech and the right to self-determination in other parts of the world.

“They are insistent – the New Zealand government – that West Papua is part of the territorial integrity of Indonesia, so we can’t get past that critical issue.”

She said she therefore did not have much faith in the current government to step up and was looking for future leadership, such as through the Labour-Greens alliance, to move the campaign for West Papuan self-determination forward on the home front.

“I really do think we need a different government that actually has some fundamental commitment to human rights over and above trade and being part of the US military complex around the world. We have to have change to get change. It’s not going to happen through these guys.”

In her eight years in Parliament, Delahunty said the situation in West Papua was the toughest she had had to face.

‘Everything swept under the carpet’

Wenda said there was deep-seated inaction on Indonesia’s part because of its prejudice in prosecuting people who have attacked and tortured and beaten both West Papuans and also West Papuan journalists.

“Indonesia is getting away with impunity. Nobody is brought to justice. Everything is swept under the carpet.”

Delahunty reflected, however, that the world was seeing the lack of free and frank reporting play out in West Papua.

Wenda called to an audience gathered at his talk at the Pacific Media Centre-hosted Auckland University of Technology on Tuesday evening. “I really believe there are some very, very brave young people, including journalists, who are committed to this issue and I guess it’s that thing: if you have a voice, use it.”

Wenda highlighted a “united” Pacific was key in raising awareness of the “Melanesian genocide” occurring in West Papua.

Wenda and Delahunty both closed their interviews with a clear message for Indonesia: “Start talking, start listening, and stop thinking that you can ever brow beat people into the dust because you want their resources because in the end, the human spirit doesn’t work like that and these people will never give up. It’s up to us to support them.”

This is written by Kendall Hutt, contributing editor of Pacific Media Watch.

Merauke to Export Rice to PNG