‘We are racing against time’: Govt excuses for food estate threatening environment and Papuan forests (Part 1) 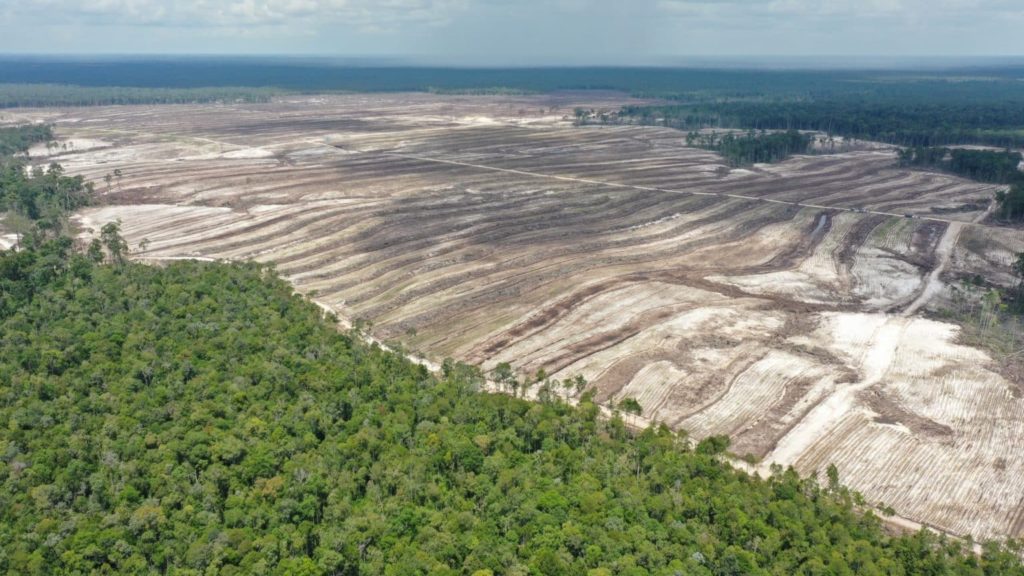 Until August 2021, the Ministry of Defence has cleared hundreds of acres rain forests in Gunung Mas Regency, Central Kalimantan. Photo By Tempo/Save Our Borneo.

The government claimed that the plan would not harm the environment. In fact, they claimed that by boosting crop yields while encouraging modern, environmentally-friendly agricultural practices, the country would dodge the food crisis.

However, in just five months, the Ministry of Defense, oddly the ministry appointed by President Joko “Jokowi” Widodo to lead the program, has cleared the orangutan habitat in Borneo (Kalimantan) and turned it into a giant plantation.

The story behind the plantation clearing reveals how the Ministry of Defense took advantage of a set of regulations hastily drafted during the pandemic, stripping away environmental protection principles to open up vast new lands for food plantations.

An investigation by The Gecko Project, Tempo, and Jubi found that the ministry moved so quickly that it failed to comply with the rules, potentially clearing hundreds of hectares of forest illegally.

The plantation in Central Kalimantan will use 32,000 hectares of land, almost entirely of which is a rain forest. And this is only a small part of the ministry’s ambitions.

Defense Minister Prabowo Subianto planned to plant cassava on more than one million hectares of land in various parts of Indonesia.

The investigation also found evidence that the ministry was trying to direct the tens-of-trillions worth food estate program to a company without a clear track record in plantation, namely PT Agro Industri Nasional (Agrinas).

Agrinas is owned by a non-profit foundation run by Prabowo with the support of a line of retired and senior military officers.

Experts question the legality of the ownership structure because it appears to violate rules meant to ensure that the foundation actually serves a charitable purpose. They also said that Prabowo’s close relationship with the executives of Agrinas and its commissioners gave rise to a serious conflict of interest.

Our investigation also reveals that the Ministry of Defense is planning to develop a food estate in Papua, a center of biodiversity in eastern Indonesia. Currently, Papua holds the largest intact rainforest reserves in Asia.

The ministry’s efforts to open plantations in Papua were led by a retired Navy officer. According to him, his party would recruit Papuan youths as members of the Reserve Component, to supply the workforce needs in food plantations. Meanwhile, soldiers have been deployed to secure the food estate in Borneo.

The involvement of the military in Papua has drawn criticism. The military has a record of human rights violations against Indigenous Papuans to expedite the exploitation of natural resources for mining and plantation projects.

The Ministry of Defense has announced plans to grow rice and cassava on thousands of hectares of forest land and customary land in Merauke, a military-turbulent area in Indonesia’s far east.

However, they did not talk about the plan with local residents who would be severely affected. Papuans, whose rights have been violated by the new set of regulations, are still in the dark.

‘We are racing against time’ 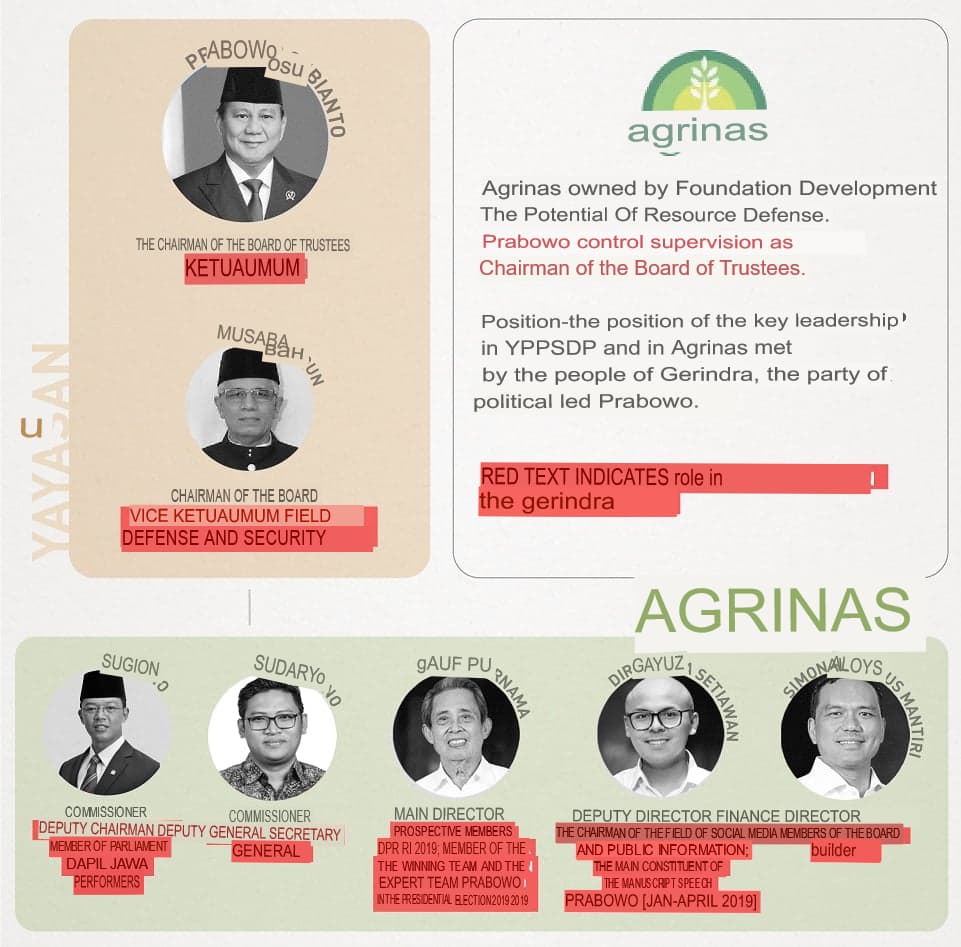 Jokowi launched the food estate program amid the alarming global food crisis due to the COVID-19 pandemic. The coronavirus outbreak could be a catastrophe for the millions of people around the world living on the brink of starvation, said the World Food Programme’s Chief Economist.

The UN organization says the problem is not a lack of food production. The real threat is when food cannot reach the people because of stagnating supply chains due to regional restrictions and many workers being forced to stay at home during the pandemic. As a result, many families in Indonesia may find it difficult to afford food due to the economic slowdown.

On the other hand, the political elite has always had the ambition to reduce Indonesia’s dependence on food imports by increasing domestic production.

Such an issue has emerged as a topic of debate in the last two presidential elections. Jokowi, who has served for two terms, ordered his ministers to realize that ambition, while at the same time countering the threat of a food crisis caused by the pandemic. The method is by boosting the production of staple foods such as rice through the opening of giant food plantations.

The licensing process for opening plantations in Indonesia is complex and lengthy. Companies must first obtain approval from various government agencies, negotiate with local residents, and conduct an environmental impact analysis (AMDAL). Large areas of land and forest should not be converted for agriculture or plantations because they protect watersheds and preserve forest cover.

But officials in Jakarta drafted a series of regulations to cut the bureaucracy. Once the new regulations emerged, experts considered the government was prioritizing shortcuts rather than enforcing legal principles and protecting the environment.

Adrianus Eryan, a legal researcher at the Indonesian Center for Environmental Law (ICEL), suspected the “National Food Estate Economic Recovery Operational Plan” document which he found online in mid-2020. The document issued by the Ministry of Environment and Forestry explains the government’s plan to convert millions of hectares of forest land in four provinces into “food land”.

According to Eryan, such documents showing technical guidance are normally issued after the legal framework has been ratified. The land conversion plan as described in the document does not have a clear legal basis.

“It’s a bit weird because it’s the reverse,” he said.

The first regulation on food estates published in October 2020 paves the way for potential land conversion. It gives the government the authority to convert millions of hectares of land that previously could not be used for food plantations, including protected forest areas.

The regulation allows the government to have an unbalanced authority and expedite the transfer of land functions with minimal supervision. There are indeed a number of requirements that must be met in acquiring land including documents of a management plan and environmental permit. But almost all of these documents can be made after land acquisition.

Land conversion for food estate only requires a “commitment” to complete these documents. The main requirement is a Strategic Environmental Study (KLHS). The study usually contains in-depth analysis, including results of public consultations, which are used as recommendations for long-term planning.

However, the new regulation allows for a “quick” KLHS in urgent circumstances. According to ICEL’s analysis, the quick study relies only on expert judgment rather than empirical evidence. ICEL found that the study “tends to be speculative and leaves a lot of room for uncertainty.” They also questioned why the government chose this instrument for the food estate program.

The Indonesian Forum for Environment (Walhi) considers the quick KLHS to have no legal basis. They urged the Ministry of Environment and Forestry to revoke the regulation allowing a quick KLHS.

In July 2021, the regulation was updated but the changes were not substantial. Yeka Hendra Fatika, a member of the Ombudsman of the Republic of Indonesia, said that even a year after the food estate program was announced, it was still unclear who would be implementing it and how the financing scheme would be.

“Without standard planning, the project is vulnerable to “potential maladministration”, Fatika added.

Two months after the first food estate regulation was issued, fears of a global food crisis have eased, according to a World Bank analysis published in December 2020. Many countries have returned to exporting agricultural products. Staple foods trade is also expected to increase again for the first time in the last four years.

According to the World Bank, the problem faced by poor families in Indonesia is the high price of food as a result of processing and transportation costs. It is also difficult for poor people in Indonesia to obtain nutritious food such as vegetables and fruits. The food estate program, whose main target is rice and cassava production, will not be able to address these two problems directly.

In its analysis, the World Bank warns that one of the keys to a food estate’s success is “management of environmental and social risks”. However, the Indonesian government instead disarms the principles of social and environmental protection.

In September, Presidential Chief of Staff Moeldoko told us in an interview that the issuance of a food estate regulation was legitimate because it was based on an urgent situation, namely the threat of a “food crisis”. “We are racing against time,” he said. “If we’re determined to serve the community, then the safety of the people is the priority.” (*)