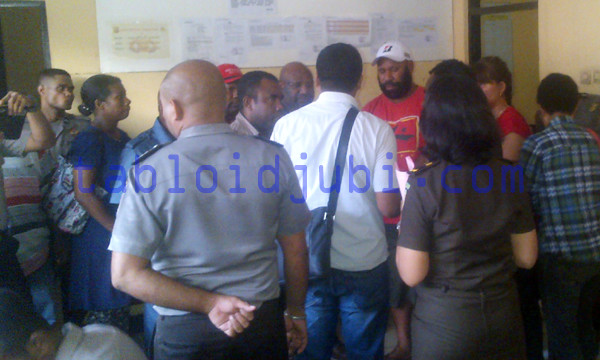 Jayapura, Jubi – The Wamena chief prosecutor has released on bail two suspects in the Tolikara incident that took place on 17 July 2015.

The release of JW and AK, who are kept in the custody of Papua Police, was announced on Wednesday (23/9/2015) at around 17:00 Papua time and attended by the suspects’ lawyer Gustaf Kawer, President of GIDI Dorman Wandikbo, Wamena chief prosecutor Nurcahyo, Papua Police representative and the families of both suspects.

Gustaf Kawer said the suspects were released due to several considerations, including the meeting of Regional Heads Communication Forum of Papua Province held in Papua Police Headquarters earlier this week.
“It’s to suspend their detention, but the legal process is still continuing. It’s applied due to several considerations, including the community peace agreement in Tolikara to stop the conflict. Now the situation in Tolikara is conducive, so this suspension could make the situation getting better,” said Gustaf Kawer.

In the same place, Wamena State Attorney Chief, Nurcahyo, said Wamena State Attorney Office approved this suspension based on the guarantee provided by several parties.
“There are guarantee from many parties. Several days ago, their lawyer sent us a written request of suspension and enclosed several documents, including the letters of guarantee from their families, religious and community leaders,” Nurcahyo said.

In addition, he said, their lawyers also attached the result of reconciliation meeting and peace agreement between both parties, the statement of victims of various ethnics including Toraja, Java and local community, as well as the letter from Forkopimda Province Papua signed by Papua Governor, Papua Police Chief, Papua People’s Assembly, Papua Legislative Council and other parties.
“However, the legal process is not terminated. It’s only to transfer the status of police’s detention to city’s detention. They are not allowed to go out from Tolikara. This suspension has another consideration. It is applied until 7 October, and need to extend after that,” he said. (Arjuna Pademme/rom)

Tolikara Incident : One Killed and 11 Wounded

Local Leaders Urged Not to Remain Silent About Violence