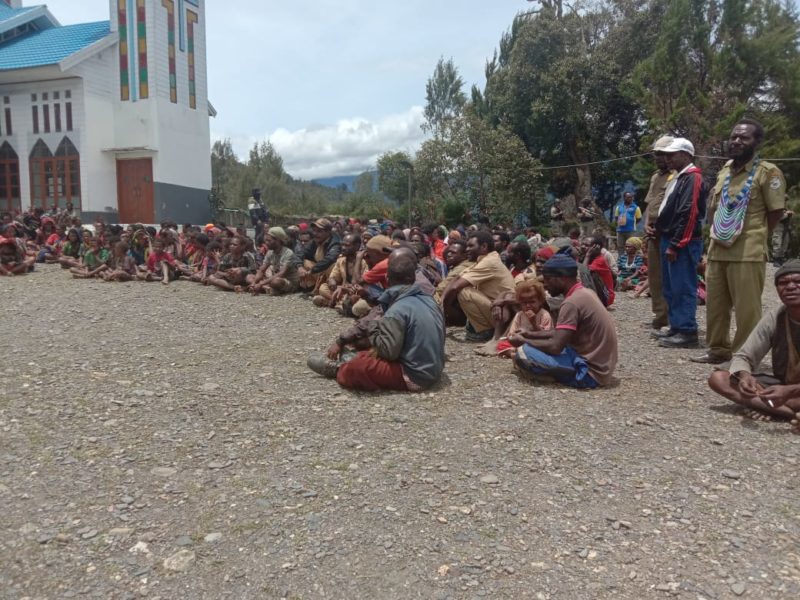 Residents of Intan Jaya who fled to the courtyard of the Catholic Church of St. Misael in Bilogai, Sugapa, Intan Jaya. - IST

Jayapura, Jubi – The moderator of the Papuan Church Council (WPCC), Rev. Benny Giay, said the Church has a key role in advocating various issues in the Papuan conflict. According to him, the Synod of the Kingmi Church in the Papua Land was once co-opted by the Indonesian government in 1964.

“In 1964, the GKI Church, Kingmi Papua, and the Catholic Church signed a joint declaration of support and handed it over to President Soekarno,” he said. Giay said that at that time, the Church in Papua saw Indonesia as a servant of God who would prosper the people, and that was imprinted in the minds of the pastors. “Papua Kingmi Church in particular. But I don’t know about the GKI Church and other church denominations,” he said.

Giay said that from mid-April to July 1964, church leaders and leaders of the synod in Papua were brought to Bogor, where they were indoctrinated for one month. “After that, they made a statement that the Church supported Indonesia occupying the Land of Papua. This affects the role of the Church in dealing with Papuans at that time, now, and in the future,” he said.

He explained that the violation of human rights or the humanitarian tragedy from 1977 to 1978 became a moment of revival for the Indigenous Papuans. “Gradually, the younger generation emerged and rose against [the human rights violations] since 1977. There were various movements, such as the Mambesak music group, student group, women’s group, academic group—that is what disturbs [the old point of view]. At last, the Church felt that such a government was no longer a servant of God,” said Giay.

Various church denominations have seen the suffering of their congregations in Papua, therefore, the Church established various church organizations and NGOs to advocate for human rights issues in Papua.

“Our awareness has prompted us to participate in establishing the Papua Branch of the Institute for Human Rights Studies and Advocacy, or Elsham Papua, the Commission for Missing Persons and Victims of Violence (KontraS) Papua, the Papua Legal Aid Institute or LBH Papua, and so on. The Synod of the Kingmi Church in Papua Land was also involved in establishing NGOs because one of the Kingmi priests was murdered in 1984,” said Giay.

Various organizations and NGOs advocating human rights violations led by the Church have a long history of working in raising the issue of the Papuan conflict. Unfortunately, according to Giay, the conflict in Papua has not been resolved and escalated instead.

“We see that the problems are getting more serious and that is very concerning. NGOs and the Church try to deal with the conflict in Papua but the Church also has limited human resources to collect reports of human rights violations,” said Giay.

The Papuan Church Council, which consists of the leaders of the Synod of Churches in Papua, meets once every two months to discuss various issues related to the Papuan people who have been affected by the armed conflict, as well as the human rights violations that have occurred. “And we put out a report through the Voice of the Shepherd,” Giay said.

According to Giay, the prolonged conflict in Papua was because the State just let it happen. “Conflicts in Papua are often used as projects by the State,” he said.

Giay further called on the security forces to stop the practice of selling their weapons and ammunition to the TPNPB or OPM. “Soldiers who break the law must be punished. [The government] talks about eliminating the OPM and the armed group, [but] these statements are interpreted differently on the ground. If so, who is deceiving whom? Indonesia is two-faced,” he said.

Giay said that, when a military post was attacked, it has always been said that armed groups attacked them. But the truth is, members of the TNI and police have actually been involved in selling weapons to armed groups in Papua.

“Buying and selling weapons among soldiers is very well known in Papua. I have conveyed this to President Joko Widodo (Jokowi) but no statement has been made by Jokowi until now,” he said.

Although several members of the TNI and police have been arrested and tried for selling weapons and ammunition to armed groups in Papua, Giay believes that the government has not shown any real efforts to stop the arms trade. Giay views that this is a form of government omission, and it is like pushing new “firewood” to keep the fires of the Papua conflict burning.

“I once told the President that he could form an independent team to investigate which networks or [persons] within the security forces [which] created the business of weapons in Papua,” he said.

Researcher for the Regional Research Center (P2W) of the Indonesian Institute of Sciences (LIPI) Cahyo Pamungkas said the government’s efforts to resolve the Papuan conflict failed because they did not solve the roots of problems. Pamungkas was worried because anti-Indonesian sentiments grew even wider among the younger generation of Papua due to the government’s failure.

“The government is like an ostrich, which, in case of danger hides its head on the ground. This means that the government comes up with a solution that does not solve the problem,” he said.

Pamungkas said the Indonesian government tried to resolve the Papua conflict by building infrastructure and expanding territorial authority, through the second Otsus and deployment of troops to Papua. “The government wants to resolve the conflict but not the problem. The problem remains, and that is worrying because it continuously reinforces anti-Indonesian sentiments [in Papua],” he said.

Pamungkas reminded, if anti-Indonesian sentiments were allowed to continue to grow, then the will of the Papuan people for independence would also increase, as well as Papuan people’s disappointment with the state.

“The consequence is the desire for independence. Although it is not expressed openly, in the hearts of Papuans they want to be free because in Indonesia there is no freedom of expression, no chance to live a better life,” he said.

He stated that the sentiment that the Indonesian government was a colonial government had actually existed. It was stronger in the hearts of victims and families of victims of human rights violations, such as Benny Wenda, Egianus Kogoya, and others. Their families were victims of violence and human rights violations in the past. These people carried the generational trauma, which prompted them to make movements to fight for Papuan independence.

“Many of their families were killed in the military operations in the central mountains area in 1977-1978. The current Papua political leaders, they were the victims of a military operation that took away their childhood,” said Pamungkas.

He said that the Papuan conflict could only be reconciled if the aspirations for an independent Papua were placed within the framework of Indonesia, by opening up a dialogue. “What the Papuans are asking is the recognition of Papua’s human dignity, the right to life. Those are the aspirations of the Indigenous Papuans, which are not fulfilled by Indonesia,” he said.

He further reminded that labeling armed groups in Papua as terrorists and adding territorial commands, such as the Military District Command and the Military Resort Command, would not solve the problems in Papua, only added to the problems.

“The security approach has resulted in injuries, fatalities, and trauma to survivors who have not yet been healed. Their children and grandchildren will join the independence movement. Indonesia has, directly and indirectly, helped to raise the OPM by deploying military operations, which actually turned civilians victims,” he said.

On the other hand, the security forces claimed that they had changed the approach they used to resolve the conflict in Papua. Papua Police chief Insp. Gen. Mathius D Fakhiri, for one, said that during his tenure the police took a humanist approach to the Papuan people.

“I, as the regional police chief, see the people in the Land of Papua as Indonesian citizens who must be served by the police. I’ve never seen the Papuan people any other way,” he said.

Fakhiri said the humanist approach would be continued. “We are taking steps forward in handling Papua. I ask the front guard at the Papua Police to carry out active communication with all parties, traditional leaders, and community leaders so that those who are on the opposite side return to unite in the Unitary State of the Republic of Indonesia,” he said.

Fakhiri also believes that the government’s efforts to accelerate development in Papua will be accepted by the community as an act of service.

In line with the government’s efforts, the National Police continue to try to reduce tensions between the warring parties. “We, the police officers, are reducing steps that are detrimental to government policies. We try to be more patient and open up to optimize the dialogue approach, as well as the welfare approach. We are in active communication so that all elements of society—whether they are affected or those who are still in the forest—can get out and rebuild their village,” said Fakhiri. (*)