Jubi TV – The Indonesian government should immediately stop plans to mine the Wabu Block in Papua due to the risk of escalating conflict and violating the rights of Indigenous Papuans, Amnesty International said in its latest report released on Monday, March 21, 2022.

The Intan Jaya Regency, where the Wabu Block gold reserves are located, has been the center of conflict between Indonesian security forces and pro-independence Papuan groups in recent years.

Amnesty International recorded an alarming increase in security forces in the area since 2019, with 12 cases of alleged extrajudicial killings involving security forces, and how Indigenous Papuans there had often experienced restrictions on movement, beatings, and arrests.

The people of Intan Jaya told Amnesty International that they are using the proposed mining area to cultivate crops, hunt animals, and collect wood. 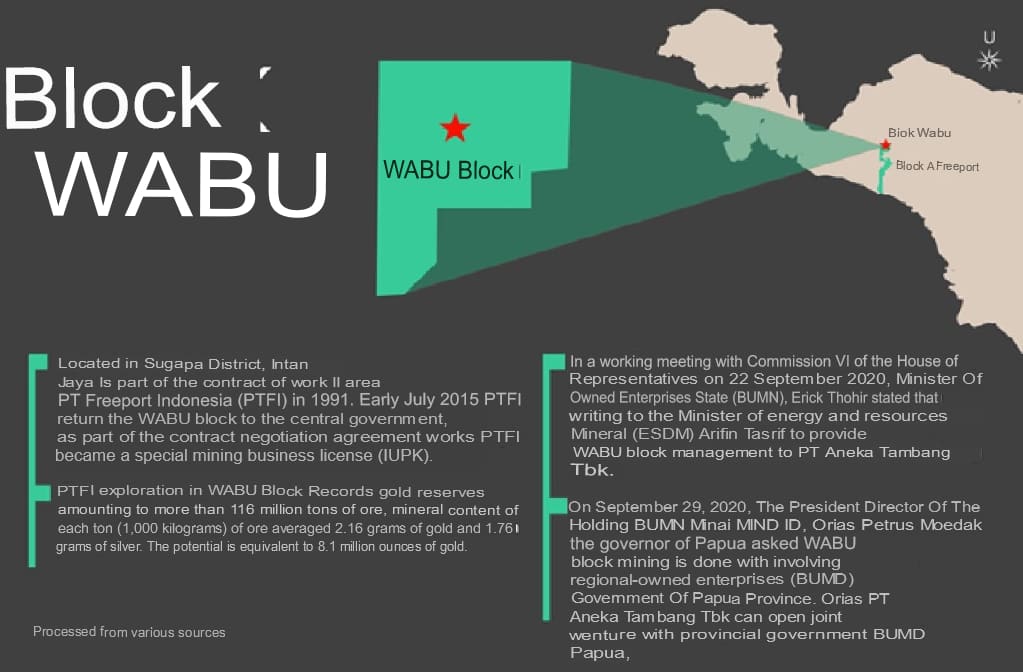 “By ignoring the needs and traditions of Indigenous Papuans, the development of the Wabu Block risks exacerbating the already deteriorating human rights situation,” said Usman Hamid, Executive Director of Amnesty International Indonesia. “People in Intan Jaya live under the fear of increasingly violent security forces who control many aspects of their daily lives. And now their livelihoods are threatened by this ill-prepared project. To put it simply, the Wabu Block could result in disasters”.

From March 2021 to January 2022, Amnesty International conducted remote interviews with 28 people about the situation in Intan Jaya, including residents and local authorities, human rights defenders, and representatives from civil society organizations. They described how armed clashes and human rights violations have increased dramatically over the past two years.

Threats to a way of life

Since February 2020, at least, there was an official plan to develop mining activities in the Wabu Block. Located south of the Sugapa district, the capital of Intan Jaya, the Wabu Block contains approximately 8.1 million ounces of gold, making it one of the five largest gold reserves in Indonesia.

The Wabu Block is currently under review to obtain a license from the Ministry of Energy and Mineral Resources. According to official documents obtained by Amnesty International, the proposed mining area covers 69,118 hectares – approximately the size of Jakarta.

Indigenous Papuans say they are afraid of losing their land and livelihoods and are concerned about the impact of environmental pollution.

“If there is mining, we will not have land for gardening, livestock will not get fresh fruit directly from the forest, and our grandchildren will lose customary lands,” Lian, a Papuan native, told Amnesty International.

In September 2020, a senior Indonesian official stated the government’s intention to allow the state-owned mining company, PT Aneka Tambang Tbk (Antam), to develop mining activities in the Wabu Block. In letters sent to Antam and the Ministry of Energy and Natural Resources in February 2022, Amnesty International described the human rights issues related to the project and asked several questions. Until this article is published, neither the government nor the companies have responded.

“The government has an obligation to obtain informed consent from Indigenous Papuans who may be affected by the mine. But in a climate of violence and intimidation, it is difficult to imagine how such a consultation process could meet international standards,” said Usman Hamid.

“The first step is to ensure whether a full and effective consultation can even be carried out under the current circumstances. Before that happens, Indonesia must press the pause button on mining plans in the Wabu Block,” he added.

The conflict between Papuan pro-independence groups and Indonesian security forces has been going on for decades. But the Intan Jaya Regency emerged as a new point of conflict in Papua after October 2019, when members of the West Papua National Liberation Army (TPNPB) allegedly killed three motorcycle taxi drivers they accused of being spies.

As part of this research, Amnesty International has identified 17 posts occupied by security forces in Sugapa District. According to interviews, only two of the 17 posts existed before October 2019. In fact, the increase in the number of security forces has been accompanied by an increase in unlawful killings, raids, and beatings.

The report by Amnesty International also documents 12 alleged extrajudicial killings involving members of the Indonesian security forces in Intan Jaya in 2020 and 2021.

This amount represents more than a quarter of the total number of unlawful killings allegedly committed by Indonesian security forces in 42 regencies and cities in the provinces of Papua and West Papua recorded by Amnesty International during the same period.

One of the unlawful killings is the case of Apianus and Luter Zanambani, or the Zanambani brothers, whose bodies were burned by security forces after they were detained during a sweep conducted in April 2020 in Sugapa.

Extrajudicial killings suspected of being carried out by security forces are common in Papua but accountability is rare, as Amnesty International documented in its 2018 report ‘Sudah, kasi tinggal dia mati’ (Let them die already).

“Investigating cases like this and holding perpetrators accountable is key to upholding human rights and achieving peace in Papua,” she said.

Amnesty International’s study also reveals that the addition of troops and the escalation of the conflict in Intan Jaya are accompanied by severe restrictions on local residents’ freedom of movement. Residents said they had to seek permission from Indonesian security forces to carry out daily activities such as gardening, shopping, or visiting other villages.

“When we go to the city to shop, we are asked where we are going, which village we live in, where we are from. After shopping, when we are going home, our things are checked. Even our bags had to be checked daily by security forces,” said Lian.

According to an Amnesty source, security forces have also restricted the use of electronic devices such as cell phones and cameras. He also said that Indonesian security forces sometimes detained them because of their haircuts, which the authorities associate with pro-independence armed groups.

“People like us like to have long hair. This is part of our culture, not only in Papua but in Melanesia. I have been asked [by the security forces] more than ten times about my hair and mustache. They caught a lot of people for having long hair and mustaches. They were questioned, beaten,” said Gema, a local resident. (*)