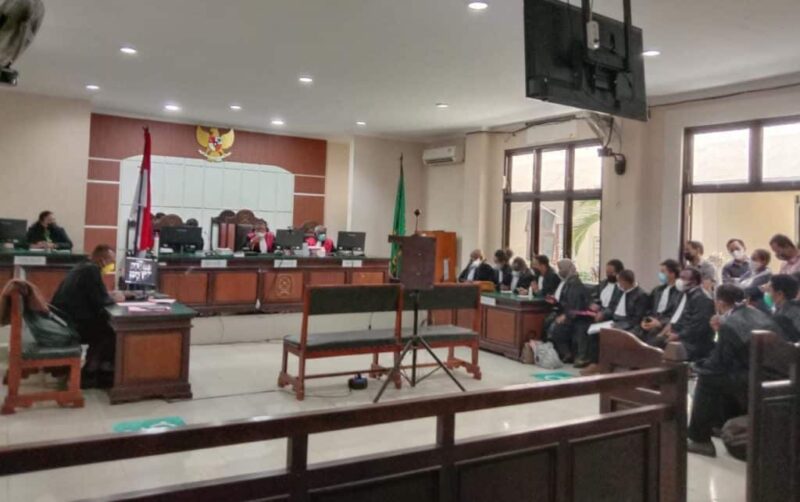 The first trial of Victor Yeimo, the international spokesperson of the West Papua National Committee (KNPB), at the Jayapura District Court on Tuesday (24/8/2021). Yeimo attended the hearing online. Jubi/Theo Kelen.

Jayapura, Jubi – Rights activist Victor Yeimo, who will stand trial for alleged treason, told the panel of judges during his first indictment hearing on Tuesday, August 24, 2021, that he had yet to receive the results of his medical examination on August 10 and 20.

Yeimo said that ever since he had his medical condition checked by doctors from the Jayapura General Hospital on August 10 and 20 to this day, he still did not know the status of his condition, let alone given any prescription or medicine.

“I have not received the results of the examination. I wish to be prescribed medication as part of my health rights. I’ve been checked, but haven’t taken any medicine. I need to take medicine as my body has lost 10 kilograms,“ said Yeimo.

Yeimo’s lawyer Emanuel Gobay said that Yeimo was currently under the High Prosecutor Office’s custody and the public prosecutor had been ignoring Yeimo’s health.

“During the first and second examinations, the prosecutor was absent and did not even communicate with the doctors. It shows irresponsibility while the authority lies with them,” Gobay said.

According to his legal advisory team, Yeimo has a history of lung disease. Regardless, Yeimo is being detained at the Mako Brimob, which detention room is closed, with no sunlight and adequate air circulation. Gobay asked the panel of judges to transfer his client to the Abepura Penitentiary.

“When Yeimo was in the police’s custody, we had asked the police to transfer Yeimo but no response from the chief. Now he is in the prosecutor’s custody and we have requested a transfer as well but to no avail. On behalf of our client, we ask the Honorable [Judge Council] to represent the court to grant our request to transfer [Yeimo’s detention place] from the Mako Brimob to the penitentiary,” he said.

Presiding judge Eddy Soeprayitno ordered the public prosecutor to submit the results of Yeimo’s medical examination to the panel of judges. “The rights of the defendant to remain healthy must be fulfilled, that’s the Assembly’s order. If [Yeimo] really needs the medicine, give it, so that the trial runs smoothly,” he said.

“The results of his medical examination will be submitted to the panel of judges, then to his lawyer,” said Sawaki.

Further, Gobay objected to the agenda for reading the indictment in Tuesday’s trial. He demanded the reading of the indictment be postponed due to Yeimo’s illness.

“It is mandatory for the defendant to follow the trial in good health. Only that way it is ethical for us to continue the trial because the trial will determine the fate of Victor Yeimo,” said Gobay.

The panel of judges granted the objection and adjourned the trial until Thursday, with the agenda of hearing the reading of Victor Yeimo’s indictment by the public prosecutor.

Victor Yeimo was detained by the police for allegedly provoking riots in the antiracism protests in Jayapura City on August 29, 2019. He denies the allegation, however, saying he did not even join the protest on that day.

BARA NKRI on Rally, Market and Supermarket Are Closed