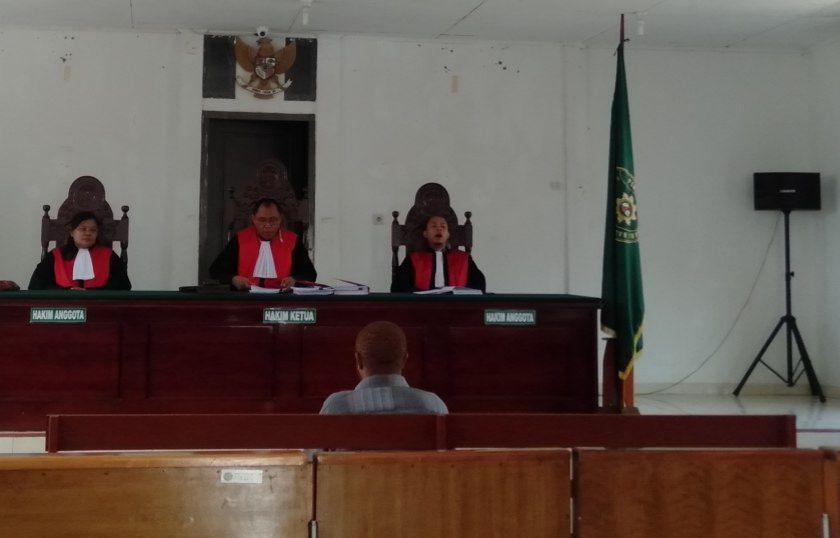 Nabire, Jubi – The panel of judges of the Nabire District Court read the verdict to three defendants of Deiyai’s anti-racism case.

“To the defendants, Stevanus Pigai, Mikael Bukega and Yosias Iyai, who detained since 1 September 2019, the panel decides to give five months and twenty-two days sentence,” said Chair Judge Erents Jannes Ulain when reading the verdict in the Nabire District Court on Friday (6/3/2020).

The verdict refers to Article  160 in conjunction with Article 55 of the Criminal Code.

He further continues that the defendants will immediately free due to their detention period. “We give a chance to the public prosecutor to challenge this decision within seven days, starting today, if he objects it,” he said.

Meanwhile, the defendants’ lawyer Emanual Gobai said they are disappointed with the verdict because it is not consistent with the time of the incident, 28 August 2019.

Gobay asserted that the judges’ argument in elaborating the element of incitement in the case referring to the fact of 26 August 2019, while the incident underlying the case occurred on 28 August 2019.

According to him, the fact was in line with the testimony of the expert proposed by the public prosecutor in the trial, who said if one of the criminal elements accused against the defendants could not be proven, therefore the article charged was also not confirmed.

“We also appreciate that the panel of judges for admitting the casualties and injured victims among civilians in this case, including the defendants,” he said.

Furthermore, regarding five months and twenty-two days sentence, he asserted that the judges gave the verdict adjusting the defendants’ detention period. So, they are immediately be released.

“In regards to further legal step on this decision, the legal counsel, defendants and their families will still discuss further,” he said. (*)