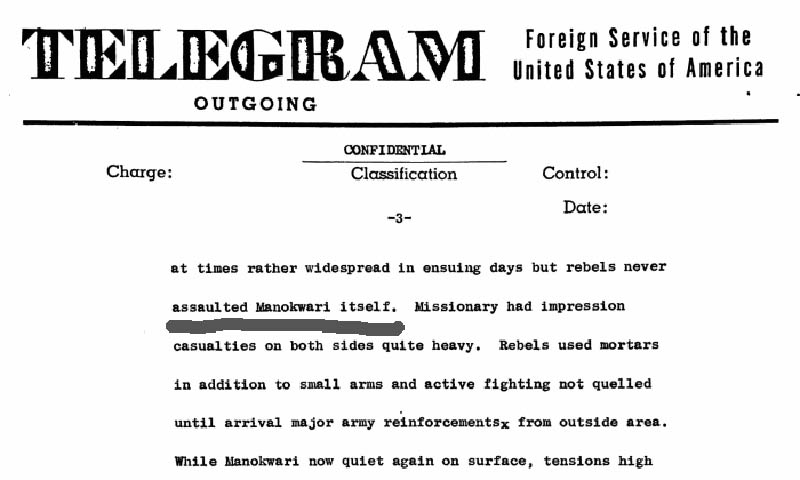 Telegram Illustration of the 1965 US Embassy in Indonesia which has opened to the public - Doc. US National Archives

Telegram Illustration of the 1965 US Embassy in Indonesia which has opened to the public – Doc. US National Archives

Jayapura, Jubi – A number of American diplomatic cable documents related to Indonesia, especially the 1965 tragedy reopened to the public by three American institutions. The documents uncovered telegrams from and to the United States in relation to the mass killings after 1965.

One of the many telegram documents reveals the shooting of innocent Indonesians carried out by the Indonesian army from June to July 1965.

The brutal story in Arfai

There are 39 documents of 30,000 pages which is the record of the United States Embassy (US) for Indonesia since 1964 until 1968. From number of documents, one document was revealed on the shooting of many Orang Asli Papua (Papuan indigenous) in Manokwari in 1965.

The 542A controlled telegram document dated September 15, 1965 revolves around the conditions in West Irian (West Papua) in mid-September 1965, as narrated by a Dutch Protestant missionary who reported about the imprisonment of a missionary, Harold Lovestrand.

The telegram mentioned in June that the Indonesian security forces had prevented some Papuans planning to leave Papua to Australia with a document signed by some of the most prominent Papuans of the time in Manokwari. This incident was followed by the arrest of most civil servants and a number of regional functionaries.

Telegram signed by the US Ambassador to Indonesia Marshall Green, described the first action of Indonesian army in Manokwari is said to be brutal. On 26 June on a hill in Manokwari three Indonesian soldiers were raising a red and white flag, shot by a group of Papuans who rebelled at the time. This event came to be known as an attack on Arfai Headquarters by Permenas Ferry Awom.

Yunus Inauri, one of the perpetrators of the Arfai headquarters attack, in an interview with Jubi few years ago, said that Permenas Awom is a former member of the Papuan Battalion. He was commander of Papua PVK in the Dutch era. He and his friends rebelled because Indonesian troops who came to Papua have made discomfort for the community.

Inauri who was a teacher at the time, said that if Indonesian soldiers find Papuan people on the street who are considered to behave strangely, then they will play at them arbitrarily, including students at school. Permenas who see the situation felt that it was not right; with his friends he beat the Indonesian soldiers who make a mess. But it was said the firefight was inevitable. The situation was so crowded, people run scattered. Permenas by then had a weapon that always carried everywhere.

After the shooting of three Indonesian soldiers, the next day the Indonesian army fired on every visible Papuans and many innocent people were shot in the streets. The shooting action expanded in the days that followed, but Awom’s group never came down to attack Manokwari.

Awom group resistance continued until the main Indonesian troops were brought in from outside Manokwari. In this mass of resistance, incessantly circulated the issue that if Papua is independent, then the Netherlands, Australia and the United States will help fund Papua’s development.

Lovestrand himself, in the telegram is called arrested for fear of being a victim of shootings. For in that period, Papuans who wanted independence filled the streets, as did the Indonesian security apparatus.

In addition to Lovestrand, a Dutch Catholic priest named Vandenberg in Sukarnopura (the name of Jayapura at the time) was also detained for no apparent reason.

The conversation resulted did not last until February 9, where Ambassador Green found that Indonesian Attorney General received a signed confession from Lovestrand stating that he did not report evidence of a rebellion in Papua.

Other parties continue to urge Sukarno to free Lovestrand. The embassy realized that the ongoing pressure on Sukarno created more problems than progress. Finally, on March 18, the Indonesian Embassy indicated by telegram to Rusk that the Indonesian Attorney General began processing documents to deport Lovestrand.

The Dutch missionary was eventually deported with his family using KLM airplanes on March 23, 1966. Harold Lovestrand later wrote about his experience in Indonesia in the book Hostage in Jakarta, published by Moody Press in 1967. (Victor Mambor/Zely)

People not be provoked with rumours on Freeport’s operating area

MSG Chair has Officially Received the Membership Application from ULMWP

Lukas Enembe: KNPB is better than FPI on democracy