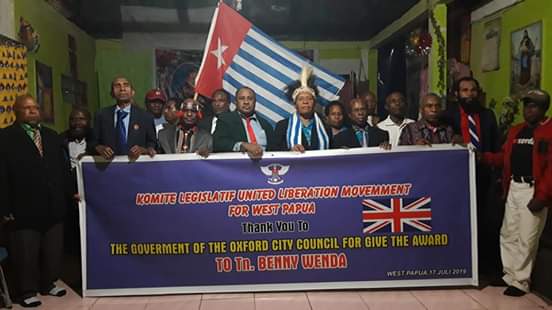 Jayapura, Jubi – Simon B Daby, a member of the Central Board Committee of the United Liberation Movement for West Papua (ULMWP), said that West Papuans appreciate the Oxford City Council for granting the Freedom of Oxford” award to the Chairman of ULMWP Benny Wenda. Further, he said this award proves that the international community paid attention towards the efforts of the ULMWP and Wenda in fighting for Papuan self-determination.

The Freedom of Oxford is the highest honour given by the City of Oxford to people who have a significant impact on society. Benny Wenda is an internationally recognized diplomat and leader for the West Papua free movement. Since being granted political asylum in England in 2002, Wenda has fought tirelessly for the self-determination of West Papuans from his campaign office in Oxford.

He also said the demand of West Papuan for self-determination aligned with the Indonesian Constitution 1945 in which stated in the first paragraph of the Preamble, “whereas independence is the inalienable right of all nations.” It is also following the UN General Assembly Resolution No. 1541 (XV) of 1960. The resolution stated that if a region has a geographical location and cultural ethics that are separate and different from its ruling and administrative state, this region is entitled to claim its right of self-determination.

Meanwhile, a member of the Legislative Committee of ULMWP for Anim Ha region, Pangkrasia Yeem, expressed his gratitude to the Oxford City Council for this award. He said the Freedom of Oxford award for Benny Wenda is a special gift for the Papuan people.

Furthermore, he asks all West Papuans to be united in advocating the ULMWP’s efforts for West Papuan self-determination. “With our support to ULMWP, we (will) establish our state as an independent and sovereign nation,” said Yeem on Sunday (14/7/2019). (*)