Two residents of Papua’s Serambakon missing since May 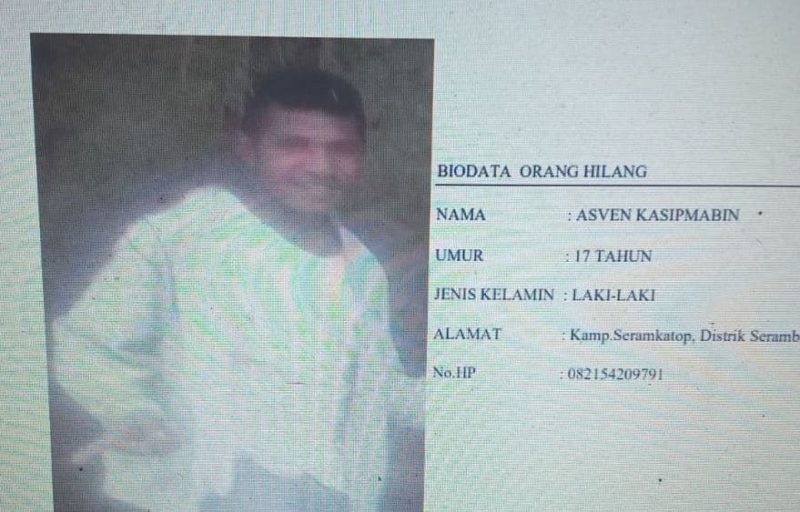 Asven Kasibmabin (17 years old), high school students in Oksibil reported missing since May 18, 2021. - A Screenshot Of the Document Timeline

Jayapura, Jubi – Two residents of Serambakon District, Bintang Mountains Regency have been reported missing since May 18, 2021. They have not been found to date.

The missing persons are Asven Kasipmabin, a 17-year-old high school student, and Jekson Sitokmabin, 20 years old. Both are residents of Seramkatop Village. According to the document received by Jubi, they both went missing at the same time when a shooting occurred in neighboring village Yapimakot at around 8 p.m. local time.

On May 18, a number of residents along with several members of the Indonesian Military (TNI) took a public minivan from Oksibil District to Seramkabon. When reaching Yapimakot, the car could not climb the incline between Yapimakot Village and Wanbakon Village it rolled back three times. Suddenly, a gunshot was heard, which was thought to have come from inside the car. After some time, another shot was heard from atop the incline.

Kasipmabin and Sitokmabin probably passed the crossfire site. They were on their way back to Seramkatop, driving on a motorcycle without lights from Oksibil. Residents who saw the two shouted and warned them not to continue their journey because there were sounds of gunshots but they continued anyway.

A Seramkatop resident contacted by Jubi said the family and neighbor had repeatedly looked for Kasipmabin and Sitokmabin but to no avail. “We have done everything, reported the case to the police, searched by ourselves for two weeks. But their whereabouts remain unknown. The police neglect [the report],” they said.

The residents were generally disturbed by the addition of security forces in Serambakon District since April 7 last year, which had prevented residents from visiting relatives’ homes and making livelihoods such as hunting and gardening.

“The security forces suspected all activities as part of the separatist movement. That’s why shootings occur,” said Jubi’s source.

Residents also complained that since the deployment of troops to their village, their livestock and gardens were often lost or damaged, stolen by people. A number of empty houses were also destroyed, and their contents were stolen. At least six houses have been destroyed and two pigs and 13 chickens missing.

Pastor Dean of the Bintang Mountains Dean RD James Kossay confirmed that two residents of Serambakon District had been missing since May 18. “The information is true,” said Kossay.

Jubi has contacted Papua Police’s spokesperson Sr. Comr. A.M Kamal about the matter but Kamal said he could not confirm the information. He told Jubi that the Bintang Mountains Police chief would call back instead to clarify the information. (*)

No truce nor dialogue unless UN steps in: TPNPB

Another Side of Papua Could be Seen from Cultural View