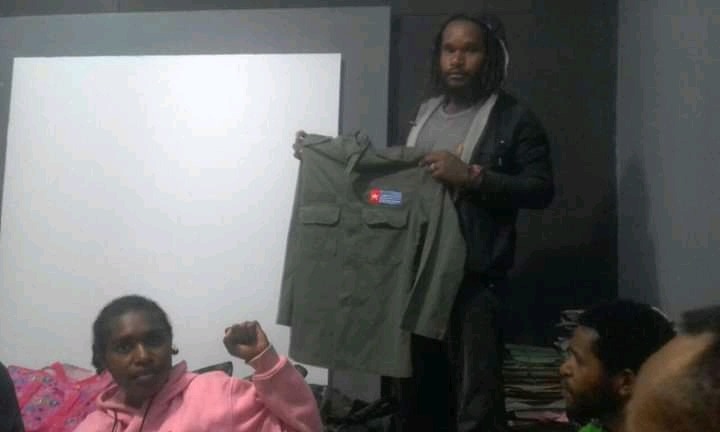 The activists Yus Iyai (Chair of KNPB Dogiay) and Siska Auswe (KNPB Consulate member) who were going to return home to Nabire arrested at the port on Sunday (17/02/2019).

“The police checked our bags and found seven pairs of clothes with ‘morning star’ logo among 23 pairs of clothes, two books about the struggle of Free Papua. It is a wrong act because the police cannot distinguish between flag and logo,” Iyai told Jubi by phone on Tuesday (19/02/2019).

Meanwhile, according to officials, both activists carried the Morning Star Flag. Therefore, they were interrogated and stayed one night at the police detention before being released. As a result, they forced to delay their travel because their ticket was forfeited.

“We produced these clothes for sale in Papua because we need extra money for tuition fee. They interrogated us with silly questions, “Are your OPM? Do you have a Papuan flag? Do you want Papua to be free? When do you think you’ll be free?”

In regards to this case, Bitung Police Chief Adjunct Commisionaire Stefanus Michael Tamuntuan refused to give information when contacted by Jubi via cellular phone. He asked the reporter to confirm him directly. “I am sorry, the issue like this cannot be confirmed by phone. So, I cannot give further information,” he said. (*)