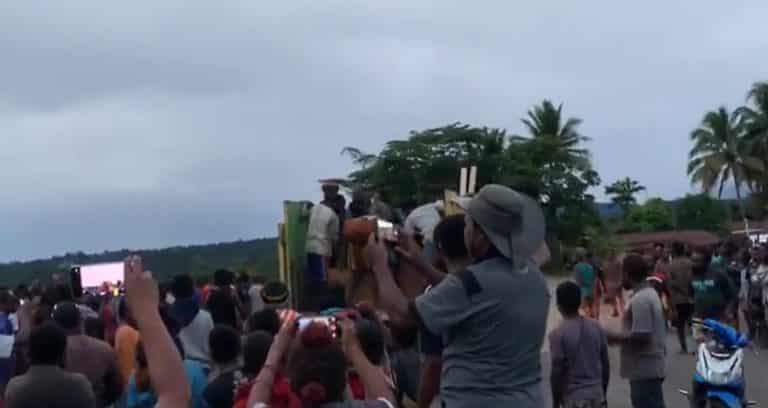 Nduga residents occupied the road toward the Keneyam Airport to claim authorisation for burying the bodies of Selu and Elias Karunggu at the edge of Keneyam Airport. – Courtesy Jubi

Jayapura, Jubi – Two civilians from Nduga Regency were allegedly killed by Indonesian soldiers who were based in this area on Saturday (18/7/2020).

Nduga parliament member Ronald Kelnea stated the two Nduga residents shot by Indonesian soldiers near Keneyam River were civilians. They were farmers who were on their way to Kenyam, the capital of Nduga Regency.

Moreover, he said the two victims did not bring any guns. On Saturday, 18 July 2020, at around 3 pm local time, Selu Karunggu (20 yo) and Elias Karunggu (40 yo) was shot dead by soldiers on-duty near Keneyam/Lisabak River located approximately 500 meters from Keneyam. Both father and son were parts of Nduga refugees who wanted to return to Keneyam from their refugee camp in the forest.

A refugee from Paro Sub-district said he and other refugees from two sub-districts Paro and Yenggelo wanted to return to Keneyam after living in the forest for a year. Because Elias and Selu came from Yal Sub-district, they arrived at Keneyam River separately from other refugees.

“Those who wanted to cross Keneyam River were interrogated by Indonesian soldiers at the military post located nearby the riverbank, including Selu. But after being interrogated, he was beaten and detained by soldiers,” said the refugee.

At that time, Selu wore a camouflage t-shirt and held an axe. According to this refugee, axes used to cut trees for firewoods when they slept over on their way or for building emergency bridges to cross rivers on the way to Keneyam where geographically located in the low land in the southern area of Nduga.

According to a Jubi’s source who was at the scene, the bodies of father and son were buried at the gravesite of the late driver of the Nduga deputy regent who also shot some time ago.

The Communication Chief of Military Command of Cenderarawih XVII Lieutenant Colonel Arm Reza Nur Patria when confirmed by Jubi claimed not to receive detailed information about this incident yet.

However, a military officer stated Elias and Selu were members of the insurgent group under Egianus Kogoya.

“They have been targeted, marked as members of the armed insurgent group under Egianus Kogoya. We have all evidence, such as pistols and ammunition,” explained Colonel GN Sunastawa, a military officer in the Combined Defense Territory Command III, which includes Papua and Maluku territories.

Furthermore, Colonel GN Sunastawa said this incident was an ambush because both Elias and Selu had been a target by Indonesian soldiers in Nduga.

He added that on Sunday (19/7/2020) at 4 pm local time, there was a meeting between the representatives of Karunggu family, Battalion PR 330 and Baliem Sector, and Regional Military Command and Kenyam Police. Also attending the meeting were Nduga Regent Yairus Gwijangge, representative of Keneyam Police Adjunct Second Inspector Police Mutholib.

The meeting was to reveal the chronology of the incident, to show evidence, and to discuss the mechanism of conflict resolution by the regent to residents. Also, it was to address the issue of the handover of the victims’ bodies and the funeral. Lastly, the meeting was also to clarify rumours in public that the victims were not members of the armed group. (*)