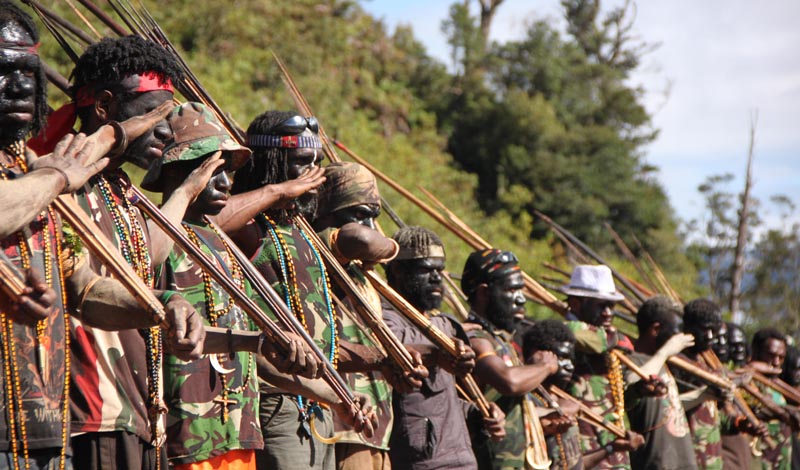 An illustration of one of the OPM groups in the Central Highlands of Papua - Doc. Jubi

An illustration of one of the OPM groups in the Central Highlands of Papua – Doc. Jubi

Jayapura, Jubi – Papua legislator criticized a framing made by an online media in Jakarta toward an involvement of Free Papua Organization (OPM) in the riot between supporters of candidates for the head of Puncak Jaya, Papua,).

Laurenzus Kadepa, Members of the House of Representatives Commission I of Papua in charge of government, politics, law and human rights, asked all parties outside Papua, including media, do not seem to know better the condition of Papua than those live in Papua.

Until now there has been no statement from the competent party who called the alleged involvement of OPM in the violent supporters of candidate pairs in Puncak Jaya, he said.

“True OPM will never want to engage in local politics, what they stand for is clear, not for local politics, if any party claims that OPM is involved in local elections and politics in Papua, it is an artificial OPM, not a true one,” he said to Jubi on July 4.

According to him, the reporting of Papua conditions that do not fit facts, resulting negative view on Papua from people outside.

“The ways in which this was covered makes the Papuan problem continues, which further complicates the atmosphere as if people outside Papua are more knowledgeable of the condition in Papua,” he said.

With regard to the electoral situation in some areas, especially in Papua which caused confusion, NasDem Party politicians were more likely to support the idea for election of regents, mayors and governors returned to the House of Representatives.

Some of the reasons he said is relate to the huge budget spent, while managed by the organizers who are not neutral. In addition, competing candidates are immature and not ready to lose.

Another reason is weakness of law enforcement and all parties involved in the election failed to perform their respective roles. Thus it is making situation even more unsafe and the people becoming victims.

“The election of regional heads should be returned and elected by the House of Representatives, unless the legislative elections and the presidential elections are conducted through direct elections,” he said.

While the Papua Police Chief, Inspector General Boy Rafli Amar ensure the dispute that occurred in Mulia, the capital of Puncak Jaya Regency, due to provocations of political elites who capitalized community.

According to Boy, political elites have provided poor education to the community and they are exploited. “I deeply regret and also feel sorry there have been victims that push us to ordered Puncak Jaya Police to take firm action,” Boy Rafli told reporters in Jayapura, Monday (3/7/2017) as quoted by Antara.

Pilkada results in Mulia are still being processed by the Constitutional Court. Boy suspects the supporters of mayor’s candidates pair of Puncak Jaya region that provokes and attacks other groups already have a picture of the results of the elections that push their action.

Boy continued to proceed to Mulia on Tuesday (July 4) to see the current situation and conditions in the area.

The fight against each other using traditional weapons took place in Mulia, last weekend, which left 20 people injured, one dead, and 15 honai (indigenous houses) burned.(*)

Rally against criminalization of Papuan governor