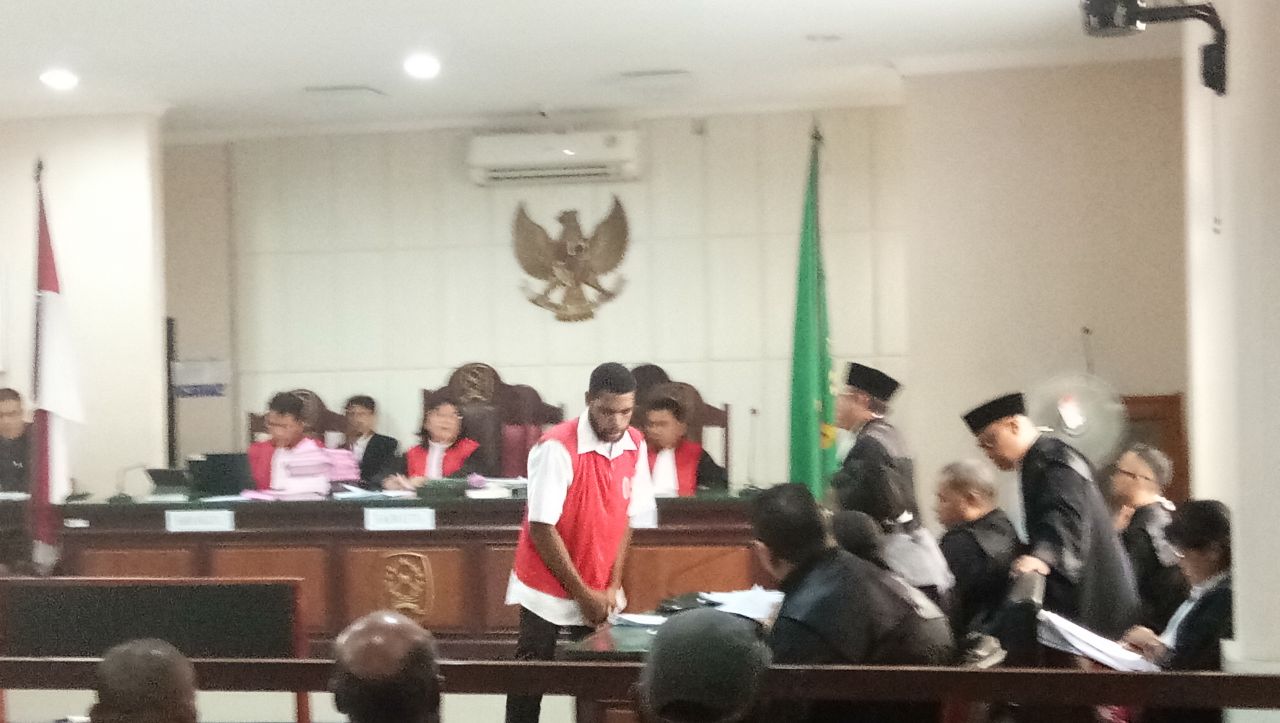 Defendant Dorti Kawena during a consultation with the legal counsel team in the hearing held in Jayapura on Wednesday (6/11/2019). – Jubi/Angela Flassy

Jayapura, Jubi – Jayapura District Court Class IA started the hearing case on alleged the criminal acts of violence and destruction in Jayapura that occurred on 29 August 2019. The legal advisor stated that he would submit an exception on the prosecutor’s charges to the four defendants.

The hearing court which chaired by the Judge Maria Magdalena Sitanggang with two other panel members Muliyawan and Abdul Gafur Bungin started at 1 p.m where the prosecutor Adrianus Y Tomana named four defendants who tried for separate cases.

In the first trial, Dorti Kawena who’s only 18 years old was charged with deliberately destroying goods or committing violence to cause injuries as stipulated in Article 170 paragraph 2 number 1 of the Criminal Code (KUHP). The prosecutor argued that Kawana, along with the mob, carried out destruction along the road from Kotaraja to Governor Office at Dok II. Furthermore, the prosecutor, in detail described the method of destruction by throwing stones.

In the meantime, the last defendant on Wednesday trial was Wilem Walilo, as a civil servant from the Sanitation Office. He was arrested on 30 August 2019 for carrying ‘badik’ (sort of knife) inserted between his waist. At the time of his arrest, Walilo who’s resident of Dok V Bawah was on the road toward APO to feed his pigs.

When crossing the road in front of the Papua Governor Office, Walilo passed the mob of students. Therefore, he turned his motorbike to Dok V Atas towards APO. He was then arrested by police while on the road for carrying a sharp weapon. The prosecutor charged him with Article 2, paragraph 1 of the Law No 12 of 1951.

As the legal advisor of the defendants, lawyer Sugeng Teguh Santoso declared to submit an exception to the court. “In the trial, we do not only use the criminal law perspective but also refer to Article 170 of the Criminal Code or the Emergency Law Number 12 of 1951. We will explore the politics of humiliation against indigenous Papuans. We will convey this issue on our exception next week,” said Sugeng.

Suspension of the trials against eleven defendants

“We (rejected because) only accepted four trials, while there is no submission for other trials,” said Sugeng Teguh Santoso.

Meanwhile, the panel of judges states the issue of summons was only a misunderstanding in communication. Therefore, they asked the understanding of the legal counsel team to let the judges opened the next trials. However, when they found out that the eleven defendants have not yet signed the letter of statement for their legal counsel, the judges decided to suspend the hearing until Thursday (7/11/2019).

In the meantime, the legal counsel of defendants Federika Korain of the Legal Aid Institute (LBH) of Gabah Papua stated that based on her notes, only four defendants already have legal documents for the hearing at court. Therefore, Korain were questioning the prosecutor to call the eleven defendants to the trial.

“We finally asked the hearing to discontinue due to some issues of the legal procedures. For instance, most of the defendants have not yet received their charges. They have not received the summon formally. Even, some of them were arrested with unwarranted legal status.

As the Secretary-General of Peradi (the National Leadership Council of the Indonesian Advocates Association of Luhut MP Pangaribuan), Sugeng Teguh Santoso said Peradi had set an advocacy team who would provide legal assistance for 27 indigenous Papuans arrested concerning the mass riot of 29 August 2019. The establishment of the advocacy team was a response to the request of the Papua’s People Assembly to Peradi.

“MRP requested Peradi to provide advocacy. After discussion, we thought that the defendants of indigenous Papuans need our assistance. We need to make further approach besides the legal perspective. In doing this, we will work with LBH Gabah Papua,” he said.” (*)