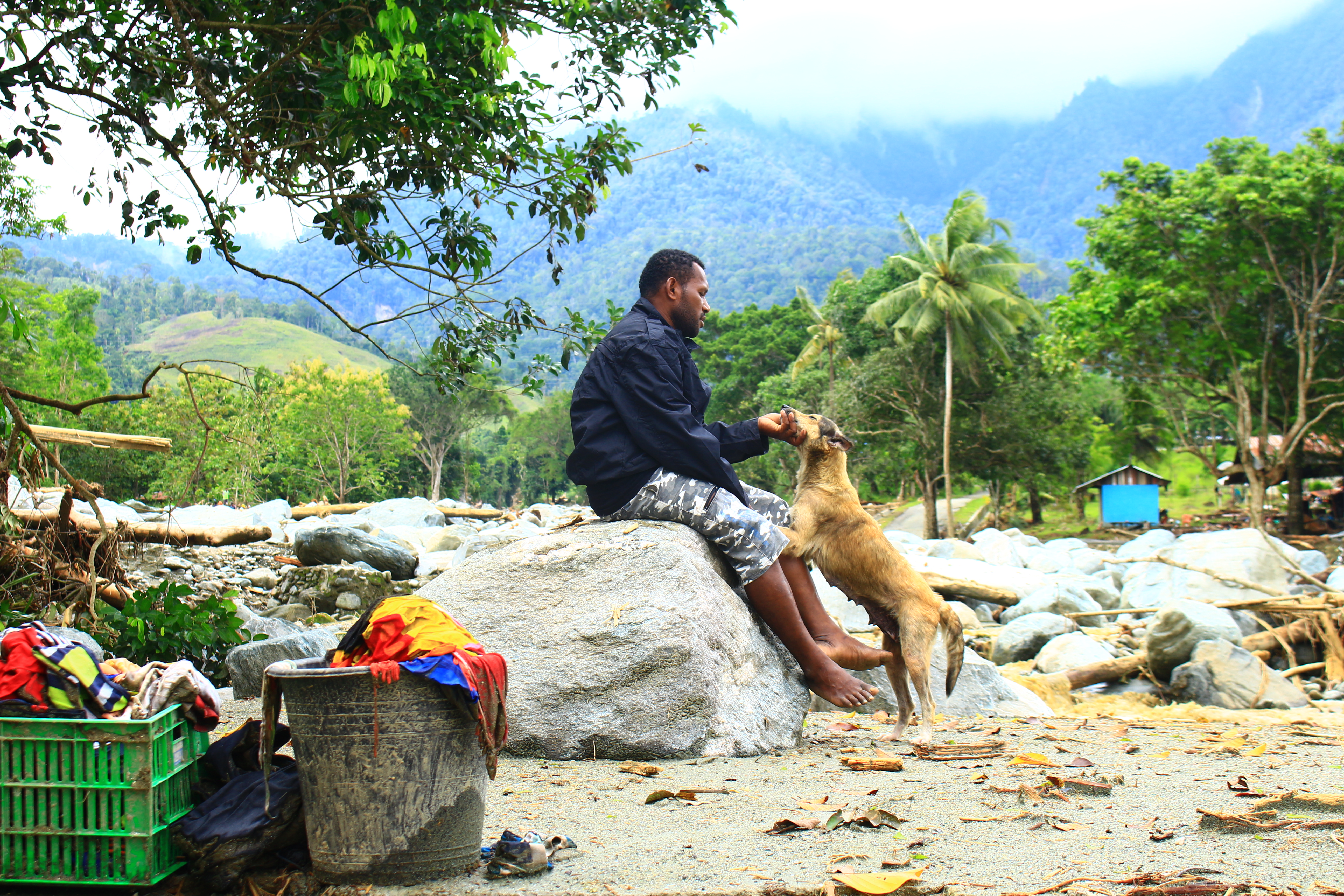 Stenly Monim and his dog are among the ruin of his parent’s house which is only the foundation left and covered by stones. -Jubi/Kristianto Galuwo

A HOUND, totally wet, are walking around, scrapping over damp branches lying on the ground. Thirsty, it moves to a puddle for a sip of water. Doesn’t know what to do, it turns to sniff piles of stumps that just tumbled from trees. This little dog is surrounding by hundreds of logs, which some begin to decay, piles of stones that left over from a massive flood that stroked the most of Sentani City on Saturday night (16/3/19).

Running, it follows its master, Stenly Monim (31 years old). “Her name is Moli, quite old now. She has lived with us for ten years,” he told Jubi on Thursday (21/3/19) at Kali Kemiri, Hinekombe Village, Sentani Sub-district, Jayapura Regency, Papua Province.

Stenly survived from the flood. The place he used to live in the intersection of Kali Kemiri (a river’s name) now looks like a shadowy island of the size of a mini soccer field with some trees left. He met Moli on Wednesday (20/3/2019) midday when he was walking through the riverbank. “I was surprised and excited because I thought Moli is dead.”

When first met, said Stenly, Moli was exciting. She run and jumped to him, circled him around and licked his hand and woofed. She has some scratches on her back hit by the flood that similar to Stenly’s back.

After five minutes walking along the location that used to drain by the water from Kali Kemiri, he stops in front of the ruin of his house with Moli who’s still around him. He admits this is the first time he returns home after the flood hit this place.

Before visiting this place, he left his eleven years old daughter Risyelita Monim to his relative whose home is not far from his house. “This is my house. I am usually just watching from distant. I tell my daughter to not come here because she might still be traumatised. She is the only child I have who still alive now.”

Stenly couldn’t save her second daughter’s life. Martina Marice Monim (9 years) died and had just been buried on Wednesday (20/3/2019) at Kampung Sereh, while his youngest son Alberto Monim (1) is still missing.

Meanwhile, his wife Lara Merlin (25) survived because she was visiting her relative at Ifar Gunung. Currently, Stenly and the rest of his family stay at his relative’s house.

A premonition being late interpreted

At that tragic night, Stenly was anxious because of the heavy rain lasted until the dark. He continuously went to the riverbank observing the stream. An hour later, the water massively flew till it eroded the edge of the ‘island’ where five houses stood.

Usually, Stenly said, no matter how heavy the rain was, it never creates such stream like that night.

“But, that night was strange. Our location is quite high, but the water filled it very fast. I never thought it could have happened. I took my children immediately to my parent’s house where my mother, siblings and other families live. Its location is higher than ours.

Stenly’s house is in the middle. When water and sandy mud flooded this area, he informed his two neighbours. Then, together they went to his parent’s house. He also asked the neighbour next to his parent’s house to join. “ Around twenty people were gathering at that night, plus my siblings and their children.”

Suddenly, we heard a crash, said Stenly, but we couldn’t go anywhere. The river has overflowed, and water covered the two sides of the banks. No bridge to cross over.

Then, we heard something heavy bumped on something. The water volume was very high, and we were all scattered,” said Stenly.

According to him, the flood just swept everything away once. But logs and stones continued rolling and scrolling pushed by the current. He slumped into the piles of logs which eventually became a shield for him.

He shouted calling the names of his children and relatives. Suddenly, he heard the voice of his older daughter Risyelita. He tried to get out of the logs and searched for his daughter. 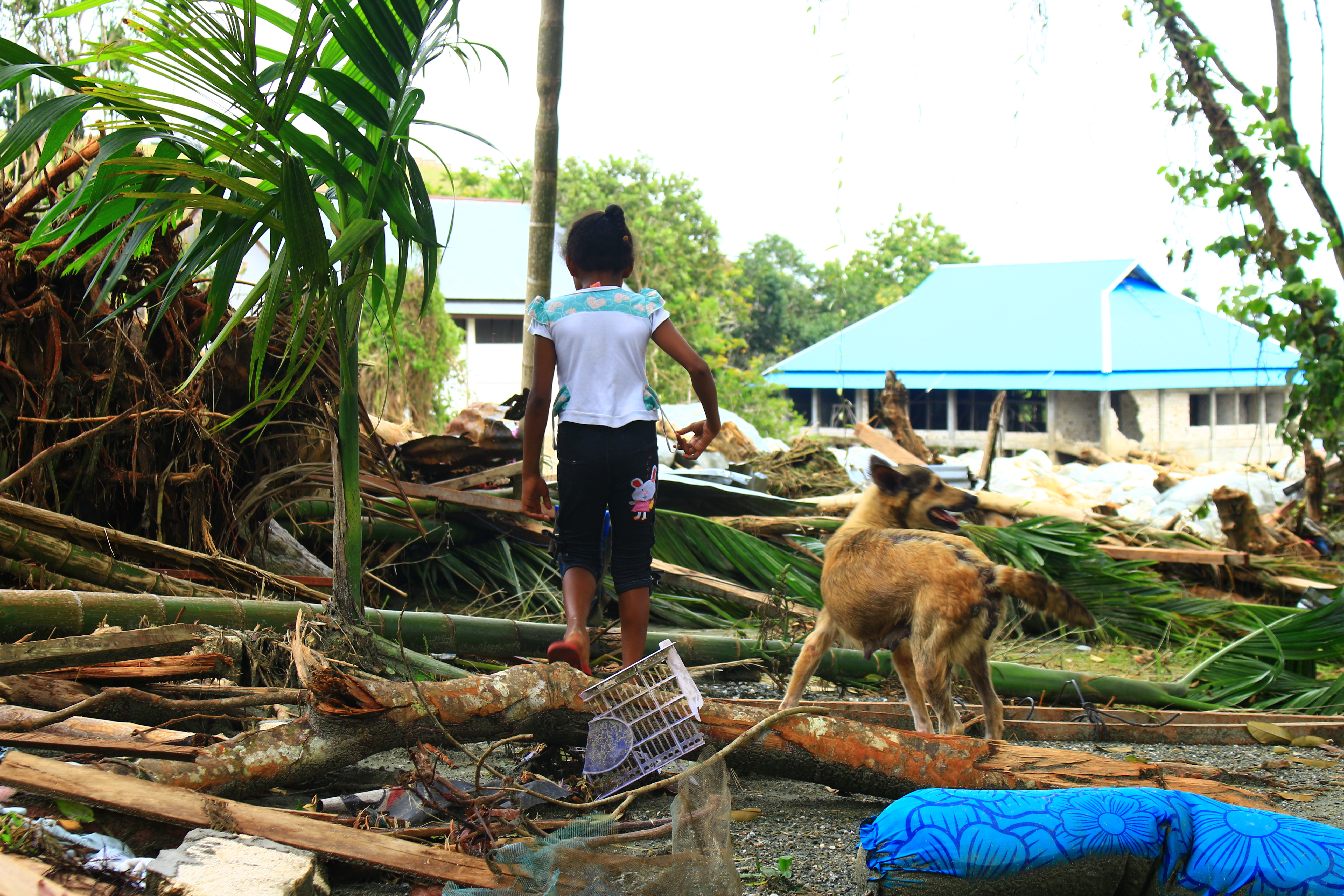 “I found Lita was not far from me. She held a log. I immediately grabbed her and held her tight while holding on the branch.”

Pulling up his energy, he bumped against the stream while holding his daughter and trying to find his other children who separated from him. But he couldn’t get them.

After swimming dozens of meters to save his daughter’s life, three men who were running on the other side of the river saw him. They stopped and pulled him two fallen areca palms before going away.

“I told my daughter, ‘Hold my back tight. I’ll cross the river with this areca tree’. At first, she said she was afraid. But, I said, ‘I will save you. You must be brave’.”

When he tried to across her daughter while holding the areca tree, the current hit them. They fell over and drifted away. But they almost close to the bank. When he could stand on the ground, he runs along the riverbank screaming his daughter’s name.

“Up to hundreds of meters I run. From the other side, I saw Lita managed to reach the edge of the river,” he said.

When he’s telling this story, from a distance faintly heard Lita’s voice calling her father. The girl ran passing through the sandy mud and come closer to Stenly, who looks resigned. He calls his daughter. He said no word to order his daughter to leave this place. Instead, he greets her, now his only child whom he can embrace alive.

Grief after a disaster

Stenly’s second daughter, Martina, was found in a position embraced by her aunt on Sunday morning (3/17/2019), both of them dead.

“The rescue team came at around one o’clock in the evening. Their body found in the early morning. They were not far away from me that night when I was under a pile of wood. But I didn’t see them or hear their voice,” he said.

Meanwhile, His son, Alberto, reportedly washed away to Gajah Mada BTN. He obtained this information from his cousin who survived and is treated currently at Abepura Hospital, Jayapura City.

“My cousin, Rina Sokoy, held Alberto and they drifted to BTN Gajah Mada. It’s about two kilometres away from here. But, Alberto was detached when a log hit Rina. I hope someone can find him alive. I miss him, and I keep praying,” he said.

According to Stenly, his relatives and three neighbours also experience the same story. They lost several family members. Some are dead, while others are declared missing. But, there are those who survived and now treated in the hospital due to injuries and broken bones.

To get detail information about the number of residents living in Kali Kemiri, Jubi met the chief of neighbourhood (RW 7) Andreas Hikoyabi (44 years old). He said around 700 people living on the banks of Kali Kemiri.

“About more than two dozen bodies have been found. Six of them have been picked up by the family at Bhayangkara Hospital. Yesterday, the rescue team carried sniffer dogs to search another body here,” he said while monitoring the work of the Joint Search and Rescue Team on the riverbanks of Kali Kemiri on Thursday (03/21/2019).

Residents suspect that there are bodies that still buried under the mud because of flies flying on the scene. Then, Andreas points out to the ruins of the house covered by thick mud which the rescue team tried to exavagate.

“In that house, there are seven family members. The couple and their three children have not found yet, while two children safely found.”

A member of Jayapura SAR Team, Sangap S (35) said the team keep searching for victims in Kali Kemiri because it’s a location that most influenced by the flood. However, until late afternoon, the rescue team still find no casualties.

“First, we found a dead dog up there, but we didn’t bury it. After that, we went down, and smell a stinky odour. We thought there are bodies. We started to dig but found nothing. So, we buried the dog, and the smell disappeared. It turns out that the smell was coming from the dog body that blew by the wind,” he said. (*)