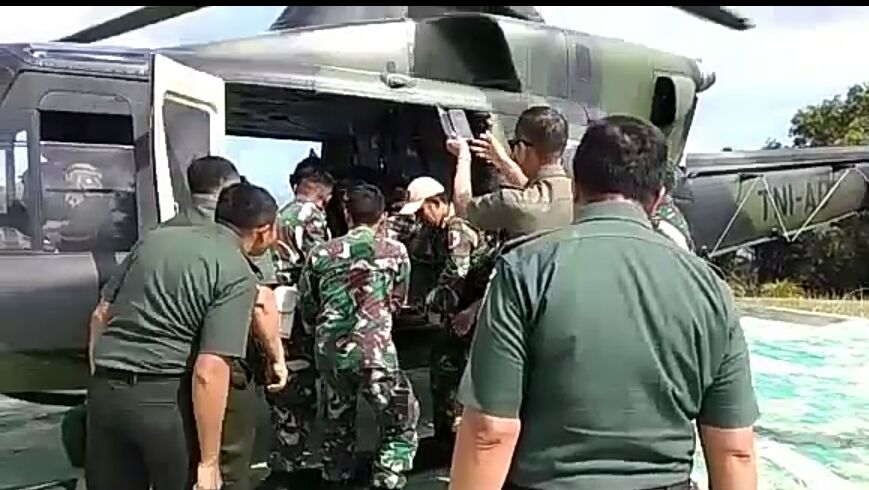 The evacuation of military personnel shot by the resurgent group in Papua on Monday, (30/12/2019). – Jubi/SPC

Jayapura, Jubi – Spokesperson for the West Papua National Liberation Army and Free Papua Movement (TPNPB-OPM), Sebby Sembom, said the organisation’s Victoria Headquarters under Orelek Jikwanak is responsible for the ambush and shooting against the Indonesian soldiers at the Indonesian and PNG Border. The attack which took place at Bewani Baru, Keerom District, Papua, occurred on Monday noon (30/12/2019).

In the press release received by Jubi on Monday evening (30/12/2019), Sembom stated, “We need to clarify that the TPNPB-OPM of the Victoria Headquarters led by Major Jikwanak is responsible for the shooting in Bewani, not by Jefferson Pagawak as addressed in many Indonesian media.”

According to him, the armed ambush against the Indonesian soldiers who were taking logistic supplies at Kali Asin Post in Yeti Village of Arso Timur Sub-district, Keerom District, was part of the national military strategy of free West Papua.

“Therefore, TPNPB officially states that the national warfare for West Papua liberation would apply to all West Papuan territories, from Sorong to Merauke and Samarai,” he said.

Further, he said this confrontation should occur because OPM and its military wing TPNPB have been and are fighting to get a full right of independence from the Indonesian Government.

“To start a war and an ambush at the Indonesian military post, those who were fully responsible are entire TPNPB leaders in all territories of the Land of Papua,” he said.

In the meantime, Colonel Infantry Binsar Parluhutan Sianipar, the resort military commandant of Praja Wira Yakti/172, said a soldier died because of the bullet hit his chest and went through his back.

A group of ten soldiers was attacked and shot from the height when taking logistic supplies at Kali Asin Post.

“We are not sure whether any members of the resurgent group are wounded because they came from the summit. They (who attacked) were four. They had about three or four weapons,” said Colonel Sianipar. (*)