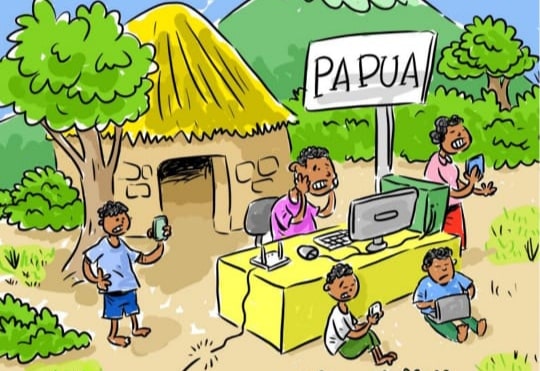 Jayapura, Jubi – The Southeast Asia Freedom of Expression Network or SAFEnet conveyed the condition of internet access in Papua in an online discussion on the launch of the 2021 Digital Rights Situation Report on Wednesday, March 2, 2022.

On the legal side, Damar said, Indonesia had a bad track record in fulfilling internet access. This is due to the issuance of regulations prone to be misused to limit people’s freedom of expression. Damar said more and more public officials used the Electronic Information and Transaction (ITE) Law to silence criticism. According to him, Article 27 paragraph 3 of the ITE Law on defamation is the most popular article used to limit digital expression.“In 2021 there were 17 victims reported under Article 27 paragraph 3 of ITE Law, six victims under Article 45 paragraph 3, and five victims were charged with the ITE Law without specifying the articles. Most of them were activists and journalists,” he said. Critical voices on the internet are also often silenced with Articles 14 and 15 of Law No. 1/1946 on the Criminal Code (KUHP), Damar added.

Internet Governance researcher Sherly Haristya said that according to her research, social media platforms tend to use the excuse “such content should not be on this platform” to remove certain content.

A lot of good and critical content is removed by social media platforms because of these vague rules. “With the existence of “gray” content in Indonesia, we need to cooperate with each other. Social media will not be able to understand the context of problems in Indonesia. However, this does not mean that social media should turn a blind eye. Rather, it must work with the civil society so that they can make the right content moderation decisions,” said Sherly. (*)

Chairperson of DPRP : Every case occured there (Puncak Jaya), the regent was not there