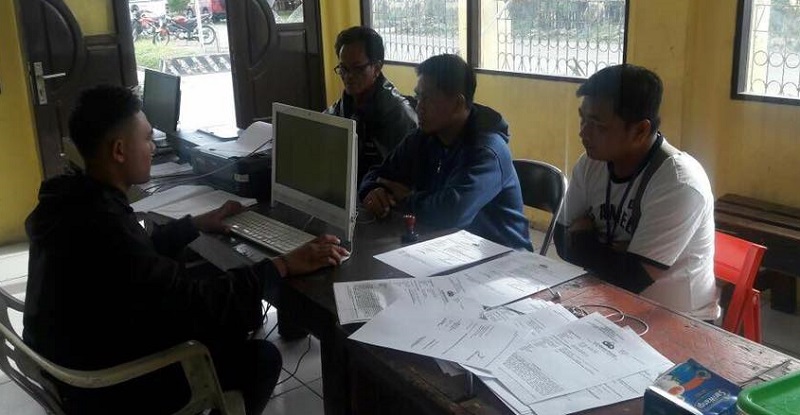 Described by Riyanto, this threat began when three journalists respectively, Ricardo Hutahaen (Metro TV), Audi (Jaya TV) and Mesak (TVRI), done their coverage of the trial. Initially, when the three journalists entered the third courtroom, they were banned to take pictures by the presiding judge who led the trial.

The judge had asked the origin of the three television journalists. After all three gave their identity, they were allowed taking pictures freely without disturbing the trial.

“The mob sitting in the room had forbidden the three journalists to take pictures but the presiding judge defended them,” said Riyanto.

When the trial resumed after being suspended, the three journalists sat down to interview the court. But suddenly 20 people came to them.

“They threatened to kill the three journalists if they did not remove the pictures they had taken, and even Ricardo cameras were taken away and (and the photographs) were forcibly removed, they also dismissed the three journalists from the courtroom that journalists had to secure themselves out of the Wamena District Court,” Riyanto said.

Separately, IJTI Chairman Yadi Hendrayana, in a written statement sent Saturday, said the IJTI and the Anti-Violence Task Force of the Press Council will advocate and investigate the actions taken by a number of individuals to the TV journalist in Wamena, Papua, while covering the trial of election violation of Tolikara Regency Election Commission.

Yadi firmly asks for police to be more serious and to take firm action against anyone, civil or non-civilian, who has threatened and perpetrated violence against journalists.

“The removal of photos and videos is related to the coverage of sensitive issues such as the Papuan independence movement,” said Coordinator of the AJI Advocacy Division of Jayapura, Fabio Maria Lopes Costa in his press release early in 2017.

Three cases were in Jayapura City, two cases in Wamena, and the rest each in other five areas.

Among the 10 cases, seven cases are freedom of the press that related to the security apparatus, two cases with security forces, and one case with DPRD members.

“In conclusion, violation of press freedom in Papua is apparently conducted by parties who are members of the three pillars of democracy, namely the executive, judicial, and legislative,” added Fabio.(*)

Freeport is a Nightmare for Papuans