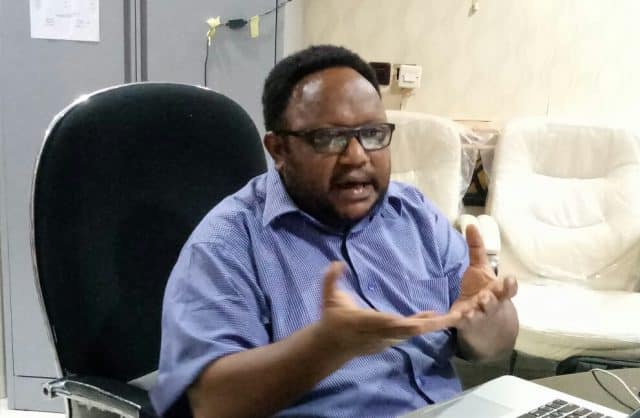 Jayapura, Jubi – John NR Gobai, Secretary II of Papuan Customary Council, asked the local authorities to repatriate thousands of Intan Jaya refugees who fled to Mimika Regency, Papua, after the deployment of additional troops in the region in December 2019.

Further, Gobai questioned the military’s decision to deploy more soldiers, but the armed conflict in Intan Jaya continues to occur. Instead, it creates new problems forcing more locals to flee. “If an area is already secured, why have the authorities not repatriated those refugees? What is going on here? Is there a great design behind this?” Gobai told Jubi on Thursday (1/10/2020).

Thousands of Intan Jaya residents gradually fled to Timika after the massive military deployment in mid-December 2019, followed by the armed conflict involving the Indonesian security forces and West Papua National Liberation Army. Up to March 2020, at least 2,114 residents of Intan Jaya had been displaced.

Gobai said most of those refugees settle at different locations in Timika, the capital of Mimika Regency. Some live with their relatives, while others rent houses. A new refugee wave recently occurred following the murder of Yeremia Zanambani at Hitadipa, Intan Jaya Regency, on 19 September 2020.

The series of violence that forced thousands of people to displace have left a question asked by Gobai whether this is a scenario by Freeport to extend their mining area or a strategy played by the military to determine a war zone against insurgent groups. “Where will the indigenous live?” asked Gobai.

Therefore, he asked all relevant parties, including the government, PT Freeport Indonesia, security forces, provincial and local houses of representatives to bring those refugees home.

In the meantime, the Chairman of GKII Synod Region 1 Papua, Rev. Petrus Bonyadone, asked the military to withdraw their troops from Hitadipa to let residents back home. “There is a statement that they would not come back until the military leaves the region,” he said.

Separately, Intan Jaya Regent Natalis Tabuni admitted that he had taken some actions to address the armed conflict in this area. First, he already communicated with the regional Papua police chief and deputy chief, regional police inspector, both regional and local military commanders, as well as local religious and customary leaders and the wife of the late Rev. Zanambani.

Moreover, Tabuni said he had organised two grand appointments inviting all stakeholders, including church leaders, customary and youth leaders as well as women leaders. “We entirely support TNI and Police to investigate the incident. We also invited all stakeholders and held two grand meetings at Intan Jaya Regent Office’s auditorium. And we already had an agreement,” said Tabuni.

Therefore, he hopes the joint agreement between the government, security forces and citizens would be able to resolve the armed conflict in Intan Kaya. “We already accommodate people’s expectation that later articulated it into a joint agreement,” he said. (*)

West Papua is Inseparable from the Pacific