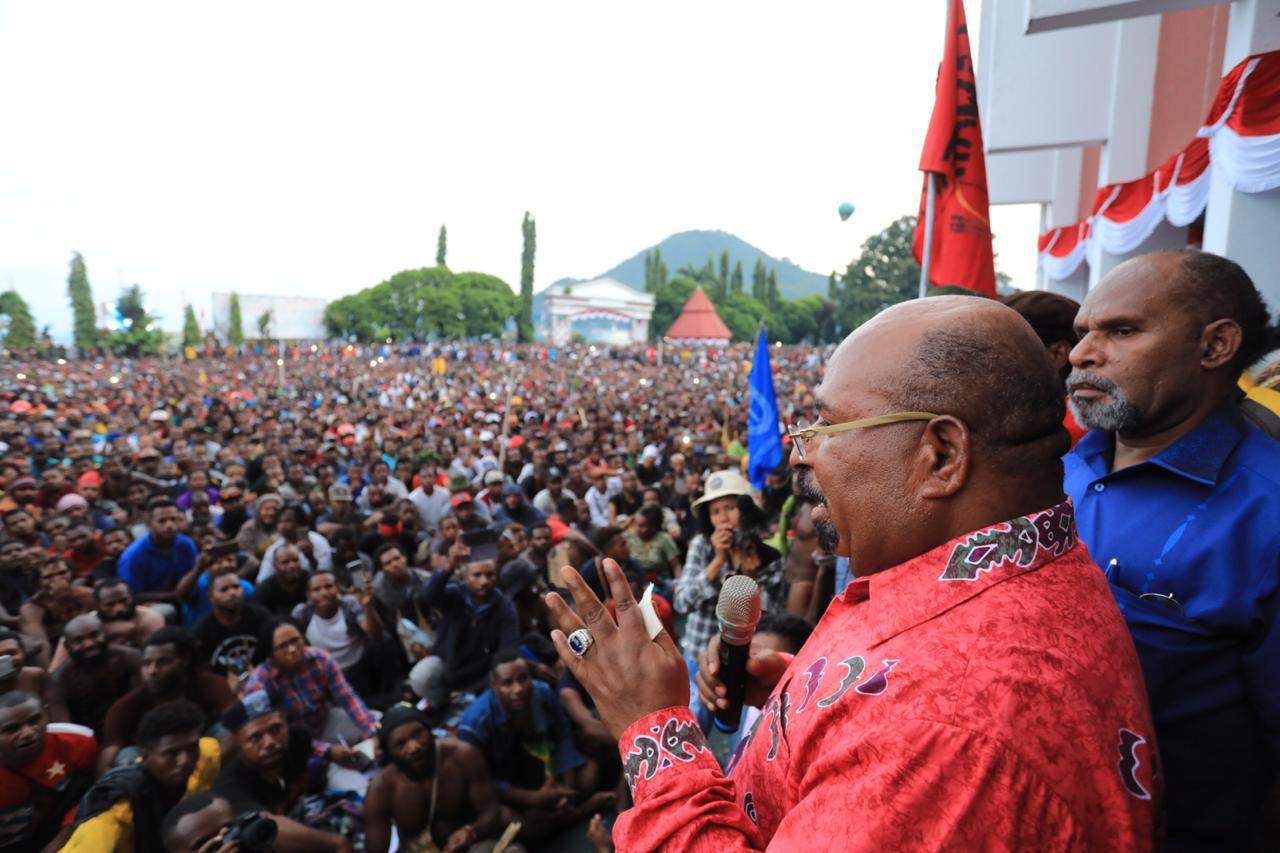 Jubi, Papua – Monday, 19 Augusts 2019. Thousands of students from the Faculty of Social and Political Science of the University of Cenderawasih closed the university’s gate, the only access to its Waena Campus in Perumnas 3, Heram Sub-district of Jayapura Municipality.

The gate became the point of a mass rally in responding to the acts of violence and racism against Papuan students in Malang and Surabaya a few days ago. In addition to the University of Cenderawasih, masses also gathered at some points in Expo Waena, the University of Science and Technology Jayapura, Abepura suburb and Jayapura City

Thousands of Papuan communities of different backgrounds ranging from students, KNPB activists, community-based organisations, the association of regional student dormitories in Jayapura, and ordinary people including children, joined the rally. Their number grew bigger and bigger as people united the crowd on the road. Walking and riding motorbikes, they walked towards the governor’s office located in the central of Jayapura City.

Before reaching their end, first, the crowd stopped by the office of Papua’s People Assembly (MRP) in Kotaraja. There, Victor Yeimo, the KNPB spokesperson for international affairs, asked assembly members to join the crowd.

“If MRP wants to protect the dignity of Papuans, let’s join us. Indonesia mocked us by calling Papuans ‘monkey’. This humiliation was not coming from the local mob, but soldiers and the police as well,” said Yeimo, who was the General Chairman of the Central KNPB in his five-minutes oration.

The crowd then continued their long march passing Skyland and Entrop roads. All Papuans whose houses nearby were very supportive of the protesters by giving bottled mineral water. They also showed their support by clenching their hand and yelling ‘free Papua nation’. Along the road, people chanted “we are nor red and white, but the morning star” and yell out ‘freedom’ and ‘referendum for Papua’, while around hundreds of police and dozens of military personnel stayed close to them.

When the crowd arrived in Taman Imbi in the central of Jayapura City, hundreds of protesters made up activists, residents and youth communities have waited for them. Meanwhile, hundreds of police officers also deployed to the scene. All stores and shopping centres in Jayapura City mostly closed.

The city almost entirely occupied by indigenous people. Only one or two non-Papuans appeared standing near the protesters. Jayapura City, the centre of business where homes for mostly non-Papuans, seemed entirely belong to Papuans. “This is our land. If they call us ‘monkey’, Indonesia must get out from here,” yelled the crowd.

People incessantly hailed the name of Victor Yeimo asking him to speak. Along with some other activities, he got on the stage. The audience cheered on him. “Papuaaaa?” he screamed over the crowd. “Freedom!” the group replied. He repeated the same yell three times.

In front of the crowd, Yeimo stated that today was a big moment for Papuans. People gathered together for not only about racism against Papuan students in Java, but many factors that accumulated into Papuans’ outrage.

“We are gathering here for not only because we are called ‘monkey’. Moreover, but also justice for our brothers in Nduga who fled to the jungle. We urge the Indonesian government to investigate the human rights violations that had never settled. We ask them to stop exploiting our natural resources and forests!” said Yeimo. Further, he said Papuan people no longer care about infrastructure development because it was not what they asked. “Road constructions have damaged our forest! What about Special Autonomy? Does it give us benefits for the last 19 years running in Papua,” he added.

Then, the Papuan Governor Lukas Enembe got on the stage to express his anxiety on what was happening to Papuan students in East Java. We are not descendants of apes. Therefore, I deeply regret why in Indonesia, which is already 74 years old, there are people still acting small-minded like that. Malaysia is a lot better, though they are from the same root, Malay,” he said.

In addition to his children who are studying overseas, he said his administration sends more than a thousand Papuan students to study abroad. “So, we have dignity. I stated to the Governor of East Java that Papuans love Gus Dur (former president from East Java origin – red) as he loved us. Gus Dur was very protective towards Papuans in East Java. Why did Banser (Ansor Front) not deployed to calm down the mob persecuting Papuan students yesterday?” he questioned.

Moreover, Enembe also released a five-points statement on behalf of the Papuan Government. First, it says that the Provincial Government of Papua expresses its anxiety and concern about the incidents in Surabaya, Semarang and Malang, which caused the arrest of Papuan students by security forces. The provincial government also appreciates the legal enforcement by the security force when it’s done proportionally, professional and fairly. The security forces were expected not to neglect persecution or any vigilant acts either by groups or individuals that potentially hurt the feeling of Papuans. People should avoid doing oppressive actions that can cause casualties, political conflicts and destroy the spirit of nationalism among citizens.

Second, Papua is the territory of the Republic of Indonesia, known as the real miniature of Indonesia. It represents the diversity of Indonesian multi-ethnic, cultures, and religions living in harmony. The indigenous people of Papua welcome and treat non-Papuans with respect and equality. Therefore, we wish that Papuans are treated in the same respect in many parts of Indonesia. This should become our mutual commitment as a nation to create a peaceful Indonesia that politically, economically and culturally safe for everyone.

Third, the Provincial Government of Papua asks all Papuan communities in Papua Province and other provinces in Indonesia to respond to the incidents in Surabaya, Semarang and Malang appropriately without any single act violating the cultural norms and laws.

Four, we expect non-Papuan communities throughout Indonesia to maintain peace and not to conduct unconstitutional acts such as persecution, oppression, racism, discrimination, intolerance and other actions that can harm the feeling of Papuan communities and disturb the tolerance and harmony among citizens. In our 74th anniversary, we should not let the acts of intolerance, racism and discrimination in our country.

Finally, as the Governor of Papua, I invite all governors, regents, and mayors throughout Indonesia to protect Papuan students who studying in their regions, as much as we do to non-Papuan students and communities in our region. This is our mutual effort to prevent a similar incident occurred in the future as well as to maintain our nationalism, unity and togetherness as a nation.

Meanwhile, the General Chairman of the Central KNPB Agus Kossay stated the rally was a manifestation of Papuan peoples’ perception towards the meaning of 74 years of Indonesian independence which they found it useless due to racism. It shows that Papua is not part of Indonesia. They said we were monkeys. And the statement came from military and police culprits. So, lets us get out of Indonesia,” he said.

Further, he continued that they want all Papuan students studying in Java will be guaranteed safe. “If there is no guarantee, a similar incident might be repeated. When it happens, it would be better sending them home,” he said.

People were still gathering in the lawn of the governor’s office until 6 p.m. They were gradually dispersed and going home at around 7 p.m. (*)