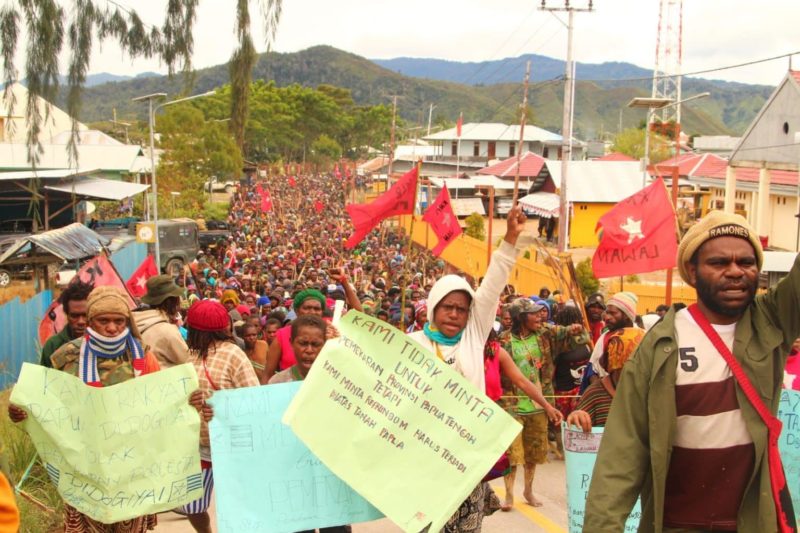 Thousands of people in Dogiyai rally to protest against the plan to create a new province in the regency. Jubi/Abeth You.

Dogiyai, Jubi – Thousands of people in Dogiyai Regency in Papua, united under Papuan People Solidarity, took to the streets on Monday, Feb. 22, to protest against the government’s plan to create a new province and to establish a new police precinct at the regency level.

Before going to the Dogiyai Legislative Council building, the protesters gathered in Mowanemani field to do a waita (war dance) and listened to speeches. Whenever an orator said “Papua!”, the protesters replied “Freedom!”.

They came from 11 districts in the regency and gathered in front of Dogiyai Legislative Council to convey their protests. Among the protesters were civil servants, Dogiyai Customary Council leaders, activists from West Papua National Committee (KNPB), students, customary figures, religious figures, and private company workers.

Rally coordinator, Goo Benny, said both regent Yakobus Dumupa and deputy regent were not present on Monday, so they would rally again to protest against the new province, Central Papua province, when both had returned to Dogiyai. “We will wait for the regent’s return when he finishes his study in Yogyakarta, then we will rally again in a larger number,” he said in a speech before the protesters.

Waves of rejection against the new provinces have emerged in Papua, in which people call the plan as serving only the elites’ interest. More provinces mean more political positions but not necessarily more wealth for the people, they said. Some even call the plan as “genocide” as they predict the new provinces would bring new people, non-Papuans, working as civil servants, police and the military, sidelining native Papuans even further.

The plan emerged after President Joko “Jokowi” Widodo met with 60 representatives of Papuans in the presidential palace in Jakarta. Some Papuans, however, question the selection of the representatives because many think they did not convey Papuans’ real concerns. The “representatives” instead suggesting new provinces to the government, which welcome the idea and followed it up quickly by proposing revisions to the Special Autonomy Law to the House of Representatives.

With the revisions, it would be easier for Jakarta to establish new provinces because the revisions would erase the participation of Papuan People Council (MRP).

Goo said according to the law on the National Police, to have a police precinct at a regency level, the region has to have at least four lower level precincts. Dogiyai only has two district level precincts: Kamuu and Mapia.

“According to article 5 clause 1i [in the national police law], such decision needs the approval of the legislative bodies and the indigenous peoples. Dogiyai people from 79 kampung and 11 districts all rejected [Dogiyai Police precinct]. We call on the people to refuse to sell their land to anyone,” Goo went on.

Human rights and democracy activists and scholars have warned the central government to stop security approach in Papua, because it has led to several alleged human rights violations.

“I would send this rejection to Nabire Police [in Nabire Regency] and will forward this to Jayapura [provincial level precinct],” Ayomi said.

Ayomi said he appreciated the people in Kamuu and Mapia who had created safety among the people. He specifically mentioned KNPB in Dogiyai that sometimes raided illegal liquor sales, which he considered as helping the police to keep the area orderly and safe.

We say ‘don’t make native Papuans suffer’, and they call us separatists: Legislator