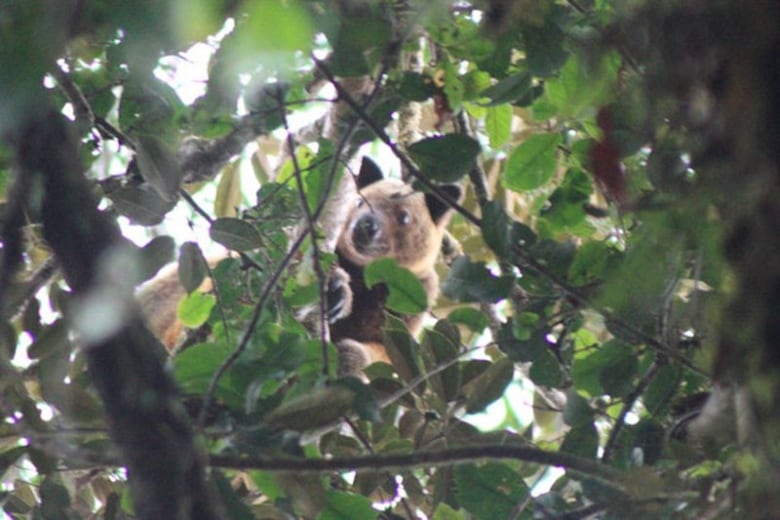 Smith spent 10 days in the mountains of West Papua trying to spot the creature, believed by many to be extinct - Submitted by MIchael Smith

Long thought to be extinct, what is believed to be a Wondiwoi tree kangaroo has been spotted for the first time in 90 years in West Papua, Indonesia – Submitted by Michael Smith

In the summer of 2017, amateur botanist Michael Smith was searching the mountains of West Papua, Indonesia, for a rare type of rhododendron.

But he learned about something even more rare that might be found in the area — the Wondiwoi tree kangaroo.

Smith, from Farnham, U.K., embarked on another trip this summer to try to spot the elusive marsupial; believed by many to be extinct.

“I decided I’d come back for another look, another expedition the next year,” Smith said in an interview with As It Happens host Carol Off.

Smith, along with a guide and local hunter, spent 10 days high in the mountains trying to find it.

They almost gave up. But on their final day, the team finally got a rare glimpse of, and photographed, what is believed to be a Wondiwoi tree kangaroo — the first one seen in 90 years.

“[The local hunter] knew about tree kangaroos, but he’d never seen them before because no one’s actually been quite so high in the mountains,” said Smith, who studied biology in university and now works for a medical communications company.

“It was almost a kind of a legend, even to the local hunters.”

Before going public with his find, he reached out to experts on tree kangaroos, including Mark Eldridge, a marsupial biologist at the Australian Museum, according to National Geographic.

“Knowing [the animal] still exists provides a great opportunity to gather more information, since we know virtually nothing about it, as well as to ensure its survival,” Eldridge told the magazine.

There have been no reported sightings of the Wondiwoi tree kangaroo since 1928, when the first Westerner to spot one, biologist Ernst Mayr, shot and killed it in the mountains of the Wondiwoi Peninsula of West Papua, the Indonesian state on the western half of the island of New Guinea.

He donated the remains to the Natural History Museum in London.

Some have described it as looking like a cross between a monkey and a bear. But Smith likens it more to “a bear you see in the toy shop.”

“It’s got a round, fat face with a bit of a short nose. Couple of short fluffy ears, reddish gold fur. Short stubby arms and legs,” he said.

“[They] have great claws to cling on to the trees… and a tail to kind of hook around the branches as it goes along.”

The Global Wildlife Conservation lists the Wondiwoi tree kangaroo as one of its 25 most-wanted lost species.

Smith said not much is known about the animal because it isn’t easy to find.

The marsupial lives in a tiny, isolated forest in the mountains of West Papua, and not many people head out there. Smith said only he and a few others have managed to brave the conditions.

“It’s hard work. You got sweat beads in your eyes and leeches in your boots and you slip around and it rains all the time,” he said.

“That might have deterred people a little bit, I suppose. It’s no walk in the park.”

Despite the excitement of possibly spotting the first Wondiwoi tree kangaroo in 90 years, Smith said more work still needs to be done to confirm if the animal is what they think it is.

He hopes he can go on another expedition to help collect some tree kangaroo dung and take it away for DNA analysis.

Smith added that he wants to help keep pursuing research on the animal because he feels a special connection to it.

“It’s sort of my responsibility now. You know, I’ve accidentally been the first person to meet with this animal for 90 years,” he said.

“I suppose I’ve just got to try and make sure that the very few tree kangaroos are left to survive for another 90.”(*)

Papua’s forests of 700,000 hectares have been damaged