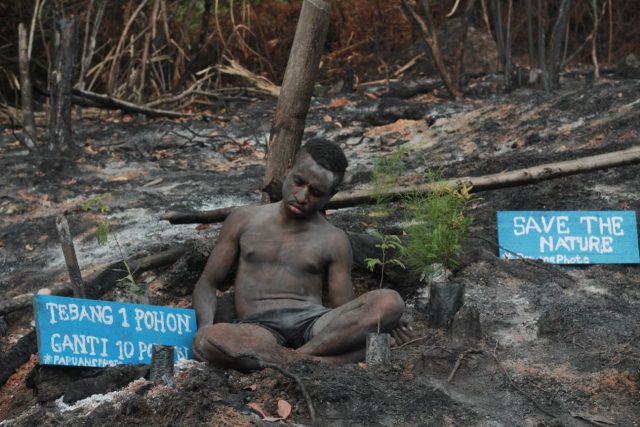 A performance held in the environmental action by Papuansphoto Community on Saturday (8/2/2020). – Jubi/Dok. Whens Tebay

Jayapura, Jubi – Papuan youth from Papuansphoto Community held an environmental action to protect the buffer zone of the Cycloop mountains where precisely located at the rectorate of the University of Cenderawasih.
Around 50 participants joined in the event held on Saturday (8/2/2020) in Waena, Heram Sub-district, Jayapura City. They planted trees and took photos of the natural surroundings.

The Papuansphoto General Chairman Whens Tebay told Jubi on Sunday (9/2/2020) that this action was to demonstrate their concern for the Cycloop area.

“Our concept of photography is to save the forest and humans. So, it was two activities in one event. We planted 50 various tree seedlings,” said Tebay.

The various tree seedlings which brought from the Papua Provincial Forestry Office are the banyan, pine, acacia and weki.

“This is the first event in 2020. There would be more events such as training or workshop on photography to be held in Jayapura,” he said.

Furthermore, Tebay who obtained his bachelor degree from the International Relations of Science and Technology University of Jayapura (USTJ) warned the city and suburb residents of Jayapura to protect their environment, especially Cycloop Mountains as a water source for dwellers living in both areas.

Earlier, Tebay said Papuansphoto had conducted a similar project titled “Save Water, Forest and the Land” on 1 February 2019. At that time, the community worked with native Papuans and Elenggen Art studio.

In the meantime, Gamel from Rumah Bakau Community thinks the concept of event held by Papuansphoto was creatively interesting because they were not only planting trees but turning such activity to be the artwork of photography.

According to him, for those who do not really like reading, have little interest in literacy, the photography at least can bring the actual pictures contained environmental messages.

“While our community has started the environmental action since 1 January 2020 by collecting rubbish leftover from the New Year’s Eve and run some ‘goes-to-school’ events related to environmental issues. The motivation of young people must always be maintained and never stop to try,” he said.

Jayapura City is located in the Cycloop mountainous area and often hit by floods and landslides during the rainy season. It is also said the water flow rate in the Cycloop buffer zone continuously declined.

While, on the other hand, waste and rubbish scatter everywhere and deforestation by irresponsible people has been continuously happening. As a result, the water surface at Kampwolker River, for example, has gradually dropped.

In Perumnas 2 (Waena), PDAM water supplies not operated for three days. Residents must buy some water at the nearest water depot for daily consumption, such as for washing and cooking.

“In the past, water from PDAM was available for 24 hours. Now, it changes drastically,” he said. Therefore, he asks everyone to protect the Cycloop area as the water source area. (*)