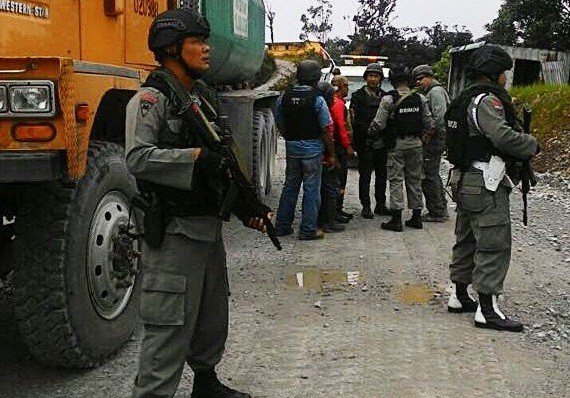 Asmat, Jubi – The shooting incident in PT Freeport Indonesia area that killed a member of Brimob, is feared to affect the process of divesting the shares by the Papua provincial government.

Divestment of shares is the reduction of several types of assets in form of financial and goods of business owned by the company.

“I hope that in the future there will be no more disturbances such as the shooting in the Freeport area,” said Papua Governor Lukas Enembe, through a press release received by Jubi, in Jayapura on Tuesday (October 24).

In the process of negotiation there should be no chaos, including the shooting incident as it happened.

“I called the shootings to stop in Timika because it will interfere PT Freeport Indonesia’s activities, for anyone who does it,” Enembe added.

He emphasized that the security problem at PT Freepport Indonesia mine is a security responsibility.

Governor Enembe also asked for the arm group who start the shootings to be pursued.(tabloidjubi.com/Zely)

One Person Shot by Unknown Gunman in Keerom

Papuan women pray together first day of 16 Days of Activism

Everyone Stakeholders Should be Open-Minded on Otsus Plus, says Regional Secretary