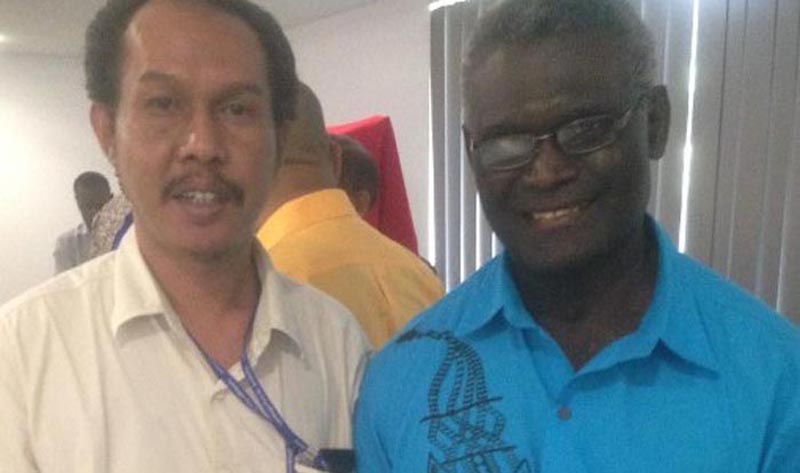 Jayapura, Jubi – West Papua and its peope are part of the Melanesia and Pacific. Therefore it is relevant for the nation of Melanesia to speak up through the Melanesia Spearhead Group and Pacific countries, Prime Minister of Solomon Islands Manasseh Sogavare said last week.

His statement told on the sidelines of the Pacific Islands Forum (PIF)reconfirmed the former statement made by the special envoy of the Solomon Islands for West Papua issue, Matius Wale, after a ministerial on Wednesday evening.
“The Solomon Islands will raise the issue of West Papua in the 46th meeting of Pacific Islands Forum in the retreat of Pacific countries leaders,” Wale said to reporters on last week during PIF.

Wale, in his statement, affirmed the participation of the Solomon Islands in PIF this year has three resolutions for West Papua issue.
“Our first resolution is to support the application of the United Liberation Movement of West Papua (ULMWP) to be an observer in PIF, the second is to urge the PIF leaders to support a resolution proclaiming the UN Secretary General to do assessment on the human right condition in West Papua as well as to call the UN Decolonization Committee to resume the West Papua in their list of decolonization,” said Wale.

After the leaders meeting, Sogavare confirmed the West Papua issue is very relevant in PIF, although it’s not easy for him to ask the Pacific leaders to be aware that this is the right time to talk about West Papua. “Public opinion has been formed and many information about West Papua have been conveyed to us. This leaders forum has moral obligation in handling the issue of West Papua in a responsible manner,” Sogavare said.

He also denied the statement made by the Indonesian Deputy Minister of Foreign Affairs Abdurrahman Mohamed Fachir mentioning that PIF is not a right place to talk about West Papua issue. According to him, the current PIF is to discuss about the economic development partnership, the issues of climate change, fisheries and Information, Communication and Technology in Pacific.
“West Papua is not a recent issue. It stood with us before we obtained the independence. We will fight for our brother, the nation of West Papua, to be an observer in MSG (Melanesia Spearhead Groups). We’ll do the same in PIF,” he said.

Bringing the issue of West Papua in the Pacific Islands Forum, he further said, is not something outside of PIF mandate. And the Solomon Islands recognized the Indonesian sovereignty over West Papua. But the sovereignty of a State is not an excuse for doing repression and human right violation.
“Our membership in United Nations indicated our recognition to Indonesian Sovereignty over West Papua. Similar with the United Nations who recognize the rights of a nation on self-determination and human right violation,” Sogavare said.

In his point of view as leader, if UN member States commit human right violations against their own people, it is no more their domestic problem, because every UN member States have obligation to question the capacity of their membership in the UN.

However, he did not deny that his decision has affected to relation between the Solomon Islands and Indonesia. But he considers his country and people are now being tested on their commitment for West Papua. “They (Indonesia) has said their disappointment and we explained to them that we have good intention in connection with the Pacific Islands Forum and MSG. We actively consulted with Indonesia,” he said.

He also appreciates Papua New Guinea’s choice to opposite his country on the issue of West Papua. Sogavare said the Papua New Guinea should think about the interests of its people who share the borderland with Indonesia. But, Papua New Guinea absolutely has right to do so,” he said.
“Indonesia shouldn’t agree with our position and decision, but we keep consult with them and explain that our decision is right on our side. And we will keep move forward for our goal,” stated Sogavare.

Supports from his people made him strong against Fiji and Papua New Guinea to accept ULMWP as observer in MSG. (Victor Mambor/rom)

Legislator: Do Not Slander People as OPM