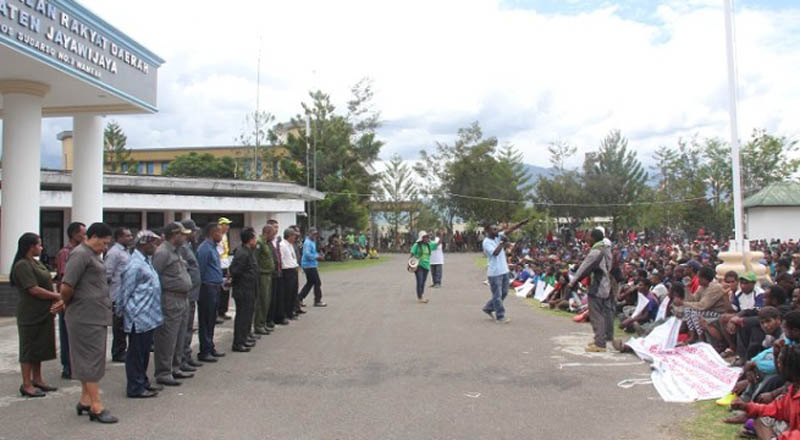 Jayapura, Jubi – At least 100 Jayawijaya students and youths in Jayapura Municipality held a peaceful rally in front of the Papua Parliament Office on Tuesday (3/11/2015) to protest the increase in fuel prices which they said have triggered a spike in the prices of basic commodities over the last few weeks.

“We suspect the stakeholders in Jayawijaya were involved in this problem. The stakeholders and political elites in Jayawijaya are currently tried to people systematically. The government is ignorant. The fuel price is increased and it affects the prices of basic commodities. People can no longer to cultivate due to the drought, and now the fuel price is increased,” he said.

Other protester Wempi Asso said the students asked the Papua Parliament to immediately follow up this situation. Currently people in Jayawijaya are deserted. “Poor people, they are already poor and now the fuel price is rising. We are concerned about it. Because this increment certainly affects the prices of basic commodities. Public transportation cost is increased while Papuan women should go to the market for selling in order to support their children’s education. Have Papua legislators heard about it?” said Asso.

The members of Commission III and Commission II of the Papua Legislative Council, Yan Ayomi and Nikius Bugiannge, met the protesters to listen their aspirations. To the protesters, Ayomi said their aspirations are valuable since it encompasses the life sustainability of Papuans in Jayawijaya. He also apologized to the crowd because the parliament’s chairman and board members are currently taking an official mission and travel to other regions.

“We will forward your aspiration to the Chairman and relevant commission to be discuss in the Consultative Body to determine the next steps taken by Papua Parliament in the near future,” Ayomi said.

The protesters dispersed after expressing their aspirations and hearing with the legislators. (Arjuna Pademme/rom)

Mining Activity in Tembagapura to Continue Even Without Freeport : Minister Sudirman Said