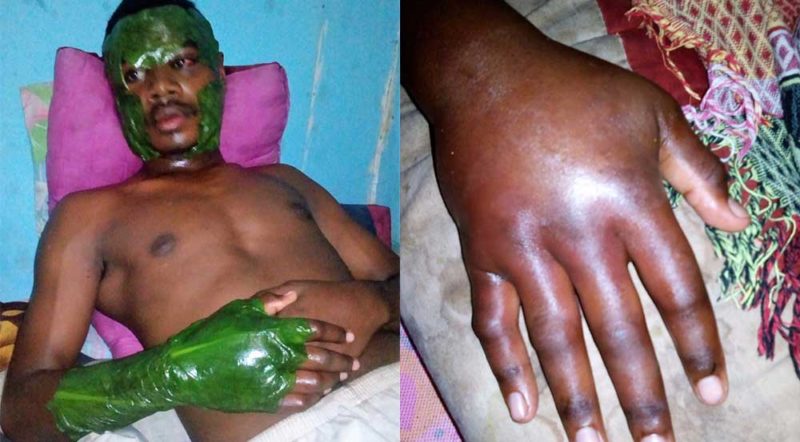 Yunus while getting treatment at his home. He was suspected to had broken fingers - Doc. Jubi

Yunus while getting treatment at his home. He was suspected to had broken fingers – Doc. Jubi

Jayapura, Jubi – A student of Class X, SMUN 01 Wondama, West Papua named Yunus Manaruri was beaten by a number of police officers to faint. This incident occurred on October 11, 2017 when Yunus was about to leave for school.

From the chronology collected, Yunus was driving two-wheeled motorcycle from Rado to school. In the middle of the street he saw the Traffic Police (Polantas) and had intention to return home. But he changed his mind and kept going to school.

When he got to the front of the road leading to his school, a Polantas arrested him and checked. Yunus identified the head of traffic police Wondama Bay who arrested him and asked for his driver’s license and vehicle registration.

Since there was no driver’s license and vehicle registration, the police removed the motorcycle keys.

Yunus says that it’s his sister’s bike and asks for the key again since there’s a cabinet lock on the bike seat he’s using. The police returned the motorcycle keys to Yunus. But Yunus instead turn on the bike, and try to keep going to school.

But the back of the motor was detained by the police, Yunus confessed to falling into the trench. He then stood up from the trench and punched the policeman on his mouth. A number of other policemen who were on the scene did not accept his colleague was beaten. They then pushed Yunus into one of the new kiosk buildings and beat him to unconscious.

When Yunus regained consciousness, he was ordered to get into the car to the Wondama Bay Police Station in Isei (Rasiei District). On the way, Police officers hit his face in the car and photographed him with mobil phone.

Frangky Samperente, an environmental activist who is often accompanies the community in Wondama Bay, told Jubi that after getting out of the car and arriving at the police station, the guard police still beat Yunus.

“Suddenly came an officer then hit him twice in the head. The officer used the agate ring to cause Yunus forehead to bump,” said Frangky.

Frangky continued that the police also frightened and threatened Yunus by saying that he would be taken to the firing range and fire him. Yunus was also asked to raise his hand to be cut using a bayonet.

The victim also suffered torture while detained. The police ordered him to pick up a broom handle from a metal pipe, and then hit him with the handle. The other police told Yunus to sit close to the cell door, then kick his jaw with his shoes.

“Yunus still feels ill. He was tortured, hit with water hoses until his hands were swollen, besides being told to push up and jumping jack in the cell,” said Frangky.

According to Frangky, at this time, Yunus felt pain throughout the body, waist, eyes swelling, hearing loss, broken lips bleeding, nose swelling and difficulty of breathing.

“He has trouble sleeping and eating because of his throat and jaw pain,” explained Frangky.

After being detained for two days, Yunus was sent home by a policeman. The family then took him to ER at Wondama Bay Hospital.

On October 19, the Teluk Wondama Resort Police Department took Yunus to the hospital for examination. According to his brother who is also a health officer, Yunus will be reconciled to Manokwari, because there are indications that the finger bone is allegedly cracked.

Kapolres Teluk Wondama, AKBP. Drs Frits Sokoy when confirmed by Jubi, expressed his apologies for Yunus’s incident. He confessed when the incident he was on a business trip outside Wondama Bay and could not explain what exactly happened.

“We on behalf of personal, family and police greatly apologize about this incident. We will deal with this issue by taking information from members of the field, the community and Yunus’s parents themselves. This is our responsibility and risk as the leader,” explained Police Chief Sokoy. (tabloidjubi.com/Zely)

Women are asked to report violence

Legislator: 10 percent of Freeport shares to Papua is a ‘political bribe’