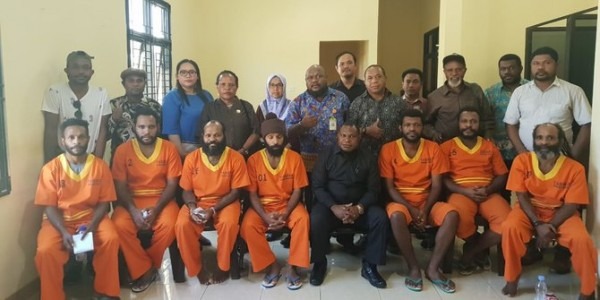 Seven Papuan political prisoners in Balikpapan taking a picture with a representative of Papuan People’s Assembly and their legal counsel team. – Jubi/SPC

Jayapura, Jubi – The rights of freedom of expression in the second administration period of President Joko Widodo have still in concern to human rights activists. Democracy index 2019 released by Economist Intelligence Unit (EIU) put the democracy in Indonesia is the category of flawed democracy with index 6.48.

“One of the factors contributing to this low rate index is control and repressive acts such as the restriction over freedom of assembly and expression. The restriction of civil movements including student’s rally, criminalization against activists, farmers and students to restriction on freedom of expression on political free choice of indigenous Papuans,” said the Deputy Director of ELSAM (Institute of Human Rights Studies and Advocacy) Andi Muttaqien in a release received by Jubi on Saturday (8/2/2020).

According to him, the restriction against the freedom of political expression of indigenous Papuans has raised an assumption that the Government of Indonesia had been placing Papuans as “the second-class citizen” who has no rights to express their political view and opinion.

“The human rights issue and conflict in Papua has endured for decades and never been solved until today. The central government seems to neglect indigenous Papuans to be minorities and marginalized in their own land. The security forces have acted repressively to any forms of the political expression of indigenous Papuans by giving them a stigma as a separatist,” he said.

Based on monitoring and documentation conducted by ELSHAM in the second quarter (August-December) of 2019, the criminalization against the Papuan political activists has increased drastically. The security forces have massively seized Papuans on many occasions. These acts have mostly ended in the arrestation and detention of Papuans.

ELSHAM’s data showed that as per 28 January 2020, there are 100 Papuan political prisoners behind bars.
Earlier, Papuan Behind Bars confirmed 26 political prisoners detained in Papua in 2018, consisted of 25 indigenous Papuans and a journalist of Poland national Jakob Skrzypski. But, the number of political prisoners in 2019 has sharply increased to 77 new prisoners who arrested in civil demonstrations during August and September 2019. The increase happened concerning the incident of racist taunts towards Papuan students on Monday, 16 August 2019.

There are also some cases against Papuan political activists which seized public attention. It includes the case against Septi Meidogda (Gempar Papua Chairman) arrested in Manokwari on 18 September 2019 and charged with Information (ITE) Law by accusing him to provoke the public on Facebook dated 17 September 2019.

Then, the case of Mispo Gwijangge who accused to murder 30 construction workers in Nduga on 2 December 2018. There are flawed aspects related to his arrest, such as he does not understand Indonesian and only speak his local dialect. Mispo is illiterate. He cannot write, read and count nor able to specify the day or date. He does not know his date of birth and his age. During the investigation, he even did not understand any questions posed by the police officers.

Next, the case involved six political prisoners Surya Anta, Charles Kossay, Dano Tabuni, Issay Wenda, Ambrosius Mulait and Ariana Elopere who currently detained at Salemba prison, Jakarta for treason because of raising the Morning Star in front of the Presidential Palace on 28 August 2019. The police arrested them two days after the rally. Currently, most political prisoners are undergoing the trial at court. However, some prisoners are now in home-detention, while others are still in prison.

“The use of treason article and ITE Law against Papuan political prisoners are exaggerated and not necessary. Therefore, each person who considered doing the treason act and brought to court should be released,” he said.

ELSHAM considers that the restriction to the rights of freedom of expression imposed by the treason article has gone beyond the International Covenant on Civil and Political Rights, which ratified by the Indonesian Government. The detention against citizens by state because of their political view also considered violating the rights to freedom of expression and opinion in which protected by Article 28 of the 1945 Constitution and other laws.

“President Jokowi should instruct the Attorney General to immediately stop or withdraw all charges against defendants and or Papuan political prisoners who accused with treason and ITE articles,” he said.
ELSHAM also asked the Indonesian Police Chief to order his staff to use a dialogical approach and stop all forms of discrimination against Papuan activists. (*)