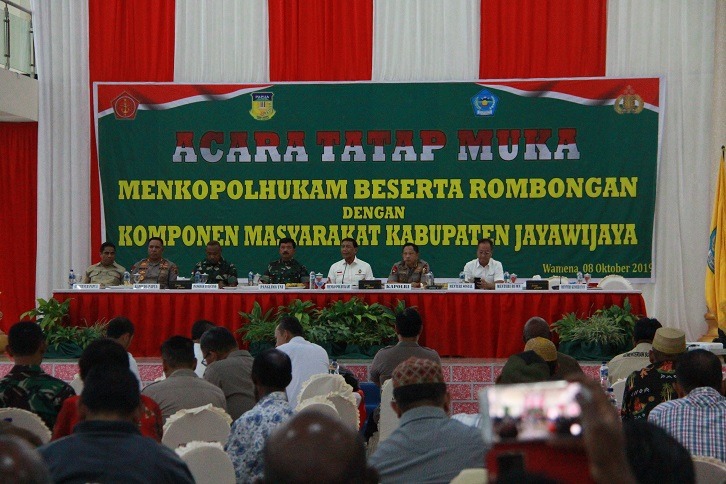 The meeting between the Minister of Politics, Law and Security, Military Commander and National Police Chief with hundreds of community and traditional leaders held in the Aithousa Meeting Hall of the GKI Church considered disappointment, Wamena. – Jubi / Islami.

But what people want right now is to embroider the already-torn apart social relationship, to heal the wounds promptly. On the other hand, the government has many things to do if they want to rebuild a robust peace in society. The article is the last part of six articles of “Risking peace in Wamena”.

Please not risking peace in Wamena

The Rev. Titus Tangke looked grim on that Tuesday, 8 October 2019. He didn’t expect the commission led by the Politics, Law and Security Minister Wiranto, National Police Chief General Tito Karnavian and Military Commander Marshal Hadi Tjajanto rushed to leave Wamena. They just left hundreds of religious and traditional leaders and dozens of district chiefs who were waiting for two hours in the meeting hall of the Aithousa Church of GKI behind.

Full of hope, he came to the meeting hall. He brought several brown envelopes containing the incident report of 23 September 2019 that he wanted to give to the commission. But more than that, he wanted to see a dialogue between the commission and hundreds of religious and community leaders at the Aithousa Building. He imagined the same pleasant atmosphere of the discussion held at Jayawijaya Military District Headquarters would happen for the second time in this place.

Unfortunately, the commission had not much time. After speaking for about half an hour, Wiranto only asked two or three attendees to respond to his presentation. “Dialogue? I have done it with refugees,” said Wiranto to hundreds of traditional leaders in the building.

Titus Langke said he was sad seeing the commission had to leave immediately. “Many people wanted to talk. Of the four major ethnic representatives, only one had a chance to speak, that was South Sulawesi Association representative. While representatives from Batak, Padang, had no opportunity to talk due to time limit. [Even the one who spoke] only had five minutes to talk. How could he tell more in five minutes? said the Rev Langke, who’s the administrator of Spiritual division of South Sulawesi Association.

However, he luckily managed to give one of his brown envelopes to Wiranto’s contingent. There is only a large brown enveloped left in his hand that already looked worn. “This is the documentation of the victims of 23 September fire incident from the association. I already gave one to the commission to forward to Mr President,” he said in a trembling voice holding in his emotions.

Suddenly, the loud voice of human rights activists Theo Hesegem was on the air. The Rev. Titus Tangke quieted trying to understand Theo, who emotionally criticised the commission. “Issues in Wamena are very complex. Here, we are cautious [to speak], because the victims are coming from the three groups of civilians and government: non-Papuans, indigenous Papuans and local government. But, this dialogue (involving traditional leaders) must occur,” said Hesegem in the yard of the Aithousa building.

He also stressed that in principle indigenous Papuans also require disclosure of the facts and truths of the 23 September incident for the sake of reconciliation process. According to him, the most critical part of this disclosures is finding the perpetrators and intellectual actors behind the mass riot in Wamena.

Meanwhile, Father Allo Dabi said the police could not just offer one-sided conclusion then asking the public to believe and want to start reconciliation.

“First, the police unilaterally stated the alleged racism was a hoax. Shouldn’t it the court to decide? Second, the police pointed the West Papua National Committee behind the mass riot without providing evidence to prove their conclusion to the public. If the police kept making the one-sided conclusion, it would increasingly create untrust amongst the public. They are hard to believe the police,” said Father Allo. 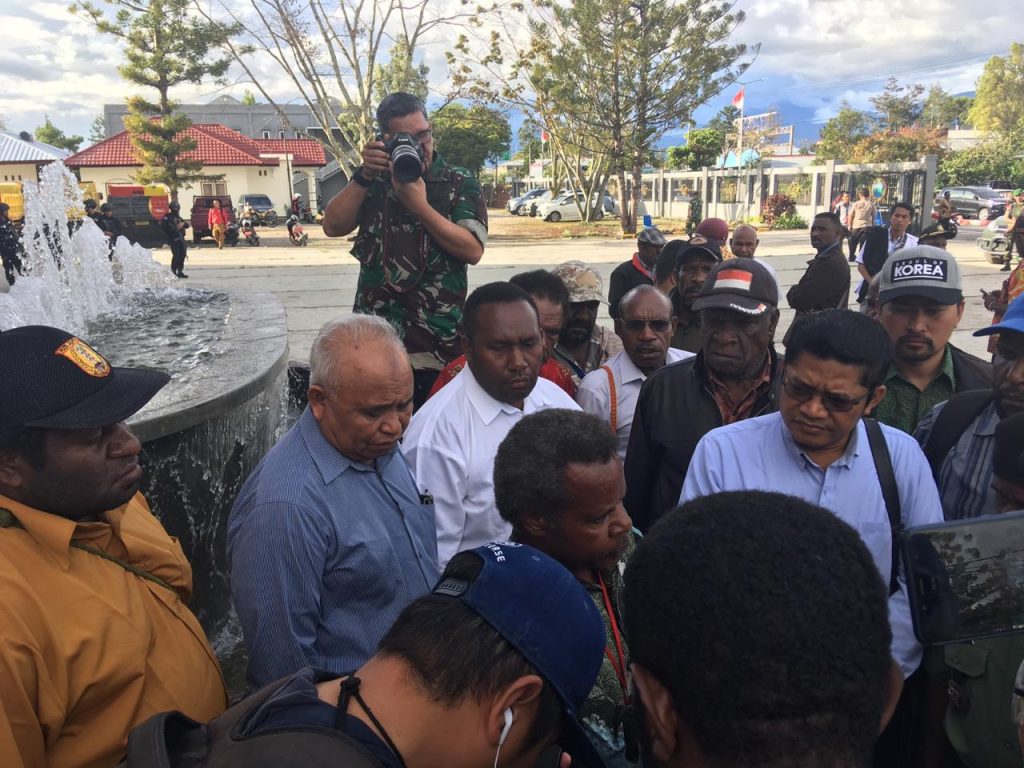 Theo Hesegem expressed his criticism toward the work of government in handling the incident of 23 September in Wamena – Jubi / Aryo Wisanggeni.

Moreover, Theo Hesegem wants all people in Wamena to make peace quickly. But he doesn’t want the peace agreement collapsed because of the “new fact” that will come later. He encourages all stakeholders to continue to meet and have a dialogue but emphasises to discontinue such ceremonial meeting arranged by the government.

“Stop the ceremonial dialogue. It is better for the government to immediately form a fact-finding team that involving all parties, both migrants and indigenous Papuans, community leaders, religious leaders, government officials and security forces as well. This team must reveal all the facts and truths that occurred during the Wamena mass riot and write a report that can be perceived by all parties. If all the facts have revealed, we will have a solid ground for reconciliation,” said Theo Hesegem, hoping.

Everyone indeed wants to rebuild their social relations that were torn by the riot. But, we need a strong weaving to unite, not haphazard one that will create a new wound amongst stakeholders. It requires the presence of mind of all parties in order not to let the peace in Wamena fragile and risky. (*)