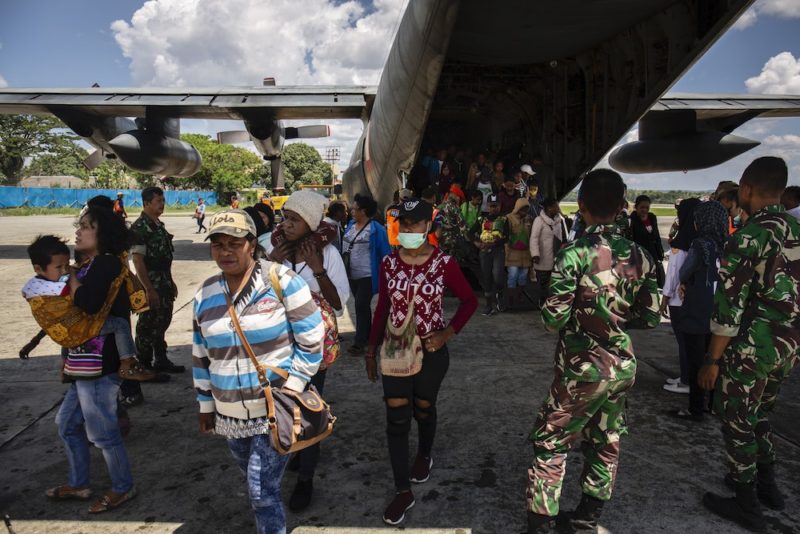 Refugees of Wamena riot flew to Jayapura by Hercules of Indonesian Airforce before returning to their hometowns. – Jubi/Vembri Waluyas Refugees of Wamena riot flew to Jayapura by Hercules of Indonesian Airforce before returning to their hometowns. – Jubi/Vembri Waluyas

But what people want right now is to embroider the already-torn apart social relationship, to heal the wounds promptly. On the other hand, the government has many things to do if they want to rebuild a robust peace in society. This is the fourth part of six articles of “Risking peace in Wamena.”

The day after the riot in Wamena, National Police Chief General Tito Karnavian gave a press statement broadcasted on several national television channels. Tito said student demonstration in Wamena was triggered by a teacher calling her student ‘monkey’. Further, Tito stated the mass riot in Wamena started from around 07.30 am to 3.pm local time.

“The mob…anarchists, some were throwing stones at shops nearby, especially owned by migrants…some shops were also burned…Until today (Tuesday, 24 September 2014) at 12 pm, twenty-six people died. Of these 26 victims, please take note, twenty-two are migrants. They died by stab wound and trapped in houses or shop during the fire. Then the other four victims are indigenous Papuans. Meanwhile, sixty-six others were injured,” said Tito in a press conference conducted in Jakarta, 24 September 2019.

After an update, the official police record said 33 people had died in Wamena riot. Twenty-five is “Papuan migrants”, while eight are “indigenous Papuans”. However, in separate research, Jubi discovered the number of dead victims in the riot is 42 people.

The mass riot in Wamena eventually harmed everyone’s humanity. Public shocked hearing many people died in their burning house or shop that was surrounded by the mob. This violent incident has lived thousands of migrants with trauma, which made them panic to get a flight seat to live Wamena.

When met in Jayapura on 1 October, Papua Governor Lukas Enembe declined this accusation. “This is not a conflict between Baliem Valley’s people with the migrants. Even, there is a student who Baliem Valley native got burned after refusing to join the mob, whereas two other students tortured, and they are also indigenous Papuans. This incident is not a conflict between indigenous and migrants,” said Enembe.

On the other side, there are many indigenous Papuans who save the migrants. “It was Baliem Valley natives who eventually save many migrants during the incident,” said Enembe.

The Rev. Simet Yikwa, a priest of Papuan Baptist Church (PGBP), for example, mobilised church officials to evacuate the migrants who mostly are the owners of the shops, car repair shops or stalls in Homhom and Pikhe streets. Other priests from Panorama Baptist Church and Kibaid Church also did the same. Natives in Homhom have evacuated at least 700 migrants.

Around two kilometres from the northern of Yikwa’s church, Obeth Mabel also saw many strangers run away in all direction and acted anarchy. When he saw the anarchy mob tried to burn a house at the t-section of Mikael Alua Street, Mabel and residents were determined to evacuate the migrants from their homes and shops in Pikhe Street.

They took the shop owners in the houses of natives to hide. “About 58 households. [They are] from different ethnicities, Batak, Enrekang. We took them along with their wives and children to our houses [natives. Some of them are my truck drivers. We finally dropped them to Wamena because the situation was uncertain,” said Mabel.

Meanwhile, at Pasar Misi, the traditional market in Wouma, the location where most death victims found, Robert Surabut and his three neighbours covered dozens of traders in their houses. “We took them to our houses. The outraged mob had arrived in front of the Pasar Misi housings, asked us where the traders from Pasar Misi were going? We said, ‘don’t know’.”

The police could handle the situation in Wamena after 4 pm. Both police and army were able to pick up the migrants who were being hidden by Yikwa, Mabel, Surabut and other natives.

The story of natives rescuing the migrants made the public outside Papua to be more careful in digesting the dichotomous narrative of “Papuan migrants” and “indigenous Papuans”. However, most indigenous Papuans are fear to be blamed. They decided to leave Wamena towards the remote mountains.

Meanwhile, Jayawijaya Regent John Richard Banua admitted to receiving information about indigenous Papuans who left the town. “We received reports from several sub-district heads about people from Lanny Jaya, Nduga, Yalimo, Tolikara who previously lived in the central of Wamena town have moved to nearest sub-district in Walelagama, Kurulu,” said Banua on 2 October 2019 in Wamena. 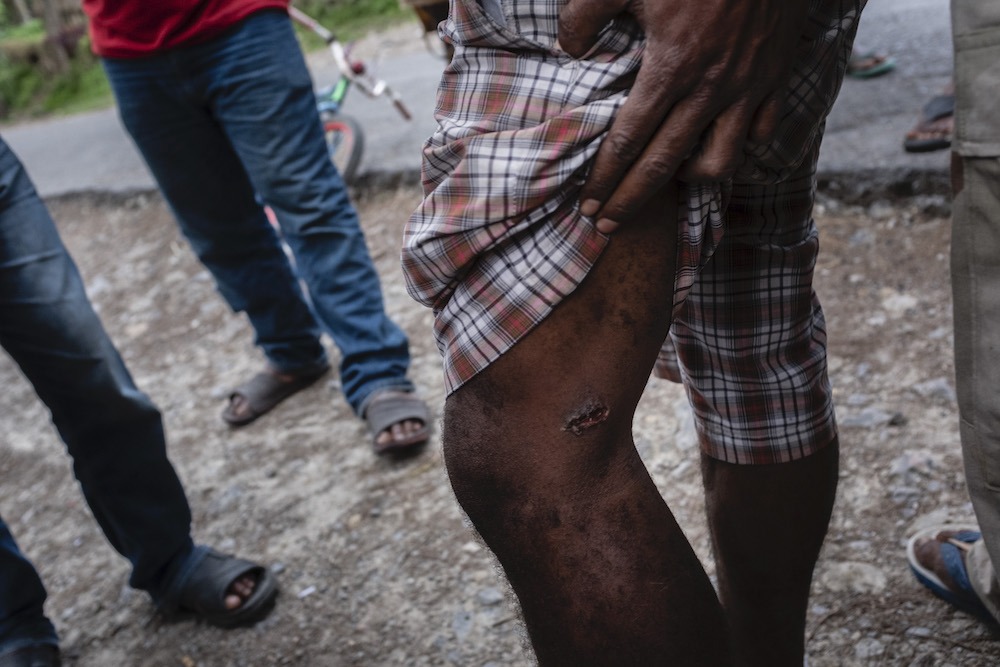 6, 662 of formerly Wamena residents from Lanny Jaya had fled to the outskirt because of terrifying hearing rumour about security forces will seize and arrest indigenous Papuans who suspected involved in the riot on 23 September. “They fled to 43 location in Wamena outskirts, and 23 Papua Baptist churches,” said Sohilait on 8 October.

Meanwhile, Father Ivan Simomora OFMCap of St. Fransiskus Asisi Parish in Musatfak said there were thousands of Papuan natives walked across Musatfak on 24 to 25 September from Wamena. “Since 24 September, I saw some women and children walked in Musatfak carrying pots, cauldrons, wearing modest clothing to leave Wamena. The road was full; it was like an exodus,” said Father Ivan.

Among the refugees, he met a man whose leg wounded by a gunshot. “He kept his name a secret. The bullet was still in his leg. He refused to take to Jayawijaya Public Hospital in Wamena. He just gave the man antibiotics because his wound already swollen. He also found another man with burn injury and also refused to go to the hospital. They lived only for a night in Musatfak, then going somewhere,” said Father Ivan.

Based on the ground research, Jubi discovered the fact that 42 people died in Wamena riot. This number is higher than the police data, which recorded 33 death victims. To Jubi, Father Ivan Simamora predicted the number of Papuans who killed or wounded might increase, given indigenous Papuan are often fear to report deaths or injuries in an incident like the mass riot in Wamena.

“The problem is repeatedly the same. If indigenous Papuans injure in the conflict, they are always scared to go to the hospital. If someone dies in a conflict, their family are also afraid to make a report. They are afraid of being arrested or blamed,” said Father Ivan. (To be continued)