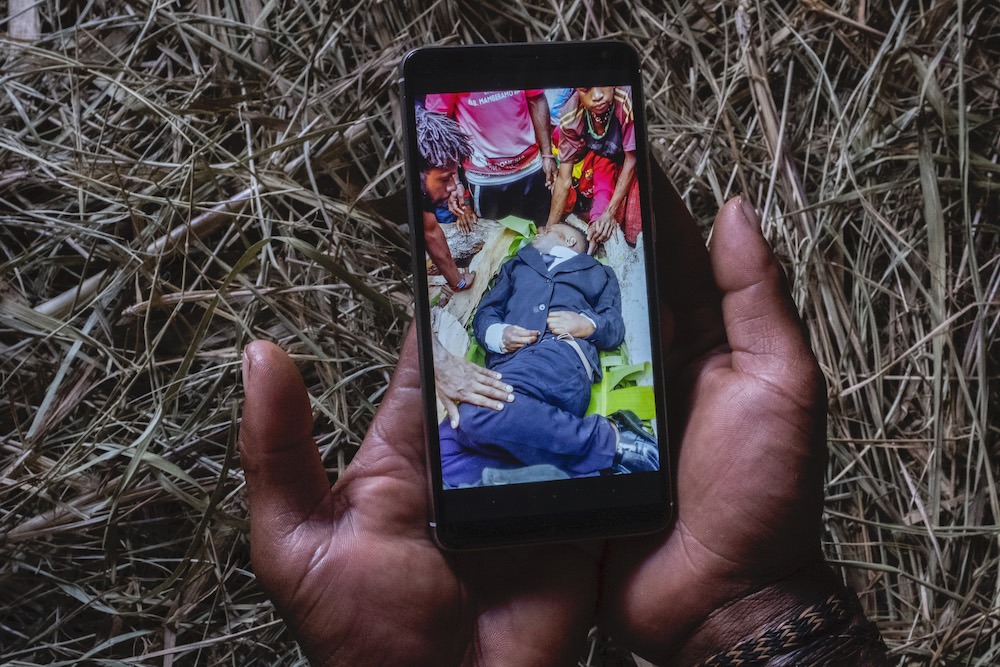 But what people want right now is to embroider the already-torn apart social relationship, to heal the wounds promptly. On the other hand, the government has many things to do if they want to rebuild a robust peace in society. The article is the third part of six articles of “Risking peace in Wamena”.

Mass outraged in the downtown

Every single minute passed in silence at the lawn of the Jayawijaya regent office. A TVRI journalist Naftali Pawika risked for taking a picture of protesters in the yard because some students had warned anyone for not taking their photographs or videos during the protest.

“So I could only sit down at the back. To every journalist who later came, I told them for not taking their picture because they might be angry,” said Naftali Pawika.

Those students also refused the security forces. When a group of Mobile Brigade personnel stopped at Yos Sudarso Street caught by the students, they run out of the regent office’s compound, throwing stones and asking the Brimob personnel to go away. When the troops left, the students turned calm. They quietly sat and waited for the Regent Jhon Richard Banua.

“They didn’t want to see the security forces after hearing their seven friends arrested by police. They were waiting for the regent because they wanted him to release their friends,” said Pawika.

Meanwhile, the human rights activist Theo Hesegem said the Regent Jhon Richard Banua arrived at his office along with Lieutenant Colonel Infantry Candra Dianto, the Military District Commandant of 1702/Jayawijaya. Before the regent had a chance talking with the students, a military adjutant took a shot of the students.

“It made the students mad. They were throwing stones towards the regent and military commandant. The commandant finally left the compound through the back door,” said Hesegem in Wamena on 5 October 2019.

“The regent who took shelter to escape the stones throwing came out to calm down the students. Everything was under control after the regent promised to take care of their friends arrested by police. The students then sat peacefully until a fire brigade car entered the compound to help to extinguish the fire in the finance department,” said Naftali Pawika.

Suddenly, they became angry and chased that car to the back office’s compound. At the same time, there was another group entered the office compound through the back door. “They are adults. They joined the students’ crowd. The situation was getting chaotic. Finally, other buildings in the regent office compound also burned,” said Naftali Pawika.

The outraged mass came out from the regent office compound to the street. They marched through SMP 2 Wamena in Diponegoro Street and tried to penetrate the Wamena Airport in Trikora Street. At the t-section of Diponegoro and Trikora streets, the police shot the tear gas to dismiss the crowd.

Blocked by police, the mob moved back and turned into Ahmad Yani Street. They then turned towards the orphanage Panti Asuhan Pelangi and walked approaching Trikora Street. Many witnesses believe that the mob eventually wanted to burn the Wamena Airport. The police once again confronted the crowd with tear gas shots. Gunfire continuously shot to scatter the mob. They run away to all direction, mainly towards Pasar Misi in Wouma.

Meanwhile, Father RD Allo Dabi Pr who was in the Central Highland Diocese Office in Wouma heard the gunfire since 09 a.m. Many innocent people were panic and run away in all direction. Many Catholics came and refuged to the diocese office.

“At 10.30 p.m., the situation was getting tenser. The traditional market, Pasar Misi, burned out. When the Brimob arrived at Pasar Misi, the fire had spread to other locations. When the students saw the Brimob opened gunfire, instead of fear, they attacked the Brimob,” said Father Allo. 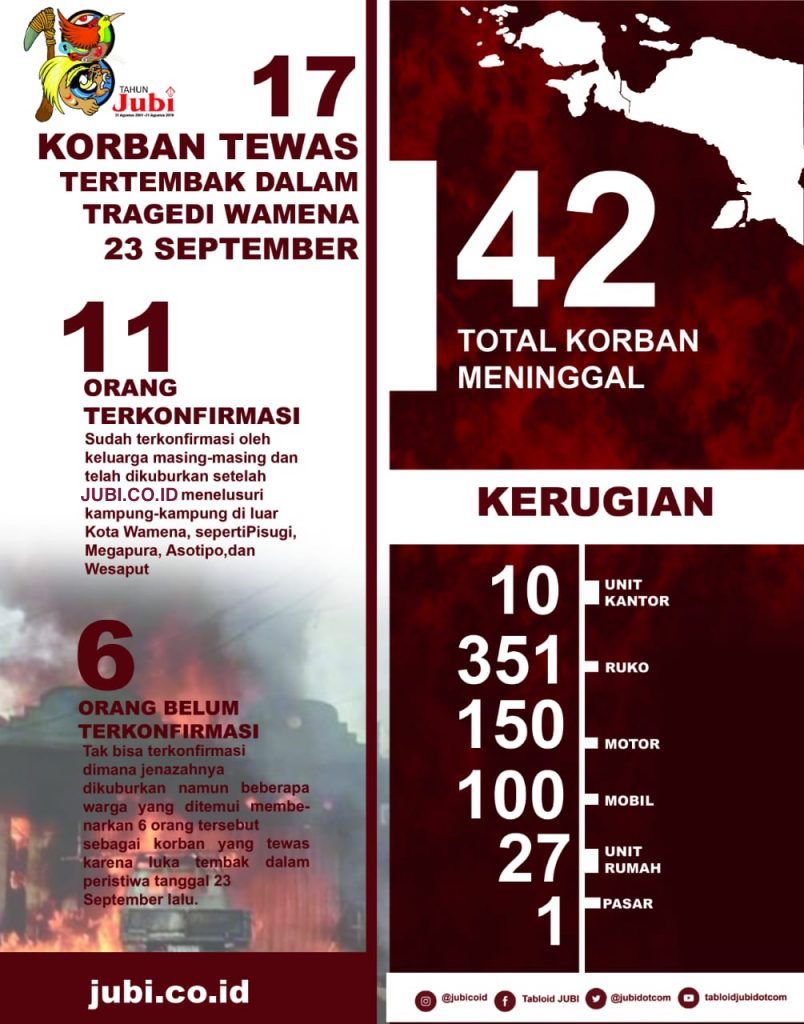 At the same time, the outraged mass due to a shooting incident in Homhom started to come to Wouma. “Three adults carrying traditional bow and arrows entered to the diocese office’s yard. It seems they wanted to go to Pasar Misi. I asked them to go because they would harm people who took refuge here. Thank God they left. A few moments later, the police came. I raised my hand, and they asked me, ‘a priest?’ I answered, yes, I am a priest, then they went away,” said Father Allo.

Meanwhile, in Pasar Misi, the tension amongst the outraged mass that repelled by police was getting worst. They took the retail gasoline in bottle displayed in front of the stall, used it to burn any shops and stalls there. Some traders trapped inside their shops or stalls. The riot in Pasar Misi, Wouma, on 23 September 2013 took the most casualties. Father Allo said the tense gradually decreased at 3.00 p.m.

The official police data said the mass riot in Homhom and Wouma on 23 September 2019 had killed 33 people, caused 80 injuries and traumatised thousands of people. Meanwhile, dozens of thousands of people from Wamena and surrounding areas refuged to some refugee camps or left Wamena. In Wamena, some offices reportedly burned, while 351 shops and 27 houses also demolished by fire.

Some Jubi sources confirmed that seven of 33 death victims from the police’s record killed by bullets during the mass riot on 23 September 2019. The victims are Eliaken Wetapo, Gestanus Hisage, Ketron Kogoya, Manu Meage, Mison Lokbere, Yus Asso, Eles Himan. Jubi also received information about another victim, Marius Wenda, who also killed by the bullet. However, this information has not yet verified.

Meanwhile, the Chairman of Papua Customary Council elected in the Extraordinary Congress noted that there are eight other death victims but not yet recorded by police. They are Kelion Tabuni, Niligi Wenda, Lawan Hesegem, Beam Wenda, Inius Tabuni, Naligin Yikwa, Wenas Babingga, Yandrik Wenda. The council stated that these eight victims died because of the bullets.

Jubi also received information from another source confirmed that a resident Nisaba Himan also killed on 23 September. Some residents witnessed his body found in Pisugi with a gunshot wound on the chest. Nisaba Himan is also not recorded in both police’s record and the council. With the addition of nine death victims, the mass riot in Wamena on 23 September 2019 has killed at least 42 people. (To be continued)