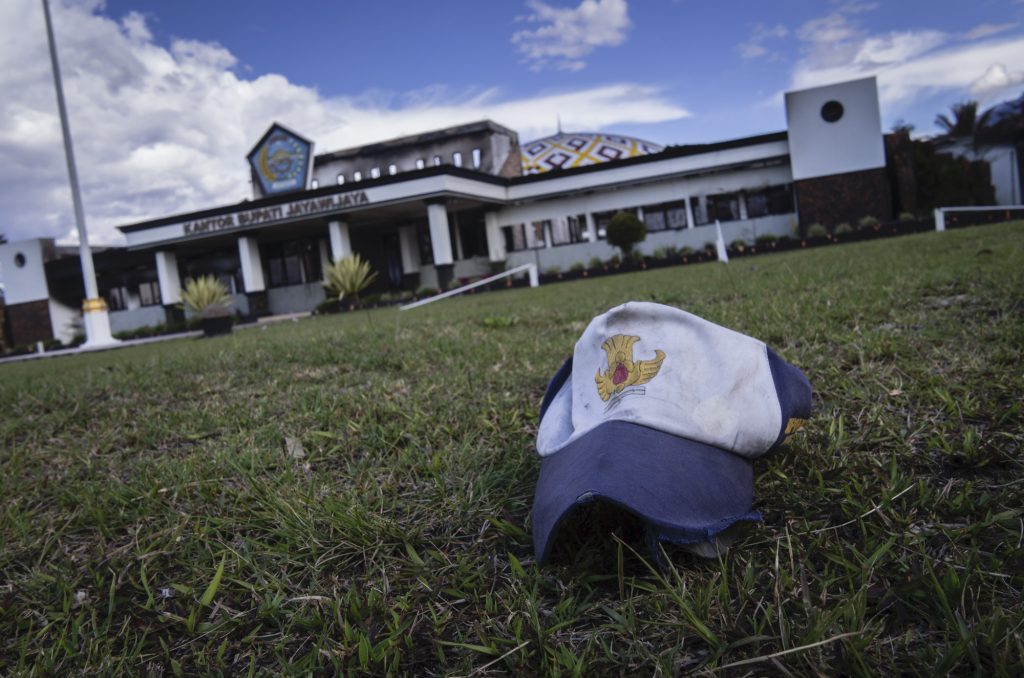 A student’s cap laying on the grass of the lawn of Jayawijaya Regent Office, Wamena. – Jubi/Vembri Waluyas

When a mass riot blasted Wamena, the capital of Jayawijaya Regency, Papua on 23 September 2019, it shocked public sentiments, their sense of humanity. Everyone was shocked and mourned to see how the anti-racism protest exploded into a riot killing at least 42 people and destroying half of the biggest town in Papua’s highlands.

At the same time, everyone eagerly wants to share a collective desire for weaving the already-torn-apart of social relationship and heal the sufferings. On the other hand, the government has many things to concern if they want to rebuild a robust peace in society. This feature is the first part of six articles of “Risking peace in Wamena”.

Mikael Alua drove his motorbike to SMA PGRI Wamena located in Jalan Bhayangkara. On that Monday Morning, 23 September 2019, he must go early to school due to mid-semester exam. But, once he parked his motorbike in front of the school’s gate, Alua were striking.

“I saw broken window glasses of our classroom shattered everywhere. Soon, the School Principal Herry Max Kasiha and I tried to figure out what has had happening to our school. Our school neighbour told us that a group of people came to our school at around 2 a.m. These people destroyed all window glasses in classrooms and school office,” said Mikael Alua in Wamena on Friday (4/10/2019).

But then, he could no longer find out the group’s motive by doing such a crime against his school. Once other teachers and students arrived at school, he was too busy preparing the flag-raising ceremony.

Then suddenly, a group of students shouted out, calling their friends to leave the mid-semester exam. They protested against a substitute teacher who allegedly insulted a student of Grade 11 from Class IPS 2 by calling him ‘monkey’ during the economics lesson on Wednesday, 18 September 2019.

The teacher, named RTS, has just been teaching for a week in SMA PGRI. She was appointed by the Papua Education Office to teach economics replacing Elfrida Panjaitan who are attending the certification training for teachers in Makassar, Sulawesi Selatan. While teaching, she then had a dispute with a student in her class. The student named APB accused her of insulting him by calling him ‘monkey’.

Following the call on strike, on that Monday morning, the students of SMA PGRI asked the School Principal Herry Max Kasiha to follow up the racist taunt by RTS to court. Therefore, according to Mikael Alua, the principal tried to calm the students by explaining the vice-principal Debora Agapa has settled this case on Saturday, 21 September 2019.

Regarding the case, Debora Agapa also recounted the allegedly racist incident at school to the Papua Police Chief Paulus Waterpauw.

“We were confused. Nothing had happened three days ago. [Allegedly racist taunt] It happened on Wednesday. Nothing had been happening on Thursday, as well as on Friday. But then, on Saturday, the students were making noise problematising it. We are the teachers just found out this incident on that day, Saturday, 21 September 2019, when the students crowdedly protested on it. By that day, we tried to reconcile both the teacher RTS and student APB,” said Debora Agapa during Waterpauw’s visit to SMA PGRI Wamena on 7 October 2019.

Mikael Alua admitted that on that Monday morning, the teachers were overwhelmed to calm down their students.

“When we were trying to calm down our students, suddenly a group of students from other schools came and talked about the same racism issue. I don’t know them. Meanwhile, our students keep insisting on suing RTS. It seems that the news of reconciliation attempt by the school authority has spread out to the public on Sunday,” Alua guessed. 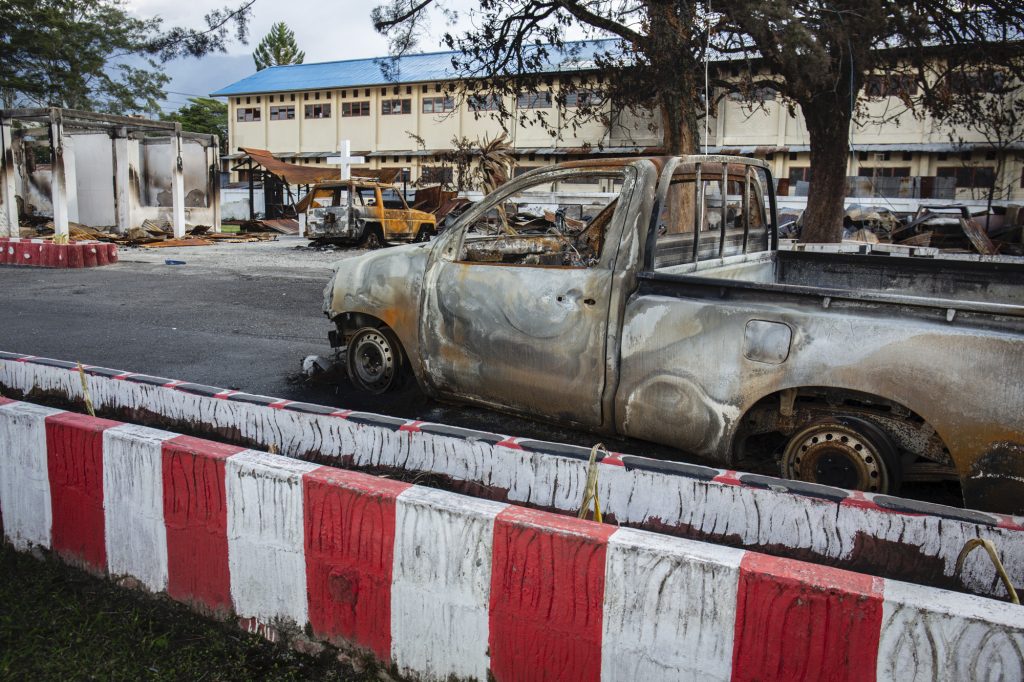 Ruins of vehicles burned by the mob near the Jayawijaya Regent Office, Wamena. – Jubi/Vembri Waluyas

However, he said he felt a little relieved at that moment when seeing some police officers came to school. The officers tried to talk with students who still insisted saying that RTS should take to the police.

“The police agreed on the students’ demand. They then said only the students from IPS 2 could go to the Police Station. But all the students said they all must go,” said Mikael Alua.

So, all students of SMA PGRI Wamena and some students from other schools finally walked towards Jawijaya Police Headquarters through Jalan Bhayangkara. Meanwhile, Mikael Alua, the School Principal Herry Max Kasiha and two other teachers rode their motorbike and arrived at the police station before the students.

“In the police station, we were brought to the intelligence room. When we entered the room, RTS was already there. So we were waiting for the students to come. But they would never have arrived at the police Jayawijaya,” said Mikael Alua.

The students contingent of SMA PGRI never arrived at the Police Headquarters. They walked on Jalan Bhayangkara, had a chance to visit SMA YPK Betlehem Wamena to invite the students there joining their crowd. At the intersection of Jalan Bhayangkara and Jalan Sudirman, the group divided.

To reach the Jayawijaya Police Headquarters, they should walk through until the eastern passing Jalan Bhayangkara. But, some students turned left to visit SMA Negeri 1 Wamena. Meanwhile, the others turned right towards Jalan Yos Sudarso towards the Jayawijaya Regent Office and SMA Yapis Wamena.

The School Principal of SMA Negeri 1 Wamena Yosep Wibisono recounted that the students’ mob were anarchist while entering his school. The crowd threw stones over the window glasses and called students from SMA Negeri 1 to join the protest against racism.

“Everything happened so quickly. The teachers were teaching in the classrooms. They were fear but could not do anything about it. The mob ruined the teacher’s office, threw out over the window glasses. I could only hide in my office,” told Yosep on 7 October 2019.

Having additional supporters from some schools from the city centre of Wamena, the students’ mob came to the Jayawijaya Regent Office. A reporter from TVRI in Wamena, Naftali Pawika who was at the regent office that morning told the students’ crowd arrived at 8 a.m.

“The regent John Richard Banua has not yet come to the office. The students occupied the lawn of the Jayawijaya Regent Office. Although they were threatening some journalists to not taking photographs, they were not violent. Some of them indeed held a wooden stick they collected from the street, but I didn’t see they brought stones or fuel. They just sat down, awaited,” said Naftali Pawika. (To be continued)