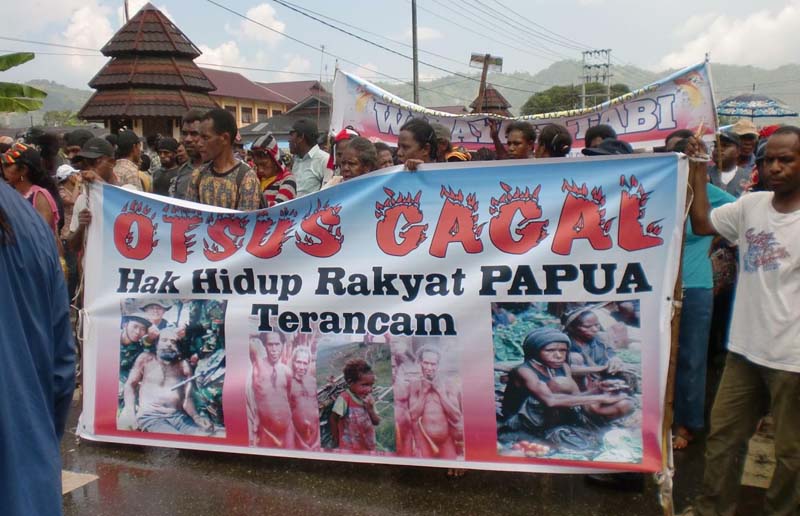 Jayapura, Jubi – After almost 16 years, the Special Autonomy Law has not solved the social gap between Papua and other regions in Indonesia.

The Special Autonomy Law is also a materialization of the highest recognition from the Indonesian Government towards Papuan people, especially the indigenous people.

It is expected to provide opportunities and broaden the participation of indigenous Papuans in all areas of development. However, in reality, many Papuans believed it has not achieved its purpose. But Papua Governor Lukas Enembe wanted to retain it.

“We are really different with Aceh, for instance in the use of full authority of Special Autonomy. In Papua, it is not firmed, and so many interventions from the Central Government to Papua,” he told Jubi in Abepura on Saturday (2/4/2016).

According to Gobai who also the Paniai Regional Customary Council Chief, that each Perdasus (Special Regional Regulation) or Perdasi (Provincial Regulation) always need to be consulted to the Ministry of Internal Affairs, therefore speaking on Papua Special Autonomy is clearly to be cut by the Central Government.

He said the Central Government much believes on ‘spies’ in Papua than the Regional Government. He gave example on the conflict of mining permits that are still overlapping between the authority of Papua Governor and the regents.

“It is happening because of the appliance of two regulations, namely the Law of Regional Government and Special Autonomy Law in Papua Province,” he said.

Meanwhile, the Indonesian councilor of Papua representative the Rev. Charles Simaremare firmly said in line with the rejection of Special Autonomy by Papuan people, and Papua provincial civil servants was happened because of the implementation of Papua Special Autonomy has not been run properly as the authority has not been fully given to the Provincial Government as the administrator. As its reference is not clear, he added, many Special Regional Regulations are certainly not running yet.

“Because if talking about Papua Special Autonomy, it should involve a huge authority and the important role of people is also need to be improved to prosperity,” he said. (Abeth You/rom)

RELATED TO MSG ARRIVAL, THE GOVERNOR INVITES TO FORGET THE PAST

SUSPECTED THE ATTACKERS OF POLICE STATION WERE NOT WEST PAPUA ARMY