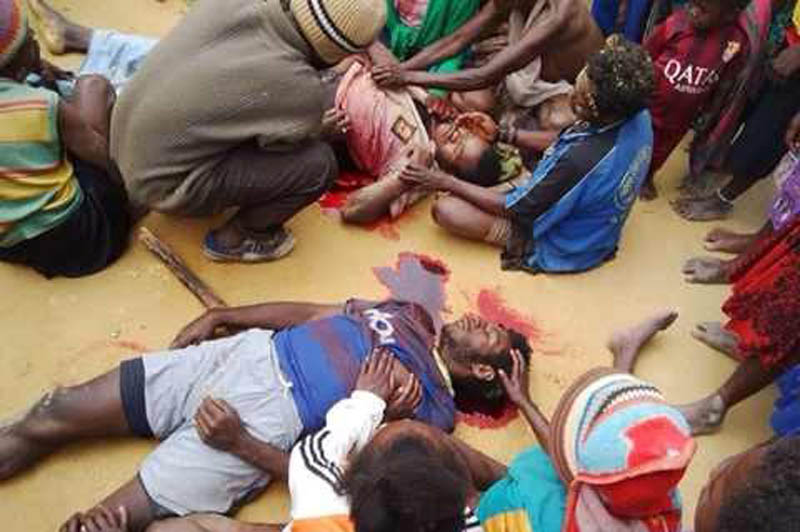 The Chairman of Independent Student Forum (FIM) Papua, Teko Kogoya, said this case is severe human right violation and the students keep continuing the peace rally and monitoring the case until it’s been settled.
“But up to now, the human right commissioners in the Ad Hoc are unable to work properly. They said the State has no budget for this case,” Kogoya among hundreds of students attended in the forum told to reporter.

Paneas Lokbere, the Chairman of SKP HAM Papua, said these activities would regularly be conducted to aware the Papuan young generation about the State’s violence by the security forces.
“We did it (discussion and film screening) to acknowledge the Papuan young generation that his country is continuing to kill Papuans and protect the perpetrators,” said Lokbere on last week.

Further he said the State is still misleading in tackling this issue, because he thought the government only focuses on the provision of the Special Autonomy. “The State remains silent about the shooting case occurred in Paniai on 8 December 2008 as the case of severe human right violation in Papua,” he said.

The chairman of the Association of Indonesian Catholic Student (PMKRI), St. Efrem of Jayapura Municipality, Simon Petrus Bame similarly said the young generation must work hand-to-hand to resolve a number of sever human right violation cases that increasingly happened in this region.
“We see there are two types of human right violation, namely physical and non-physical violation. Film screening is a doctrine to young generation and a revolution is created through collective movement. Besides talking about the cases of human right violation, we must talk about and safe the rights of land tenureship, forest and Papuans to safe our offspring for today and the future,” said Bame.

Meanwhile the chairman of the Christian Student Movement of Indonesia (GMKI) in Jayapura City, Sebi Seblon Ibiah, admitted he would not stop voicing those cases, in particular the Paniai case. He further would fight through his thought, action and doing a change on this land.
“We invite the churches, NGOs, youths, students and people to speak out the humanity values on the land of Papua. What have done by SKP HAM Papua to organize a discussion forum and film screening in each student dormitory and seminary was a mass-based consolidation to fight for justice and truth on our land, Papua,” he said. (Abeth You/rom)

Mopah Airport Closed Due to Volcanic Eruption in PNG