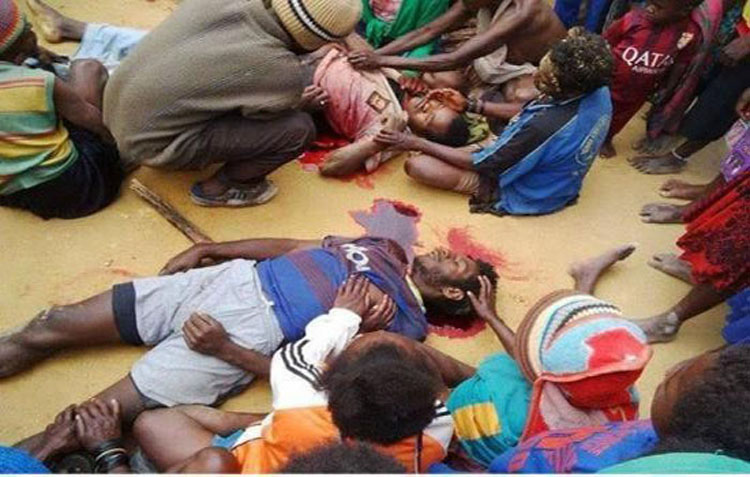 Victorm of shooting case in Paniai on 8 December 2014 - Jubi

Jayapura, Jubi – SKP-HAM Papua (Solidarity for the Victims of Human Rights Violation) expressed fears that the government has shelved investigations into the shooting dead of four students in Paniai on 8 December 2014.

“So many have been missing since the beginning. So many teams to investigate but the result remains unclear,” SKP-HAM Coordinator Peneas Lokbere conveyed in the hearing with the Indonesian Human Rights Commission Papua Representative Frits Ramandey in Komnas HAM Papua Office on Wednesday (16/3/2016) in Jayapura.

According to Lokbere, the security forces’ team, and both teams of the Indonesian Human Rights Commission and NGOs who conducted investigation couldn’t provide clarity on the case. Each was insisted on their own argument and conclusion. Papua Police was not able to reveal the case since the Military personnel were allegedly involved, while no sufficient evidence for the Indonesian Military to question its personnel. Further, it grows harder since the Police/Military former chiefs have been moved.

“Replacing the responsible persons reflected the State’s resistance. It has no intention or commitment to solve this case,” said Lokbere.

And the expected Indonesian Human Rights Commission has no clear commitment either, further said Lokbere. It announced the lack of budget over Paniai case; thus it couldn’t publish the name of Ad Hoc team members to the public.

“Since the beginning, the four commissionaires are always conflicting, not united. Another concern is the case would be terminated due to this replacement,” said Lokbere.

The Indonesian Human Rights Commission Papua Chief Representative Frits Ramandey said he was optimistic in Paniai case resolution. He said his office was optimistic to take this case to the Court, since it contained the human rights violation. “I am very optimistic. It was stagnant because the Police could not investigate the Military personnel, while the Military had lack of witness,” he told to the meeting attendees in his office.

He said all stakeholders must commit to solve this case seriously, in particular the government. Because, Paniai case settlement is actually the entry to build a trust of Papuans who already distrust the government with previous cases.

“Paniai case could become an entry for government to resume the Papuans’ trusts towards the government,” he told reporter after receiving SKP HAM representatives. (Mawel Benny/rom)