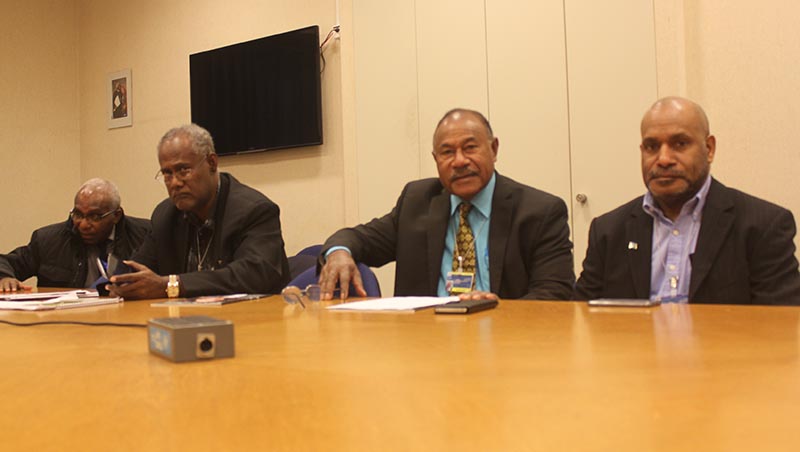 Geneva, Switzerland– The Pacific Island nations of Vanuatu, the Solomon Islands, Tonga, Tuvalu, Nauru, Palau and the Marshall Islands issued a joint statement today, March 2, calling on the UN Human Rights Council to request the UN High Commissioner for Human Rights to produce a comprehensive report on the current human rights situation in West Papua, which has been under Indonesian rule since the 1960s.

Their joint statement follows the separate statements of urgent concern about the situation in West Papua by these countries at the U.N. General Assembly in September 2016.

“West Papua has seen more than a half-century of conflict between native Papuans and the Indonesian government in Jakarta and its military, which has long been accused of grave human rights violations, most notably in East Timor,” said Octovianus Mote, General Secretary of United Liberation Movement for West Papua (ULMWP) on press conference at UNHRC headquarters, Saturday (2/3/2017).

He added Papuans have consistently insisted on their right to a proper act of self-determination and demanded a referendum on independence. The 1969 ‘Act of Free Choice,’ in which Indonesia allowed only 1026 Papuans to ‘vote’ out of the hundreds of thousands eligible, is now widely seen as a sham.

Rex Horoi, special envoy on West Papua issue of Goverment of Solomon Islands said the last three years have witnessed a resurgence of interest in the plight of West Papua throughout the Pacific Islands.  Both the Melanesian Spearhead Group (MSG) and the Pacific Islands Forum (PIF), the two most important intergovernmental bodies of the region, have put West Papua at the center of their deliberations.

“Led by the Solomon Islands and Vanuatu, a majority of the governments have also formed the Pacific Island Coalition for West Papua. The focus of their concern has been on West Papuan human rights, self-determination, and the very survival of an indigenous people and culture in their own land. Fifty years of state-sponsored Indonesian migration has made Papuans a poor, marginalized minority in large parts of the province,” said Horoi.

For decades, West Papuans have sought international scrutiny of human rights and other violations. The province has been virtually closed off to foreign media and outside human rights organizations.  Last year, Indonesia rebuffed ministerial-level fact-finding missions from the MSG and PIF.

The joint statement notes that the Government of Indonesia has neither provided justice for the victims of these violations, nor issued the periodic human rights reviews and reports required of U.N. member states, nor taken any action to address the current human rights situation in West Papua.

Estimates of the numbers of Papuans killed by the Indonesian military and police range from some one hundred thousand into the hundreds of thousands (of a native population of a million-plus Papuans).

A former Dutch colony administered with significant differences from the rest of the Dutch East Indies, West Papua only became an unwilling and official part of Indonesia twenty years after that country’s independence. Papuans and foreign observers, including political leaders of the Pacific region, view Indonesian rule as a ‘second colonialism.’

The decade-old Human Rights Council, the successor body to the UN Commission on Human Rights, is the principal arm of the United Nations responsible for addressing human rights violations. The Council has an elected three-year membership drawn from five geographic regions. None of those countries issuing the joint statement is currently a member of the Council; Indonesia is in the last year of its second (and final) consecutive term. (*)

Ruben Magay : Foreign Press Restriction to Papua is An Attempt Against the Law