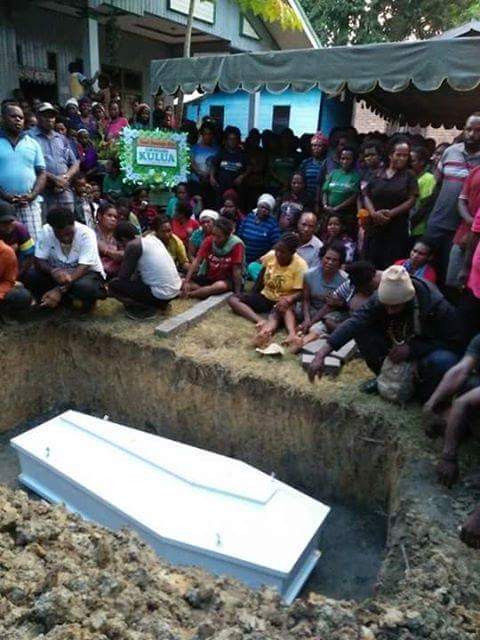 The funeral of Pius Kulua - IST

The funeral of Pius Kulua – IST

Jayapura, Jubi  – Jayapura City Police Resort (Polresta) is still looking for the perpetrators of Theresia Lampyompar (42) murder, whose body was found in front of the Waena steam power plant, on Friday (May 19). However, the police claimed to have information leading to it.

AKBP. Tober Sirait, Jayapura chief resort police confirmed that this case was different from other case relate to Uncen lecturer’s murder a day before. However the police will soon issue a Wanted List of People (DPO) relate to the lecturer murder.

Regarding the sweeping done around sawmill, Perumnas III Waena, Friday (May 19) afternoon in which has no relation with the two cases, the police said they were looking for one convicted murder and theft in Keerom that somehow seen at the sawmill.

Maikel Ilingtamol, a convicted person who was arrested and disabled by a firearm at his feet, has been sentenced to 12 years in prison in Abepura for violating Article 365 and article 338 of the Criminal Code.

“But since October 23, 2016 he ran away. And then he is allegedly did another case with his friends. We received information from the community that he was in sawmill, Yabansai Outbound, that is why we immediately search. We want to catch him on the spot, but he refused and pulls out sharp weapons. That is why we paralyzed him and arrested his friends,” said the chief

The murder of Pius Kulua

Theresia’s dead body found in front of Waena steam power plant turned out to trigger anger of some community group to other tribe’s group of Papuan indigenous.

The angry community group then blockades the road in front of Dian Harapan Hospital, right in front of the funeral home, Friday (May 19) night. About two hundred people stood forming a crowd on the street and yelling at certain groups of people that accused as perpetrators of violence in the city of Jayapura and perpetrators of Theresia’s murder.

As the group was shouting out their anger, two indigenous Papuans who ride motorcycles tried to pass the street. Both of them broke through police who were around the crowd. It was then they were surrounded by several people and immediately beaten and stabbed.

“One immediately fell off from the motorcycle. He was constantly beaten, while other is still safe. They were beaten right in front of a shop across the Hospital (Dian Harapan),”said an eyewitness who saw the beatings and stabbings.

This witness claimed to stand around the motor workshop not far from the location. He was amazed that the police on the scene seemed unmoved. In fact, police who have seen the masses carrying sharp weapons did not do anything to disarm them. There were no warning shots or attempts to disperse the masses, even when both victims were persecuted and stabbed by the masses.

The two victims were brothers from Puncak regency. The younger, Yuvenus Kulua was saved, while his older brother, Pius Kulua died on the spot. The siblings are known to live in the neighborhood across the Kamwolker creek (where the police conducted sweeping earlier in the afternoon).

The Chief of Jayapura resort police, Tober Sirait explained the stabbing took place right in front of the funeral home, as a large family mourner was performing worship and consolation. According to him, the two victims passed by a motorcycle in front of the funeral home. “The police tried to stop but it was ignored, that’s when the family grieves spontaneously out and do persecution, and caused Pius Kulua death,” he said.

The perpetrators of Pius’ murder said Tober had been put on hold by the police and would soon be assigned as suspect.

“We have secured 41 people who perpetrated the persecution against Pius. All of them we questioned, their strong allegations are perpetrators of this persecution,” explained Kapolres.

Denius kulua, a member of the Papuan Legislative Assembly and a close relative of the late Pius Kulua said he handed over the handling of the perpetrators to the Jayapura Police.

“I support process by the Police. And the people of Puncak and Papuans in general are not allowed to make any additional movements,” explained Kulua.(*)