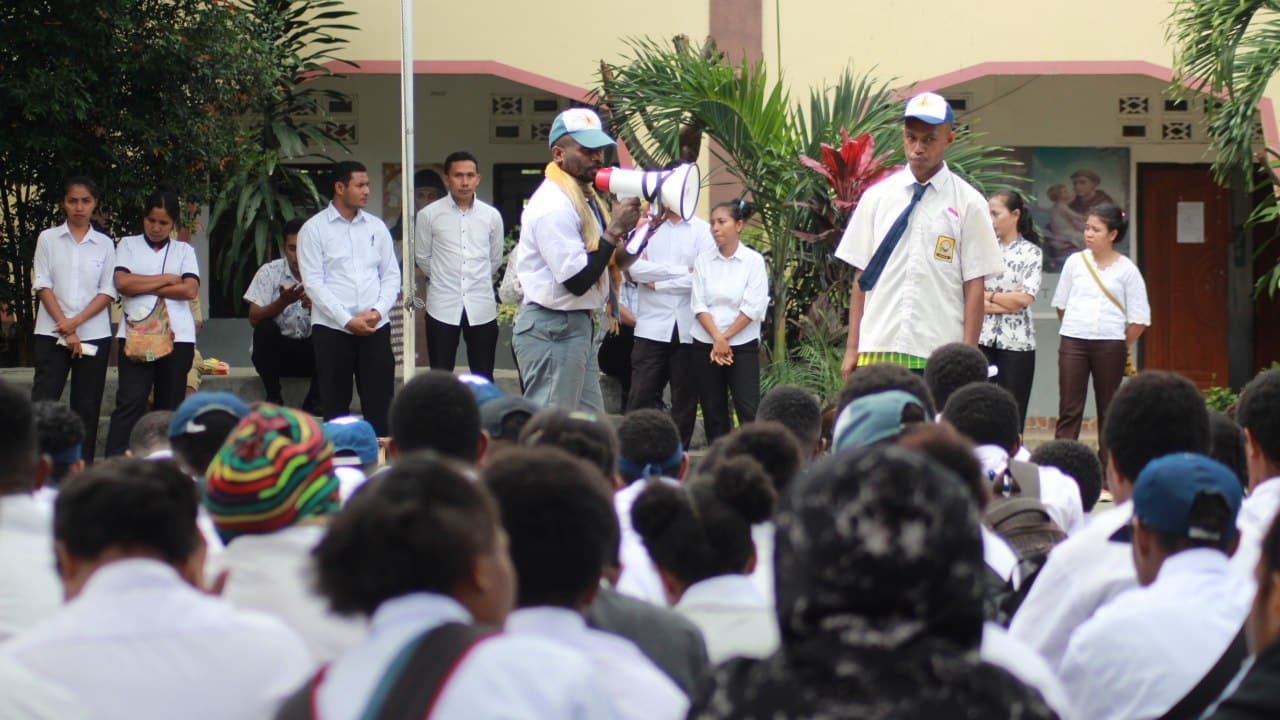 Students of Santo Antonious Padua High School conduct a demonstration at their schoolyard on Monday (9/3/2020) to protest racism taunts by a teacher. – Jubi/Yance Wenda

Sentani, Jubi – Students of Santo Antonious Padua Secondary School held a protest on Monday (9/3/2020) at their schoolyard in Sentani of Jayapura Regency following racism taunts by a teacher on Saturday (6/3/2020) during the scout camp. Students demand school authority to dismiss the teacher.

A student Viktor S Kiya tells Jubi on Monday (9/3/2020) that the incident occurred on Saturday when students got ready for the flag ceremony.

“At that time, only one teacher was ready in the courtyard while the other four teachers were in the hut. They told students to start and lead the ceremony,” says Kiya.

However, students declined the order because they thought it was not their tasks but the teachers. Therefore, some students just sat down when seeing the flag ceremony had not started yet.

Knowing that the flag ceremony would not start very soon, a teacher with an initial MGU was angry. She then blurted out racism taunts and said students have no brain.

“Then, she said [students] have no brain. I witnessed and heard it by myself. I suddenly become so emotional and be offended because of that,” says Kiya.

He then encouraged his friends to leave the courtyard and return to the dormitory. “We stay at the dormitory. The principal [finally came, called us to come down from the dormitory] attended the closing ceremony of the scout camp event,” says Kiya.

Meanwhile, the principal of Santo Antonious Padua Secondary School Fransina Hikinda admitted that she did not know about the dispute because she was at her office at the time of the incident. According to her, the teacher MGU had declared her regret for the occurrence before her and some students.

“The teacher already apologised and admitted that she had made a mistake. She regretted saying those words because she could not control her emotion at that time. She did not mean to say it,” says Hikinda.

Furthermore, Hikinda says this incident would become school evaluation, and she hopes it would not trigger any new issues. Also, she confirms students’ demand to dismiss MGU from the school. However, she could not prompt this demand.

“Their aspiration is difficult to materialise. We lack teachers in this school,” she says.

Jayapura Regent Mathius Awoitauw reminds all residents in Jayapura Regency to not carry some activities led to racism taunts or hate speech.

His statement relates to the alleged racism incident by a teacher that occurred in Santo Antonious Padua Secondary College in Sentani on Saturday (7/3/2020).

“Concerning racism, the government is strictly concerned that this issue should never happen again,” says the regent in Sentani on Monday (9/3/2020).

Furthermore, he says both government and community agreed to fight and eliminate any forms of racism in this country, including in Jayapura Regency that currently become the Harmonious Integrity Zone.

“We will investigate this case. It cannot be tolerable if it has truly happened here,” says the regent.

Meanwhile, Jimmy Fitowin, the Chairman of PGRI (Indonesian Teachers Association) in Jayapura, says the technical institution, in this case, the Education Office, must take a prompt response to the teacher who did racism taunts towards her students at school.

“I just found out about this incident. If it is true, the relevant office and police should take a concrete step towards the teacher,” he says.

It understood that the students of Santo Antonius held a peaceful demonstration at their schoolyard. They urged the school authority to take actions on racism taunts by a teacher. So far, the school authority had apologised to both junior and senior high school students for this incident. Currently, the case is under the police’s investigation. (*)