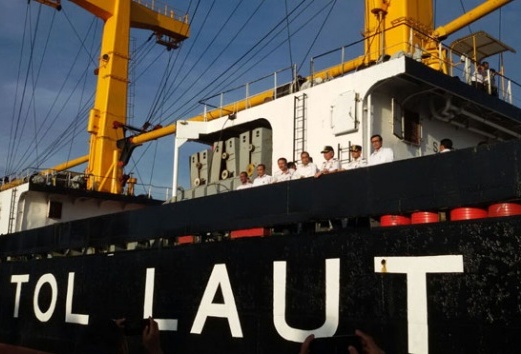 A member of the commission in charge of the economy said that the freeway, which is the program of President Joko Widodo (Jokowi), aims to reduce prices in various parts of Indonesia, including Papua. However, although this program has been implemented, the price of basic commodities in the market has not changed significantly.

“At the moment, consumers cannot distinguish which goods are transported by sea freeway, and which are regular.” There is no special feature that distinguishes it, this condition could be used by distributors and traders,” Mustakim said last week.

According to him, there should be no possibility of supplying goods distributor to use sea freeway services then sells them at the usual price, while they need to transport them using regular services.

“I think its lack on tight supervision, a policy without a mature strategy, (the result) just the same – people will not really get impact from the policy,” he said.

He is still doubt this sea freeway program can really suppress overpriced in Papua.

“In the center (Jakarta) the price of goods in Papua has said to be dropped, including fuel, but if you look at the real market here, it is not, there has been no significant price reduction,” he said.

Member of Commission VI of the House of Representatives, Bambang Haryo said that for the sea freeway program to run according to the government’s objectives, the management of the program will be more optimal if it is handed over to the private voyage, which has already been navigating the islands in Indonesia.

He said that private voyages had already been sailing in areas across Indonesia with 14,000 ships, while new marine vessels were six ships. Without any sea tolls, the distribution of goods is already running.

According to Bambang, there is no impact of reducing prices of goods, because the freeway are not utilized by the parties that should be responsible for stabilizing the price of goods, such as Bulog. It is precisely the trader that adjusts the price with the market mechanism.

“Sea transportation is said as the cause of price disparity, so far it is proofed wrong, because sea transport only contributes 5 percent to the price of goods. The most contributing part is the cost of distribution to the interior that using pioneer aircraft. This is what makes it expensive,” he said. (tabloidjubi.com/Zely)

Healths and transmigrations issues of West Papua delivered in UNHRC